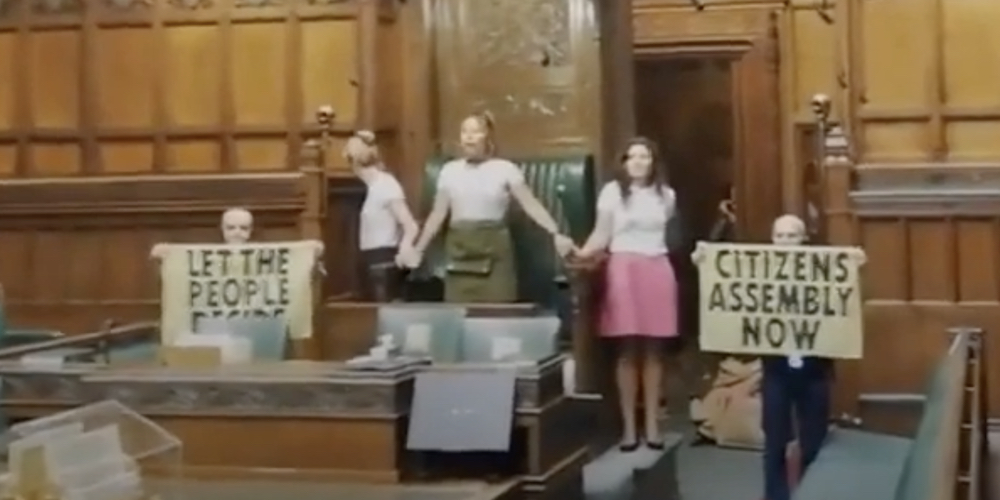 On Friday, members of the Leftist eco-radical group "Extinction Rebellion" descended upon the parliament buildings in London, with a number of them entering the Parliamentary Chamber and gluing themselves together in a chain around the Speaker's chair.

According to a statement released by the group following the stunt, the goal of the protest was to bash the government's handling of climate change, and suggest that there should be more involvement in decision making by ordinary citizens.

"With a new Prime Minister to be chosen next week by a fraction of the country, and the UK suffering from a cost of living scandal meaning millions won't be able to pay their bills this winter, faith in politics is at an all time low," the group wrote. "There is an urgent need to upgrade our political system to allow more representation and give ordinary people a say over the major crises facing us."

They went on to suggest that a "Citizens' Assembly" should be created to deal with climate change in order to "break the deadlock on Westminster corruption, allow more people to be represented, and restore trust in politics."

The group’s occupation of the Parliament comes as Britain’s energy regulator announced that it would be raiding the cap on consumer energy bills to an average of £3,549 ($4,197), up from £1,971 due to low gas levels in the country and decreased imports through Russian pipelines, according to CNBC.

While inside the Parliamentary Chamber, one of the activists delivered a speech.

"We are in crisis, and what goes on in this chamber every day makes a joke out of us all," they said. "We can not afford to carry on like this."

They went on to suggest that the British political system is "too out of date and out of touch" to properly tackle climate change, advocating for the aforementioned Citizens' Assembly.

Extinction Rebellion has made a name for itself both in the United Kingdom and abroad for its dramatic and often militant stunts, which have included delaying the London tube and disrupting the production of a newspaper they disagreed with.