A recent poll showed that 49 percent of likely voters said they’d vote for Gonzalez, a lawyer, and technology business owner, compared to 22 percent for Hardesty, an anti-police, pro-Antifa, one-term incumbent. 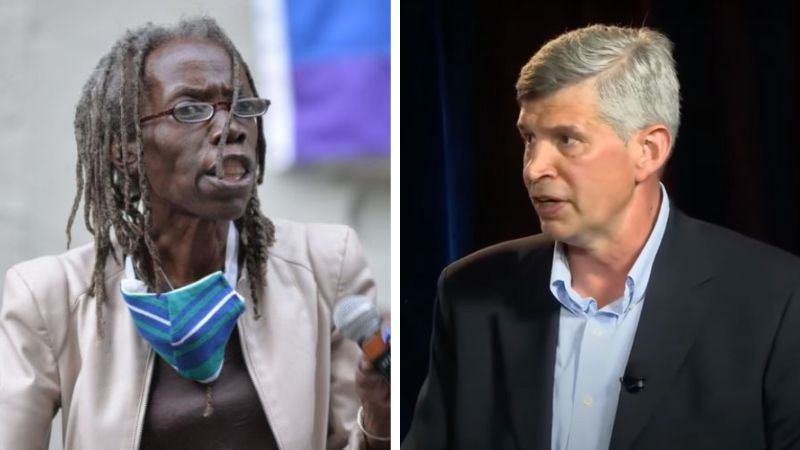 Ari Hoffman Seattle WA
Oct 14, 2022 minute read
ADVERTISEMENT
ADVERTISEMENT
In a city council meeting on Thursday, far-left Portland City Commissioner Jo Ann Hardesty, who is running for reelection, was accused of stolen valor. Hardesty has also called on her challenger Rene Gonzalez to "denounce" The Post Millennial’s editor-at-large Andy Ngo for his coverage of her.

The official Twitter account for Hardesty’s re-election posted on Thursday night, “Will Rene denounce attacks on Jo Ann from his supporter, right wing extremist Andy Ngo? Why is Rene the darling of the far right?”

Ngo has been a frequent critic of Hardesty, showcasing her failed policies and radical affiliations, as well as her personal and financial troubles.

The post from Hardesty came after Ngo shared a video on Twitter of a Portland City Council meeting during which a man, who identified himself as a veteran, brought to the public's attention that he had made a FOIA request for Hardesty’s military service record.

During his testimony, the man claimed that the anti-police council member lied about her service. Hardesty responded to the claim by storming out of the meeting.

According to the man’s testimony, he had previously emailed Hardesty’s office “seeking clarification about some discrepancies” in her military service timeline.

The man claimed that he received no response but had received responses from Hardesty’s office to other inquiries.

According to the man, he had partnered with a non-profit to file a Freedom of Information Act request for her military service records. He cited a 2018 Portland Mercury endorsement of Hardesty which claimed “your campaign had given them paperwork. They said you were honorably discharged in 1979 before continuing in the reserves into 1984.”

“All of that is a lie,” the man stated. “So, I'm just wondering what information you actually gave the Portland Mercury?”

The man went on to say, “But that's not the only misinformation I found… In other interviews and on the city’s website you have said you served aboard the Samuel Gompers from 1978 to 1983.”

“As I said, I have your military records. That's a lie. You served aboard for 13 months.”

The man then stated, “I'm going to move off the military records for just a moment and talk about your fake college degree, Ms. Hardesty. On LinkedIn, you claim a college degree from a Baltimore Community College, but on election filings, you admit, in the 2018 election filings for city council…” but was abruptly cut off by Hardesty, who asked Mayor Ted Wheeler, “Should I allow him to continue to lie about me on the public record?”

The man objected to Hardesty attempting to silence him, to which Wheeler replied, “Let's do this. You finish and then the commissioner gets to respond. How about that?”

The man agreed but Hardesty got up and stormed out of the room.

The man continued by saying, “So back to the fake college degree on LinkedIn, Commissioner Hardesty claims an Associate’s of Business from the Community College of Baltimore, but in the 2018 city filing for city commissioner, she admits that she dropped out and she does not have a college degree.”

“And so,” the man added, “I just think between these numerous lies between her military service record and her fake college degree, you know, she's misleading voters, taxpayers, and the customers of her business.”

“As a Veteran myself, I find this highly despicable, and like I said, I tried to talk to Joanne. I tried to email her, and talk to her privately about this. I tried to schedule a meeting with her scheduler, to talk about this, and I was completely ignored for over a year, and that's why I had to go through the trouble of filing a FOIA request to find out everything she told The Portland Mercury was a lie. All of it.

Mayor Wheeler then stated due to Hardesty’s absence, “Obviously Commissioner Hardesty didn't want to respond. We'll just leave it there.”

The poll commissioned by The Oregonian/OregonLive showed that 49 percent of likely voters said they’d vote for Gonzalez, a lawyer, and technology business owner, compared to 22 percent for Hardesty, an anti-police, pro-Antifa, one-term incumbent. 29 percent said they were undecided.