Jeff Younger lost custody of his 9-year-old twins because he opposed the medical transition of one of them. His ex-wife began pushing for gender transition when the child was 3-years-old. 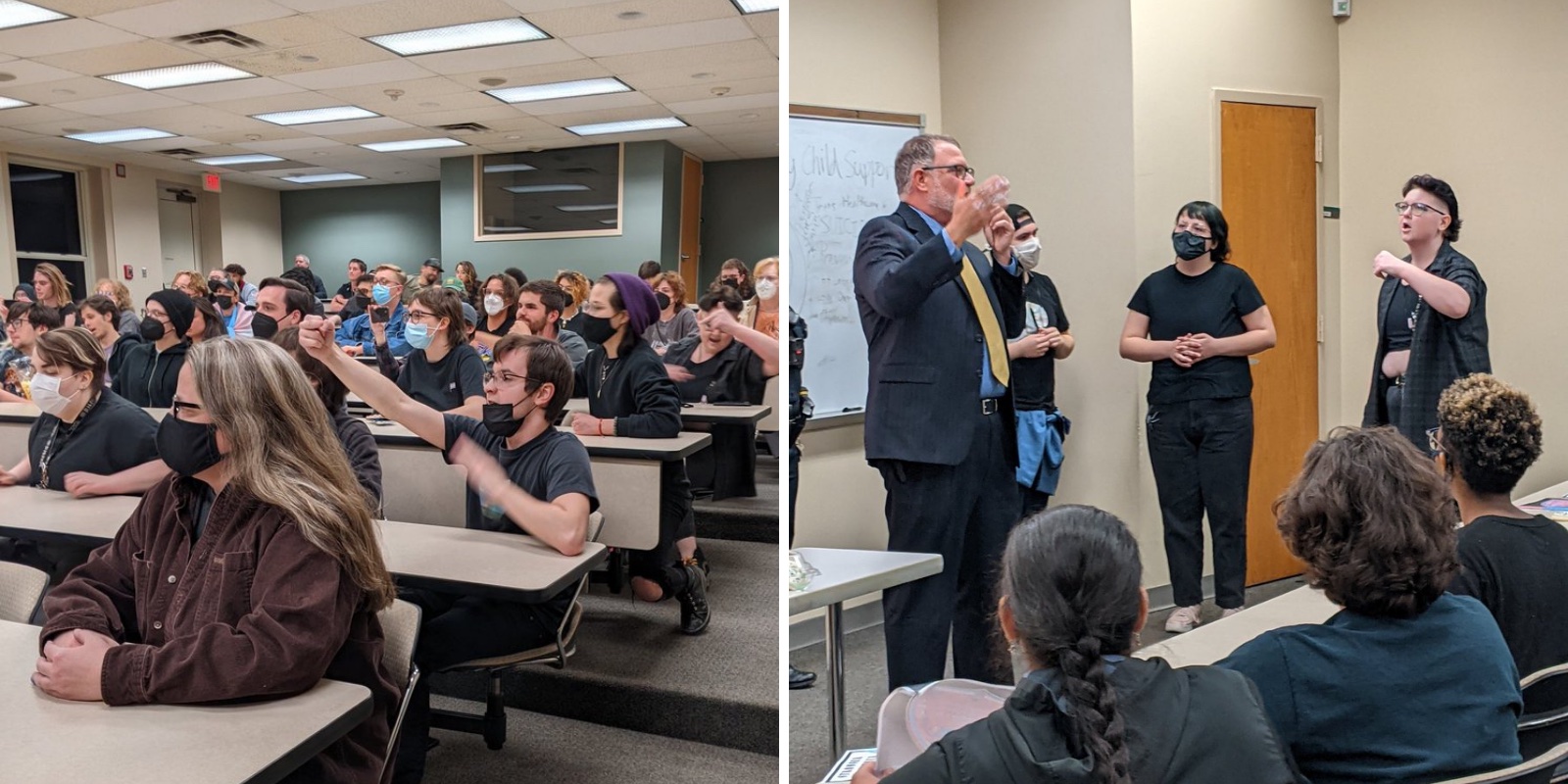 A University of North Texas classroom in Denton erupted into chants of "f*ck these fascists" and slammed their fists on the desks as Jeff Younger tried to speak on Wednesday. Younger was not thrown off, telling them to be "louder!"

Younger, who is running for a seat in the Texas House, lost custody of his 9-year-old twins because he opposed the medical transition of one of them. His ex-wife began pushing for gender transition when the child was 3-years-old.

Younger came to speak to the school, hosted by the Young Conservatives of Texas, noting that he has "attracted national attention defending his young son against being forcibly transitioned by his ex-wife." Younger opposes the medical gender transition of children.

Younger tried to speak to the room, but was repeatedly shouted down before he was escorted out. He was joined by Kelly Neidert, a student who is part of the conservative students' group. She had invited Younger to speak. He encountered a mob of far-leftist activists waiting for him outside, and was ushered by security to a waiting car.

Conservative students were reportedly chased from the building. Far-leftist activists and students harassed members of the Young Conservatives of Texas as they left the building where Younger had attempted to give a talk.

The Young Conservatives of Texas called the activists "abusers" and accused them of "child abuse" as the activists yelled "protect trans kids." A YouTuber, who organizer Kelly Neidert told The Post Millennial wasn't with their group, yelled that activists wanted to "protect kids by cutting their penises off."

The left-wing journalist who documented these happenings has since deleted their tweets, but they have been archived. Neidert said she thought once Andy Ngo tweeted out the events, the far-left journalist took down his coverage.

"I think to the journalists that posted privated their account and blocked a bunch of people took everything down because we were getting the support and so they didn't want that to continue," Neidert told The Post Millennial.

For Neidert, the "most jarring part" of the event was after Younger had attempted to speak, which went on for about 45 minutes, and she and Younger had left the building. She was outside, Neidert said, a target of the mob, and was separated from police officers who were escorting Younger to a car.

"I was with two officers at this point and they pushed me inside of the closest building," she said. "So we go in this entrance, it's kind of the side entrance is pretty much in a stairwell. So we get in the stairwell, the policeman lock the door and then they run me off to the main hallway of the building. But down the hallway you can see one of the entrances. And there was just a mob of people outside."

"I don't know if the door was locked. I don't know if it was unlocked and they just hadn't tried to come in at that point," Neidert told The Post Millennial. "But they were banging on the windows and so the cops understood like, 'we can't go out that way.' And so then they turned me back around. They're pushing me and we get back to the stairwell we came in and they have me running upstairs."

They made it to the third floor, she said, and the officers were looking for an open door, "but the secure ones all seem to be locked," she said. "Finally, we get to this janitor's closet, and they push me in there, they put an officer in there with me, and then the other officer we were with at that point, leaves."

"Then all of a sudden we start hearing doors opening and closing. Like it's really loud," she said. "We could hear that and so about the police officer turns the lights off. And we're standing there in silence. Again, the light was off. I couldn't really see but I do he had his hand on his holster. We start hearing people coming up, we just hear like shrieking, like just I don't know how to explain, just awful, a person shrieking. When they come down the floor they jiggle the handle of the door to see if they could find us."

It was shortly after the event was publicized that Neidert and her group realized that this talk was going to gain far more attention that the group's usual offerings. A student questioned her in the library when she was printing flyers, and when she recorded the confrontation and posted it, the TikTok video went viral.

"And so once word got out that this event was the one I was printing these flyers for, because the flyer said 'criminalize child transitions,' people kind of figured out what it was for. And that's kind of when everything really took off," Neidert told The Post Millennial.

"After that," she said, "it became clear that it wasn't going to just be a smaller meeting with just our people. That's when kind of the threats of protesters started popping up." She said that someone tweeted out her parents' address. This after a petition circulated on campus last semester to have her expelled, for which signatures jumped as the recent events unfolded.

It showed students arguing over flyer opposing the gender transition of children, which were distributed on campus by the Young Conservatives of Texas. Texas has been under scrutiny since Attorney General Ken Paxton said that medically transitioning children is a form of child abuse and should be treated as such under the law.

In the video, two students are confronted over the flyers, with another student saying "How do y'all like live, honestly? Y'all pretend to be Christians, y'all aren't even Christians, get the f*ck out of here."

"Alright, have a nice day," the student filming says.

In response, the student who opposes the fliers says "Fuck you, stop this like 'I'm kind' bullsh*t. Don't do that. F*ck y'all."

Neidert said that after she printed out the flyers and the video from the library went viral, she encountered hundreds of flyers around campus, taped everywhere, she said.

"I started seeing all of these weird pieces of paper on every single lamppost and taped to buildings," Neidert said, "and so I walk up to one, and it's a flyer with my name on it."

She gave an example of what they said, such as "Kelly Neider thinks Larry the Cable Guys peak comedy" and "Kelley Neider has the "energy of off brand health cereal."

"Just very bizarre things like that," she said, guessing that "it was their attempt to meme."

In response, University of North Texas President Neal Smatresk said that, after Paxton's statements that transitioning children is child abuse, it might have been "particularly difficult for the transgender members of our community" as a result of "the intolerant views of a handful of campus members."

He said in a campus-wide email: "Here on our campus, we honor our First Amendment rights, even when we don’t agree with others’ opinions. Our views, or our very existence, might be challenged in ways that feel incredibly hurtful. Especially in those moments, I want you to know that you are a valued member of our Mean Green Family. We value diversity of thought because it helps shape us all, whether it’s exposing us to new ideas or reaffirming who we want to be in the world."

Neidert said that after the university president put out that statement, she was "looking at what Paxton and [Governor Greg] Abbott had said.

"And I said, 'Well, you know, my president of my university is going to call my views and tolerant and hurtful. But my governor, Governor Abbott, is completely on the same page with everything I believe it. So how can you know this? How can the President of the university be saying this when this is like a common belief like with, you know, 50 percent of people in America whatever, even more so in Texas."