The FBI has recently made posts on various social media, recommending that "family members and peers" turn people in to the FBI if they suspect them of "homegrown violent extremism". 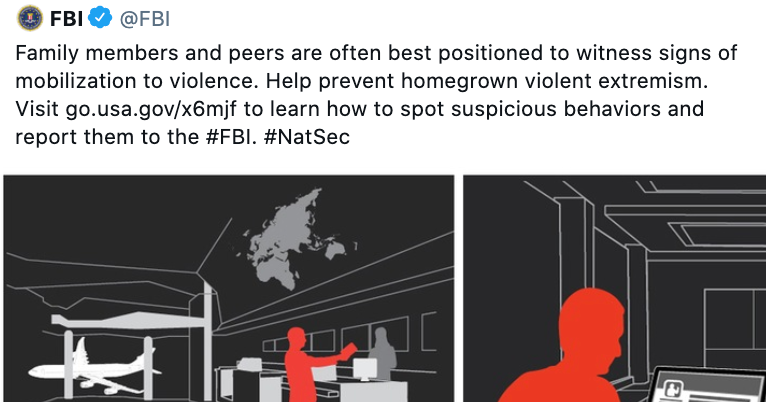 The FBI has recently made posts on various social media, recommending that "family members and peers" turn people in to the FBI if they suspect them of "homegrown violent extremism".

"Family members and peers are often best positioned to witness signs of mobilization to violence. Help prevent homegrown violent extremism. Visit https://go.usa.gov/x6mjf to learn how to spot suspicious behaviors and report them to the #FBI. #NatSec"

The Twitter post also includes a link to a booklet put out by the Department of National Intelligence (DNI), telling what warning signs to look for in your friends and loved ones.

The "indicators" in the booklet are ranked, some of them being "highly diagnostic on their own", others "require one or more other indicators to gain diagnosticity [sic]." As well, the booklet concluded with "risk factors" to watch out for in others.

"REPORT THE LEGO SETS OF YOUR FAMILY", quipped author and journalist Jack Posobiec, referring to the fact that the FBI famously found a Lego replica of the Capitol at the residence of one suspected "extremist":

Former Ambassador and Director of National Intelligence Richard Grenell called out the FBI for its "credibility problem," saying that their statement was "outrageous."

"AntiFa is the #1 domestic terror organization in America. Maybe you should stop ignoring them," says attorney and former Trump campaign staffer David Whol: