"You will not get away with destroying Canada, Mr. Trudeau," one protestor yelled into a megaphone as he and other Liberal ministers pulled up in their motorcade. 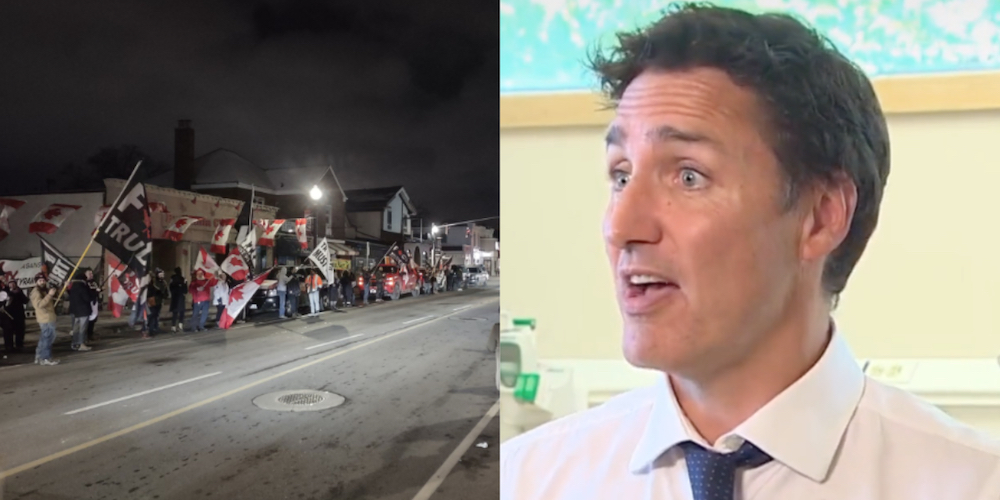 Jarryd Jaeger Vancouver, BC
Jan 24, 2023 minute read
ADVERTISEMENT
ADVERTISEMENT
On Monday, Prime Minister Justin Trudeau was met with protestors as he and other Liberal ministers arrived in Hamilton, Ontario to take part in the cabinet retreat.

Those in attendance pulled no punches while voicing their displeasure, calling out the Canadian leader for his numerous shortcomings.

"You will not get away with destroying Canada, Mr. Trudeau," one protestor yelled into a megaphone as he and other Liberal ministers pulled up in their motorcade. "You will be held accountable for what you have done to the country!"

The man continued to rant about Trudeau's soft approach on China, as well as his ties to the "globalists" at the World Economic Forum. "Your job is to serve us, not the globalists," he said. "You have betrayed Canada!"

Demonstrations continued into the evening, with protestors lining the streets. Many carried Canadian flags and signs expressing their disdain for Trudeau as cars drove past honking, making the scene reminiscent of the Freedom Convoy that began around this time last year.

"For the last eight years Trudeau's been trying to divide Canadians," one man said. "If anything he's made us closer together." He and others then joined in a chorus of "F*ck Trudeau"s.

As CP24 reports, during the three-day retreat, Trudeau and his Liberal colleagues are expected to cover a lot of ground in preparation for Parliament's return to action next week.

Aside from discussing the country's ongoing economic woes, the group will likely try to make progress regarding a healthcare plan being explored by the federal and provincial governments.

The latter have asked the former to increase their share of healthcare spending to help fix systems that suffered under Covid-19 and have not yet bounced back.

Trudeau has expressed a willingness to go ahead with the provinces' desires, but stipulated that any extra funding would only come if they could prove it would go to good use.