Newly-disclosed records contradict testimony by ex-Finance Minister Bill Morneau that he had scant personal contact with a federal contractor, WE Charity. 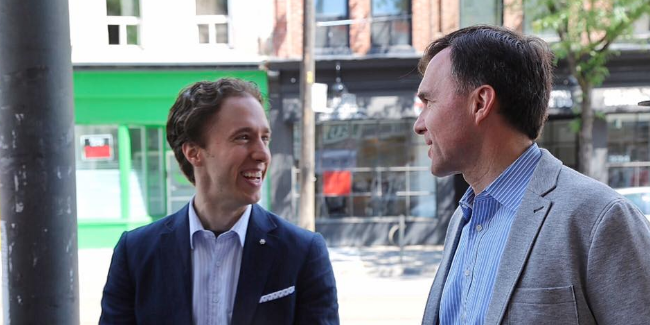 Newly-disclosed records contradict testimony by ex-Finance Minister Bill Morneau that he had scant personal contact with a federal contractor, WE Charity, according to Blacklock’s Reporter.

The finance department released a series of emails from Craig Kielburger, co-founder of WE Charity, that included some rather friendly messages starting with “Hello Bill.”

In an April 26 note Kielburger says, “Hello Bill, it was incredibly thoughtful of you to call. Thank you very much... Warmest, Craig.”

Bill Morneau stepped away from his duties as Finance Minister on Monday after a breach of the Conflict of Interest Act. He failed to disclose the fact his daughter was hired by WE when she graduated college in 2019 and he failed to tell the ethics commissioner that he’d accepted $41,366 in all expenses paid visits to Ecuador and Kenya, all from WE Charity.

On May 22 Morneau voted in favour of a $43.5 million grant to We Charity to manage a national student aid program during the pandemic. He said he did not believe there was a conflict of interest.

Morneau regretted not telling the ethics commissioner but made it known he and the Kielburgers had little contact. During a meeting of the finance committee on July 22nd, Michael Cooper, Conservative MP for St.Albert--Edmonton asked Morneau how often he speaks to Craig Kielburger. Morneau said he “had exposure to him on numerous occasions” but didn’t have “any particular regular communication.”

Morneau told the committee, “the only time I have any recollection of communicating with anyone from the We organization was on Sunday, April 26” he says he called Kielburger.

We now know this was a blatant lie. Records released by the finance department clearly show email conversations including :

April 10 2020 - “Hi Bill,  I hope this finds you, Nancy, Henry, Clare, Edward and Grace enjoying some well-deserved down time over Easter together…You once told me you sought public office to make a difference, and this is certainly the most defining impact you will ever have for the country…Warmest, Craig”.

In an email written on May 7, also released by the department, Assistant Deputy Minister Michelle Kovacevic described Morneau’s office as “besties” with Kielburger.

Pierre Poilievre,MP for Carleton, told reporters “public servants believed there was a friendship between the Prime Minister, the finance minister and We Charity, and they’re screaming out with extraordinarily unusual language in these memos that they are under deep pressure to recommend this group.”