Looming over tonight’s federal leader’s debate hosted by Macleans and CityTV was the absence of Prime Minister Justin Trudeau. 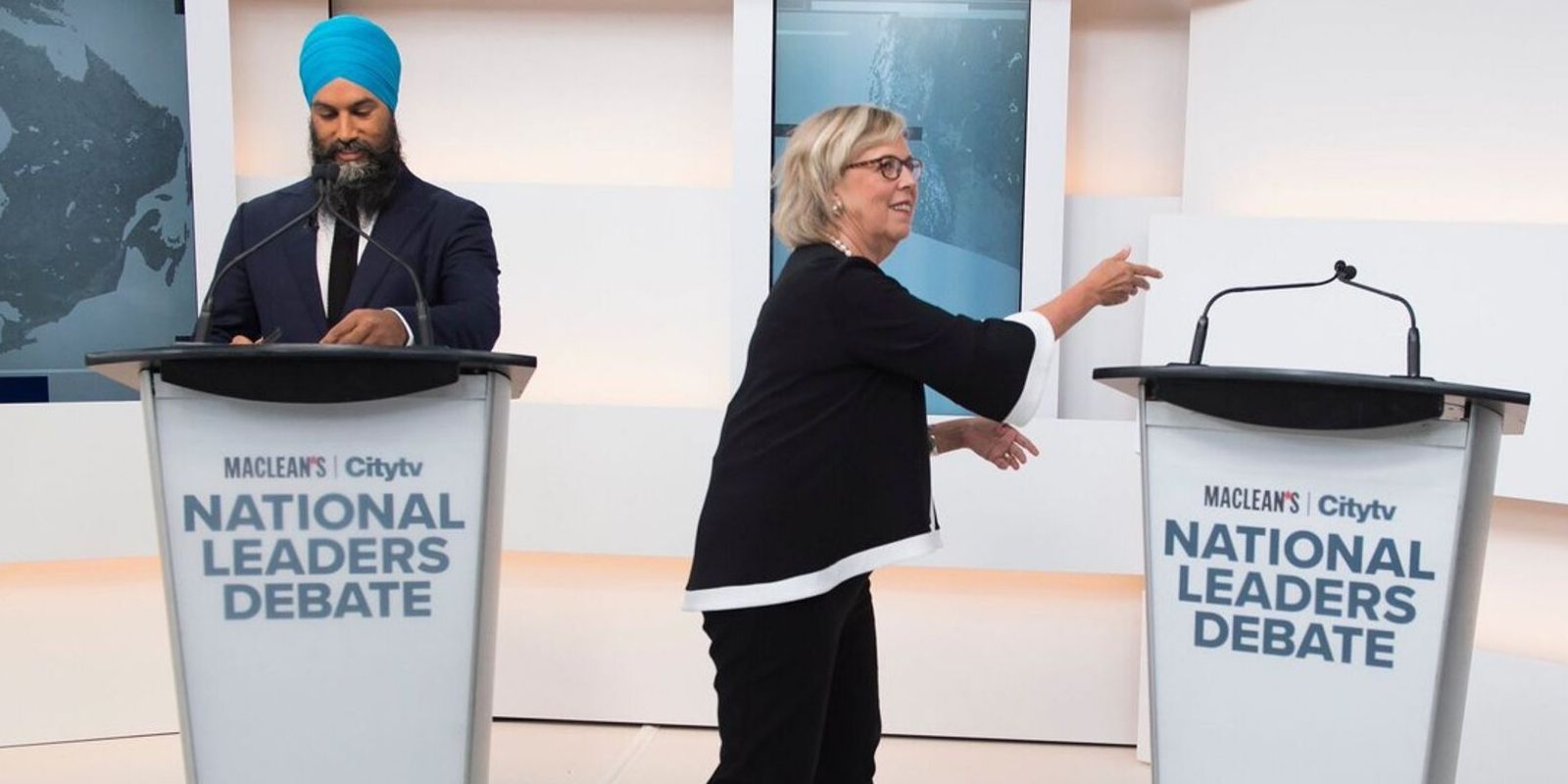 Looming over tonight’s federal leader’s debate hosted by Macleans and CityTV was the absence of Prime Minister Justin Trudeau. At the same time protestors remained outside taking the network to task for not inviting PPC leader Maxime Bernier.

Conservative Party leader Andrew Scheer faced the brunt of the attacks in Trudeau’s absence from fellow leaders Jagmeet Singh of the NDP, and Elizabeth May of the Green Party.

The debate was split up into several segments dealing with topics like the economy, indigenous affairs, the environment and foreign affairs among others.

From the very beginning of the debate, Singh went on the offensive against Scheer, accusing his party of hiding the social cost of their tax-cutting program.

Singh, implied that, like his provincial counterpart Doug Ford, a Scheer government would make cuts to healthcare and social services. The Conservative Party leader denied these accusations.

“Mr Singh, I have made a firm commitment that I will ensure that under a Conservative government, funding for healthcare and social services will continue to increase,” said Scheer.

After the first questions, the three leaders immediately began to talk over one another seeking more air time. This interruption was a reoccurring theme during the night’s events.

On many things regarding the economy and environmental issues, Singh and May seemed to agree, including the goal of universal pharmacare. Some disagreement arose about the way to finance those plans or the means to achieve them.

May accused the NDP leader of not having a costed plan which detailed exactly where the money would be coming from for his plan to implement universal dental care.

On Quebec’s religious symbols ban, or Bill 21, all three leaders were in consensus about their personal opposition to the ban but they announced that they would not be interfering with Quebec’s jurisdiction.

“Its legislated discrimination, it’s sad, it’s hurtful,” said Singh, while adding that he recognized “this is within the jurisdiction in Quebec.”

Regarding indigenous issues, May came out stating that her government would be fulfilling the recommendations of the truth and reconciliation commision as well as the Missing and Murdered Indigenous Girls and Women report.

“We will do these things and that’s just the beginning of working for real justice,” said May.

Singh once again attacked Scheer over a recent court ruling that would see the government paying billions in damages to Indigenous children over abuse and neglect at the hands of the government’s care.

“I didn’t hear if you would accept the ruling or not. This is Indigenous kids that are not getting equal funding. Mr. Trudeau certainly hasn’t listened to rulings in the past, he’s appealed four or five times previous rulings,” said Singh.

Another issue that arose during this segment was the Conservative Party leader’s stance on the UN’s notion of “free, prior and informed consent” when it comes to consultations with Indigenous groups over development projects.

Scheer’s position was that when implemented into law, the concept would allow a few groups or tribes to potentially veto any project that would benefit indigenous people as a whole.

On the environment, Green Party leader Elizabeth May took the other candidates to task over their lack of commitment to fighting climate change. She touted her party’s “science-driven” policies as the only solution for “hanging onto human civilization.” Among her suggestions was the proposal that the government should have an interior cabinet exclusively to tackle this issue.

Singh took to the offensive against May on this segment. Although he admitted his party’s positions were very similar to the Greens, he pointed to four things on which they differed including her alleged lack of support for women’s reproductive rights, and her willingness to work with the Conservatives, among other things.

May denied the accusations, saying: “I;m not going to go down the little rabbit hole Mr. Singh just created, people can check that nothing he said was true.”

The last and final segment of Thursday night’s debate was foreign policy.

On China, all of the party leaders agreed that securing the release of two Canadians held captive by the authoritarian state was of the utmost importance.

“We can show resolve, we can stand up for ourselves,” Scheer suggested. “As prime minister, I will pull the funding from the China-run Asian Infrastructure Bank.”

Throwing a curve ball, Maclean’s journalist Paul Wells asked Scheer about his support of Brexit, which Scheer stood by, prompting May to attack.

“The referendum was won in deceit,” said May claiming that the campaign deceived voters using social media and data manipulation.

Finally, the debate ended with discussion of NATO defence spending and how to handle Donald Trump.