GENUIS: Beware the new McCarthyism of the progressive left

The left should be challenged for its increasingly McCarthyist approach, but conservative parties have to be sensitive to this as well. We should be wary of indulging the McCarthyist instincts of the left every time we face an accusation. 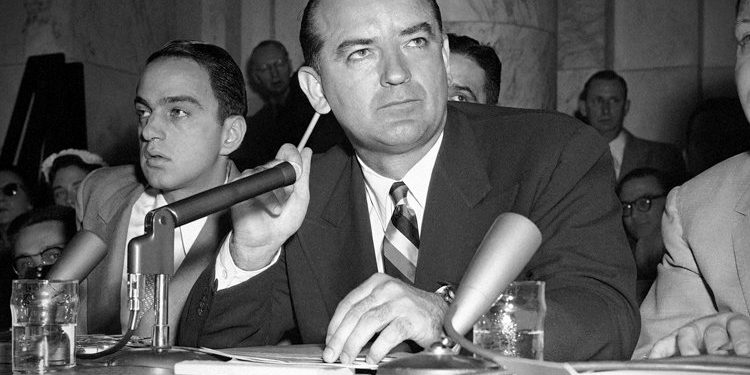 In the 1950s, US Senator Joseph McCarthy was known for liberally accusing anyone and everyone of being a communist.

In the context in which these accusations were made, they were devastating. Many people who were not communists still had serious damage done to their careers, because the accusations created doubt and fear about where they stood. McCarthyism used the politics of fear to devastating effect.

Senator McCarthy’s tactics eventually earned him censure by the US Senate, and his name has become synonymous with reckless slander and demagoguery.

But today, ironically, many of those in the so-called progressive left who might once have been his victims have shamelessly adopted his tactics.

Today’s McCarthyists using epithets like “racist,” “misogynist,” “homophobe,” and “white nationalist” instead of “communist.” The labels are different, but the tactics are the same.

How does someone come to get accused under the circumstances of today’s “new McCarthyism?” The most common way is guilt by association. Can you be plausibly associated with someone with odious views?

Did you know them socially, get photographed with them, or speak to the same group of people that they did?? Perhaps you associated with them before they took on certain odious positions. Perhaps you retweeted someone saying something perfectly reasonable, without noticing that the same person had tweeted something monstrous a while ago. Perhaps you appeared on a show or podcast to explicitly challenge the prejudices of the host – and yet the pictures alone can be made to tell a very different story.

A person can also come to be accused based on brief out-of-context clips of remarks they have made, in public or even in private, potentially long before they chose to pursue public life. Some of these clips may sound genuinely monstrous.

But we have probably all been in situations where we meant to convey one idea and ended up choosing the wrong word or formulating an idea in a way that could be misunderstood. Perhaps you retweeted a tweet, liked a social media post, or repeated a phrase without fully understanding some aspect of its meaning. These things happen often in normal human society, by accident and without malice.

I think in any normal or civilized conversation a person would be given the opportunity to say “Oops, I didn’t mean that at all the way it sounded, let me start again.”  We would expect this courtesy to be afforded especially to individuals who have a long track record of expressing views and acting in a way diametrically opposed to the out-of-context clip.

A local mayor I know, a former Liberal candidate, recently liked an off-the-wall tweet critical of Muslims. He says he has no recollection of it and must have done it by accident. I believe him. But that didn’t stop the then-editor of the local paper from deciding that the error merited a prominent opinion column. Why the story? Is it so implausible that someone bumped the “like” button while scrolling quickly?

More prominently, consider the case of Caylan Ford, a former UCP candidate in Calgary. Caylan is a Chinese Buddhist and a Falun Gong practitioner. She has done extensive work on human rights and has worked for Global Affairs Canada. ?Presumably GAC does some screening, and is careful not to put bigots into influential positions. I got to know Caylan through her work on the issue of international organ trafficking, and her personal commitments on these issues are genuine.

Caylan resigned as a candidate because of some things she may have said in a private message with someone she thought was a friend. She resigned for fear that this story could have put her party in a compromised position. Unfortunately, the full context of the conversation was never given.

I make no defense of the comments as they were alleged to have been made by the far-left fake news generating “Press Progress” – but all of Caylan’s life work makes it really hard to imagine that she believes or has ever believed what she allegedly said. She clarified as much as soon as the story broke.

Even in cases where a past remark may actually have reflected the views of a person at that time, people can also legitimately change their minds. An individual may have come to certain conclusions, which they then revisit based on new information or experience. It is good for people to be willing and able to change their minds.

People should generally be judged on their present views as opposed to their past views. There may be exceptions, where a person changes their views so many times or so capriciously that they are not credible or trustworthy, but those cases should be the exception.

It is worth noting how the resurrection of past retweets or comments, re-interpreted and misconstrued, can particularly impact people who lack privilege. I have intended to pursue politics from a young age, and so have always sought to express myself judiciously and precisely, at least in public or online.

English is my first language, so I am at less risk of misunderstanding a word in a retweet or accidentally saying something that sounds different from how I intended than someone who learned English more recently. (I certainly have made linguist errors in French during private conversation, which could have got me in big trouble if made on camera).

The new McCarythist ethos may put those who did not have the privilege of certain political and linguist training, or the privilege of expecting and planning for a life in politics from a young age, at greater risk.

We should aspire to a politics in which people are judged based on what they think and believe. Politics should be about policy proposals, debated on their merits. People with odious beliefs, be they communists or racists, should not be ?elected to public office.

But the proliferation of McCarthyite attacks is bad for politics, bad for the quality of public debate, and bad for society.

The left should be challenged for its increasingly McCarthyist approach, but conservative parties have to be sensitive to this as well. We should be wary of indulging the McCarthyist instincts of the left every time we face an accusation.