Greta Thunberg busted for misleading public about her train voyage 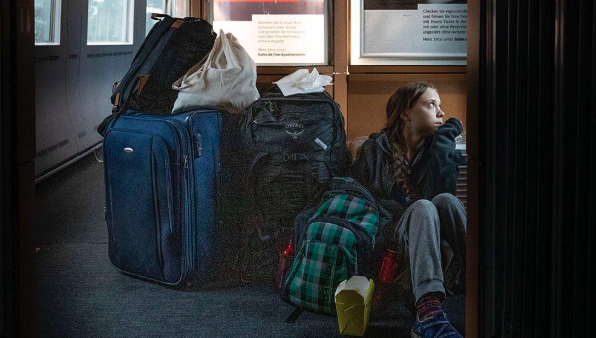 Poor Greta Thunberg. The 16-year-old Swedish climate activist renowned for skipping school and accusing world leaders of “doing nothing,” allegedly had to travel in a little less comfort than what she is used to on her way home from the UN Climate Conference in Madrid and tweeted about it:

“Traveling on overcrowded trains through Germany. And I’m finally on my way home!”

Deutsche Bahn, Germany’s state railway company, however, had this to say:

“Dear #Greta, thank you for supporting our railway in the fight against climate change! We are happy that you travelled with us in the ICE 174. And that with 100 percent eco electricity. It would have been even better if you had also mentioned how friendly and competent the team looked after you in your seat in First Class.”

This seems to suggest that Thunberg is willing to bend the truth to suit her agenda, although, the day after—after a backlash on Twitter—she made clear that she had only been on the floor for part of her journey, and that overcrowded trains were in fact a “great sign because that means that the demand for train travel is high!”

Although many wished Greta a good journey home, there was plenty of criticism, too, not just directed towards the activist, but towards Deutsche Bahn for poor service, and for disclosing that she had indeed been travelling with them (even if Greta had tweeted about her journey before DB replied to her on Twitter).

This stunt has been tried before. Three years ago, Jeremy Corbyn, the leader of the UK Labour Party who lost the election to Boris Johnson and the Conservatives last week, claimed that the train he was travelling on was overcrowded and was shown sitting on the floor of the carriage, making a political point about alleged under-funding and mismanagement of the British railways, arguing they needed to be re-nationalized.

Yet later he was found to have passed through an almost empty carriage, where he could have chosen a comfortable seat with a view and a table if he had so wished, before he made the video on the floor of the corridor instead.

Like Corbyn, Thunberg seems to thrive on pointing out faults in our society, and her mission is to show that we need to “change the system.” And like so many angry, young protesters before her, “everything” is wrong—she even admits to this in her latest op-ed, co-signed by Luisa Neubauer and Angela Valenzuela:

“…the climate crisis is not just about the environment. It is a crisis of human rights, of justice, and of political will. Colonial, racist, and patriarchal systems of oppression have created and fueled it. We need to dismantle them all. Our political leaders can no longer shirk their responsibilities.”

Being economical with the truth, no matter what your intentions are, tends to come back and bite you. If she wants to keep sympathy for her cause strong, perhaps her team of PR consultants should make sure she doesn’t exaggerate her plight. After all, most 16-year-olds can only dream of travelling the world on state-of-the-art yachts and in first-class train carriages while skipping school for months at a time.