In every major city of North America and Europe, last week's anti-Israel rallies turned ugly in a way we in Canada have not seen before, with rock-throwing, Israel flag burning and outright assaults reported. (Photo: Yanky Pollak) 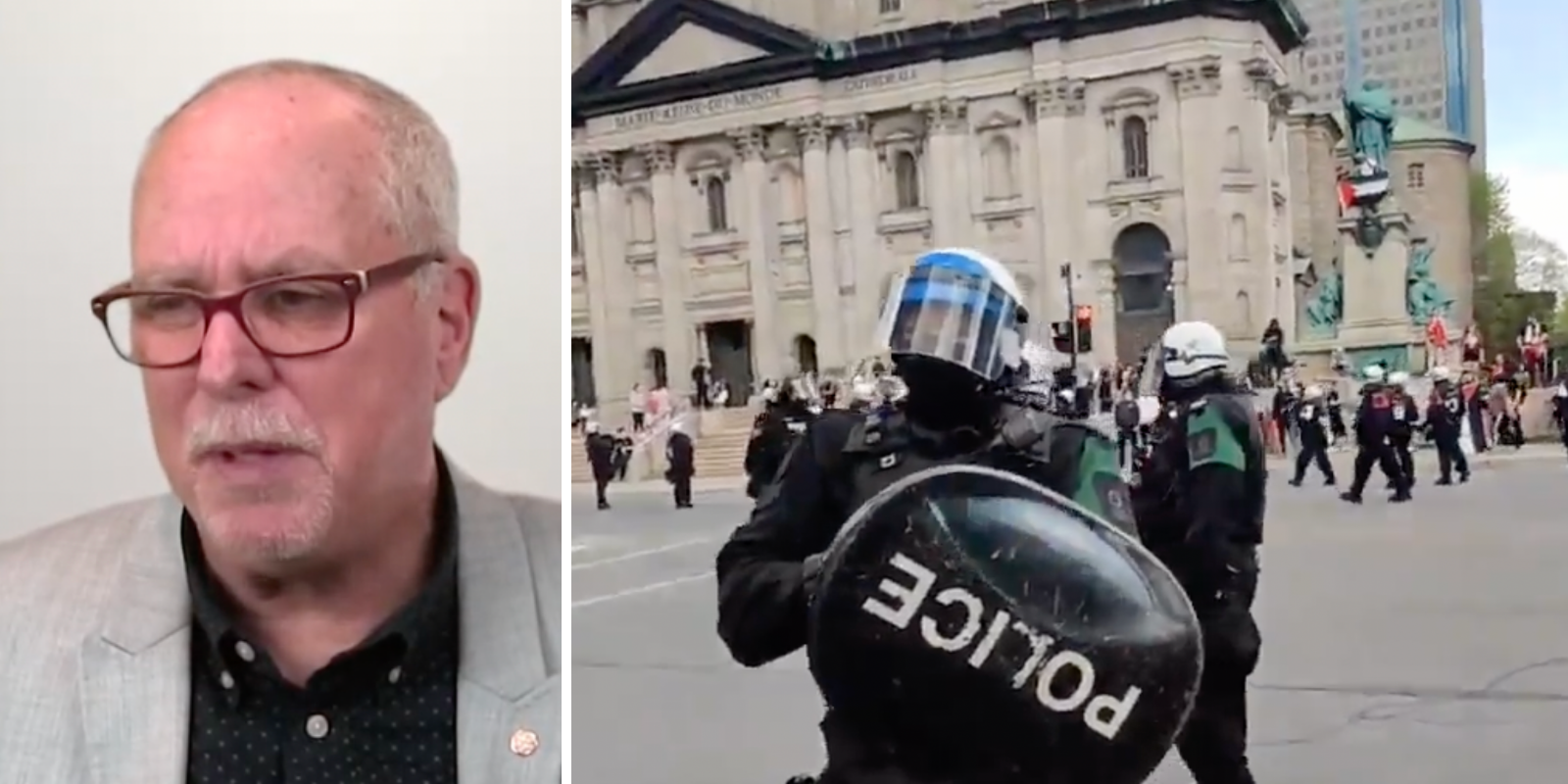 Hamas can't win a military war against Israel, but every time they start one, the virus of antisemitism, for which there is no vaccine, and whose ever-more vicious strains spread farther and faster by the day.

In every major city of North America and Europe, last week's anti-Israel rallies turned ugly in a way we in Canada have not seen before, with rock-throwing, Israel flag burning and outright assaults reported. Combat Antisemitism Movement's weekly report states that antisemitic incidents in the UK have increased by 600 percent. A number of British Jews have been attacked in the streets, and a car caravan flying Palestinian flags drove through neighbourhods with a high density of Jewish residents, chanting, "F*ck Jews, rape their mothers, rape their daughters."

Analyzing 77 media reports of antisemitic incidents, CAM found that 43 of them (56 percent) were motivated by Islamism; 14 incidents (18 percent) came from the far left; 6 were from the far right (8), and 14 (18 percent) were unidentifiable. Numbers like these leave no room for equivocation on the sources of contemporary Jew hatred. European Jews have been exposed for decades to pathological hatred from what is known as the "red-green" alliance of Marxists and Islamists. In Canada, where hate incidents of any kind rarely involve physical assaults, we have been slow to understand that it was just a matter of time before this particularly virulent infection reached our shores.

Ordinary Canadian Jews immediately absorbed the shock and ominous implications of the exponential rise in expressive antisemitism. Every Jew I know is feeling anxiety and fear. But Bernie Farber, chair of the Canadian Anti-hate Network (Antihate.ca), mocked our concerns. Last Tuesday, Farber took to Facebook to scold those "[s]preading sick rumours of violence aimed at Jews" as "fearmongering" and "the worst kind of nonsense." He said advocacy groups for Jews, Palestinians and Muslims "should speak in one voice to condemn it." "It," to be clear, being Jewish fear-mongering.

It is difficult to overstate the offensiveness of such blatant denial from someone in Farber's position. Antihate.ca is in the business of combatting (unspecified) "hate groups." Although the organization has no official standing in the Jewish community, Farber's group is often consulted as though it were an official community entity by media and government people, assumed to be a reliable source for truth on the subject of antisemitism. Antihate.ca receives grants from the government, and has positioned itself as the go-to organization for school boards and other institutions willing to pay for presentations and materials on the hate situation in Canada.

The name is misleading. It is not "hate groups" in general that Antihate.ca concerns itself with. It is hate from one source only—the far right which, as the CAM numbers show, is virtually irrelevant to the escalating crisis of global antisemitism. Antihate.ca does not hide their bias. Farber has admitted to website commenters and on Twitter that "we research all aspects of white supremacy," period, because "[w]hite supremacists pose the biggest threat in [North America]."

Although erroneous, this is an article of faith amongst many aging leftists, for whom the Holocaust is the defining Jewish event of their lives. For them, Nazis—the historical brownshirt, goosestepping kind, flaunting swastikas and speaking German, along with their pathetic brotherhood of modern stooges—became the once, forever and only icon of genocidal antisemitism. They are frozen in time. They can't get their heads around the fact that neo-Nazis of that kind are low-hanging fruit for hate-bashing, because they have no credibility with any decent human being of any mainstream political persuasion. Nor do they hold any institutional power in any democracy.

These Nazi-trackers seem not to—or perhaps have chosen not to, as Farber's post suggests—to grasp the reality  that the head office for genocidal hatred of Jews, whose rhetoric makes Hitler look ambivalent, has shifted from Berlin to Gaza, with branch offices all over the world, staffed by fellow Islamic supremacists and abetted by privileged white progressive BDS allies in academia. These useful idiots believe they are supporting a social-justice movement that is battling "colonialism" and "apartheid" and "racism," but in fact, as has been amply documented and affirmed, including by those best placed to understand systemic antisemitism when they see it, BDS is a movement inspired by and suffused with Judeophobia.

Last week in this space I wrote up the case of a medical resident at Memorial University of Newfoundland who had been mobbed by a coalition of medical students, administrative personnel and third-party commentators. All of them argued that the resident was unfit to practice medicine, largely on the grounds of his alleged Islamophobia, allegations I reject as false and on the "evidence," ludicrously so. The theme of "cultural safety" arose many times in the accusations levelled at the resident.

One of the resident's detractors was Amira Elghawaby, who is a founder and active board member of Antihate.ca. She now works for the Canadian Labour Congress, but from 2012-17, her NCCM tenure ending just before Antihate.ca officially launched in July, 2018, she was the Communications Director of the National Council of Canadian Muslims, an organization considered "controversial" by credible moderate Muslims. (NCCM's present director, Mustafa Farooq, claims Malcolm X as a guiding inspiration.)

Earlier this month, Elghawaby published an article in the Toronto Star, expressing support for the MUN resident's ouster. In her article she stated, "We know that systemic racism is a big problem within medicine in Canada. It is our duty as physicians to make sure that our patients have the best care, the best representation, that any time a doctor walks in, that doctor is bringing the best of the medical tradition with them rather than racism, Islamophobia, white supremacy, these sorts of things."

That article has not aged well in the light of last week's events, particularly since Elghawaby excluded "antisemitism" from her list of hatreds that patients deserve to be free from, even though statistically, antisemitism far outstrips Islamophobia as a hate problem in Canada.

Rather awkwardly for Elghawaby, medical students in Canada are feeling an unprecedented absence of "cultural safety" in the present environment, an absence, one might say, of "the best of the medical tradition." On May 14, Dr. Frank Sommers, co-founder of the grass roots organization DARA (Doctors Against Racism and Anti-Semitism, serving 700 members of the medical, dental, and academic community, on whose honorary board I sit), wrote to his fellow board members:

"It has come to our attention that Jewish medical students and residents feel extremely isolated and scared in the context of the ongoing crisis in the Middle East.

"To address these feelings, [several] medical students/residents organized a Jewish support group. Approximately 15 of us met last night over zoom, ranging from medical students to residents to fellows. Not one person in the meeting currently feels safe on campus. Several students described examples of staff physicians and fellow colleagues in positions of power posting anti-Israel messages, claiming that the conflict is not complicated and calling it 'ethnic cleansing.' While many attendees endorsed feelings of guilt at not standing up against these comments, there was also an underlying fear of repercussions in the form of evaluations, future job opportunities, social isolation, and otherwise. There was also a sense that when these issues have been reported in the past, they have been met with little support and sympathy by the current administration."

On May 16, Dr. Sommers wrote to the board again:

"I hope you are safe and well. The environment in the faculty of medicine has become extremely toxic for Jewish students. Many students are unabashedly fostering anti-Semitism. However, what has been even more disheartening is the physician leaders who have been sharing anti-Israel and anti-Semitic propaganda. There are too many people to count who have engaged in inexcusable behaviour, but two are particularly noteworthy."

I am not going to name the two people or reproduce their antisemitic tweets here. Suffice to say that one of them was a vociferous critic of the MUN medical resident, calling for his cancellation on the grounds of alleged Islamophobia.

What a sobering and disheartening situation our future Jewish physicians find themselves in. Imagine: "Not one person in the meeting currently feels [culturally] safe on campus." Does this not sound like an ideal case for a group that educates the public on, and combats hatred, regardless of the cultural identity of the victim or of the hater? I wonder where one might find such an organization in this proudly inclusive and diversity-loving nation of ours.