Highlights of Métis Week in Alberta

A look at the events that took place in the past week to commemorate the Metis of Alberta. 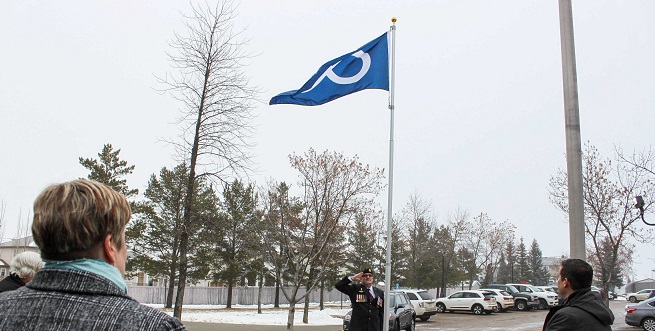 Remembrance Day has just passed, but the gratitude we bestow our veterans’ continues year round. Tales of their untold bravery are passed down in song and legend, and their sacrifices immortalized in the freedoms we cherish today.

As we reach the end of Métis Week in Alberta, we are conscious of the historical struggles faced by our Métis veterans. The pathway to recognition hasn’t been easy.

Nevertheless, here we are. And today, we stand by those–living and since passed–who fought to defend this land we proudly call home.

The raising of Métis flags in cities, towns and hamlets across the province, starting in Beaumont, pays homage to their patriotism and the lessons of their generation. The need to come together, regardless of creed, nationality, or where you come from holds in pursuant of reconciliation.

Raised on Nov. 14, the move honours the Métis for their part in shaping the region’s heritage. While the flag is set to come down Monday, a representative to Beaumont took to social media, stating, “[the flag] is currently on a temporary flag pole. We will be looking for a permanent home for the flag within City Hall.”

And in honour of that permanence, recognizing the contributions of figures like Bertha Clark-Jones, Theo Fleury, and Louis Riel remind us never to take life for granted. And in the case of the latter, the fleeting sense of unity in the face of western alienation.

From the Cree code-talkers to the Métis veterans’ activists, strides were made after decades of hardship. Recognition for their sacrifices became a reality.

The unique role indigenous Canadians filled during the war effort proved indispensable. The Alberta Cree code-talkers, for example, improved Allied communications, where orders could be spoken and translated by a network of Cree code-talkers without fear of enemy intrusion.

While Ottawa recently issued an apology for its past treatment of Métis veterans, their $30-million pledge to recognize their contributions was highly regarded as a step in the right direction.

In the spirit of reconciliation, here is a notable example of those contributions.

Activists and Cree-Métis veteran Bertha Clark-Jones advocated for recognizing the pivotal role the Métis had during the Second World War. She dedicated part of her post-service career to guarantee fair treatment to indigenous and Métis veterans.

Bertha also helped open Nistawoyou, an indigenous friendship centre, which allows men and women living in Canada’s north to find work. She had also worked on the centre’s housing committees and also volunteered at NewStart, which provided educational upgrading programs to the northern communities.

The most profound impact she had was in her co-founding of the Voice of Alberta Native Women’s Society, which was one of the first equal rights organizations for both status and non-status native women. Under Bertha’s presidency, the Native Women’s Society also focused on helping indigenous foster children find foster parents within their communities. An issue overlooked before Bertha’s efforts.

Premier Kenney took to social media on Aboriginal Veterans Day to recognize her achievements as a proud Métis Albertan.

Coming together to defend one’s land, in spite of our differences, provides society with the moral fibre to embrace progress and leave no man, woman or child behind.

And that effectuates the spirit of Riel, who has since been rehabilitated and called a “statesman” by Ottawa’s mayor.

Stanley Cup winner and renowned Métis author Theo Fleury spoke to his on-and-off-the-ice struggles at a recent Edmonton event. Fleury, who is also an Olympic gold medalist, touched on having the balance and the ability to be vulnerable.

“I tried everything to get rid of this pain and suffering. And, I remember having the gun in my mouth. I remember the gun rattling against my teeth, and I remember what it tasted like, as it sat there for quite a long time.”

“At the moment of truth, I had this random thought inside my head: You never quit anything in your life. Why are you quitting now?”

Upon this realization, Fleury threw the gun into the desert, put his New Mexico property up for sale and returned home to Calgary two weeks later.

He attributes spending time with family and fellow Flames’ Alumni to help him get back on his feet.

“I chose to live, but I had no clue how to live life on life’s terms. All I knew was how to cope–happy, mad, sad–and I certainly knew how to make it go away.

Today, he resides in Calgary, as an outspoken advocate of Alberta, calling out the federal Liberals lack of fairness towards the province.

Lest We Forget: the Métis stand tall amidst growing concerns of identity theft

With concerns emerging on indigenous identity theft, attributed mostly to the “Eastern Métis movement,” Canada’s “Aboriginal Identity Population” rose sharply between 2011 and 2016. With the population increasing by 19.5 percent over that span, Indigenous claims to sovereignty and self-determination are under threat by the phenomena of “response mobility.”

In Nova Scotia, experts have indicated that the shift away from one’s “white identity” is commonplace amongst locals. Through “aspirational ascent”, fake claims of indigeneity created over 50 indigenous organizations, provoking genuine concerns from many outside the Métis community.

Being Métis is not something we aspire to be. It is who we are. We embrace our heritage and aspire for greatness. We uplift those around us and seek togetherness over division. But taking another’s identity and assuming it as one’s own appropriates the historical struggles many fought and succumbed too.

Whether intentional or not, author and associate professor of Social Justice and Community Studies at Saint Mary’s University Darryl Leroux made a note of the “raceshifting” trend amongst Nova Scotia’s population.

Per a CBC article, members of this “new Métis [Nation]” have used status cards to receive tax exemptions on cars and gas, sparking outrage and a subsequent probe into the matter.

Having amassed a membership base north of 30,000, Statistics Canada has indicated the number of self-identifying Métis in Nova Scotia rose 125 per cent in the decade preceding 2016.

Cheryl Maloney, a Mi’kmaw activist and Cape Breton University political science professor, states, “They’re trying to be viewed as Métis under the Constitution, and to have rights and benefits [as Métis people].” Rejecting their identity is not ‘exclusive’ or ‘mean-spirited,’ it is merely the just thing to do, especially for those no longer with us to speak against the whitewashing of Métis culture.