Hinshaw admits Alberta Health mistook the death of 14-year-old Nathanael Spitzer for COVID and said the province is committed to verifying all the facts for suspected COVID deaths under 18 moving forward. 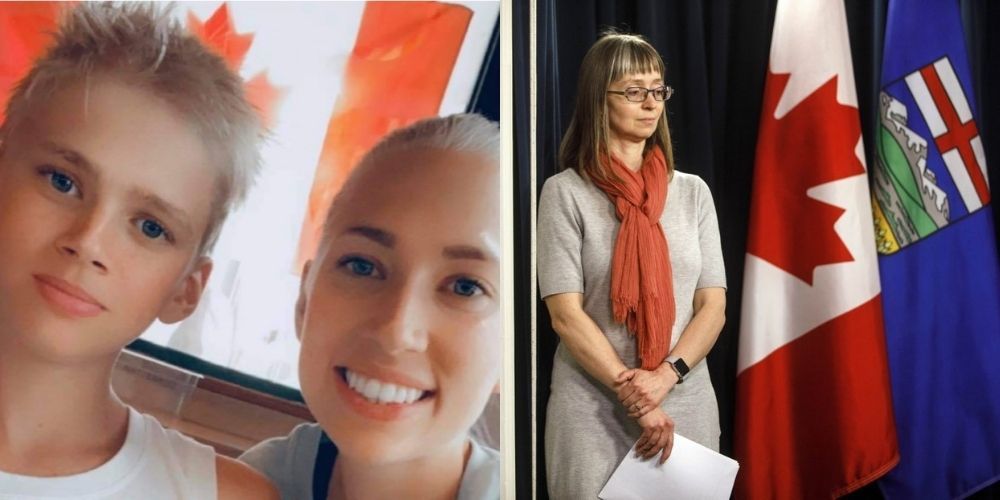 Alberta's top doctor Deena Hinshaw admits Alberta Health mistook the death of 14-year-old Nathanael Spitzer for COVID and said the province is committed to verifying all the facts for suspected COVID deaths under 18 moving forward. After Thursday's announcement, Alberta has yet to declare a COVID-related death among children officially.

On Wednesday, Hinshaw clarified that while the initial report of the child's death included COVID as a "secondary cause," new information indicated that COVID was not the cause of death. She apologized directly to the Spitzer family, reported the National Post. "The pain of losing a child is terrible enough without having that loss compounded by a public debate about the circumstances," said Hinshaw. "I'm sorry if the way I spoke about that death made your grief worse."

Hinshaw said the province removes deaths from reporting should a review prove COVID is not the cause of death. But, should COVID later be the cause, those deaths are added to the reporting. She explained that COVID deaths are classified as such if COVID is a primary or secondary cause and in cases where there was a diagnosis and even if the final cause remains under investigation.

"We have chosen to focus on being as timely as possible in the interest of transparency," said Hinshaw. Alberta will now review all deaths of those under 18 before releasing this information. "It is clear that we need a different process for young people," she added.

When Hinshaw acknowledged the passing of a 14-year-old, who, at the time, was among those 33 new COVID deaths reported over the Thanksgiving long weekend, she also admitted the teen "had complex pre-existing medical conditions that played a significant role in their death." Though she provided no further details concerning the teen's passing on Tuesday, had his passing been COVID-related, it would have made him the youngest Albertan to die from COVID.

But Nathanael's sister, Simone Spitzer, called out Alberta Health Tuesday for mislabelling her younger brother's death as COVID-related. "The 14-year-old … is my brother. He died from stage 4 brain cancer, not from Covid," she said. "He was diagnosed in January 2021 and hospitalized in August. Two days before his death, he was tested for Covid, [which] turned out positive… please share and comment that this is fake."

Devastated by their loss, the Spitzer family vented their frustrations with Alberta Health adding Nathanael's passing to the COVID death tally. Justine Spitzer, his other sister, called it "fake news." However, Hinshaw's clinical delivery led to immediate condemnation on social media Tuesday, with critics accusing the province's top doctor of dehumanizing Nathanael by mentioning his pre-existing conditions.

NDP leader Rachel Notley undermined the role "pre-existing conditions" contributed to Nathanael's passing and solely to COVID. She then pivoted to criticize Alberta's government and Alberta Health. "A child has died of COVID-19. They were just 14," she tweeted. "Telling their loved ones that there were other health complications that contributed to their death offers no comfort whatsoever."

"No matter what 'pre-existing conditions' they had, this child died during a fourth wave that was preventable. This shouldn't have happened. We need to know what will be done to stop it from happening again."

Thomas Dang, the NDP MLA for Edmonton South, followed, tweeting: "For the 12% of us in Alberta who have asthma, downplaying the death of a 14-year-old for comorbidities is the opposite of comforting. This is a life-snuffed short. It's a tragedy and a disaster." A Twitter user replied: "He had stage 4 brain cancer, [and] was in hospital and palliative. [He] tested positive two days before cancer took him." The user recommended Dang delete his tweet.

Shannon Phillips, the NDP MLA for Lethbridge West, tweeted her frustrations with the province's COVID response, adding: "If you're a 14-year-old with a disability or a health condition, I want you to know you matter to me. I want you to know your life should be as full of potential and optimism as anyone else's."

Janis Irwin, NDP MLA for Edmonton-Highlands-Norwood, also tweeted: "I don't care what other medical conditions this child had. They are gone. We need to all fight for better. This cannot happen again." Others claimed that pointing out Nathanael's brain cancer was done to "comfort anti-vaxxers" and "is the language of FB anti-vaxxers."

A Twitter user said, "Announcing the tragic death of this child as a COVID death without mentioning the other health conditions would be incomplete. People are entitled to the truth." In December 2020, Hinshaw said the purpose of comorbidity reporting is to "provide additional information to Albertans" and help them evaluate the risk of COVID.

Alberta reported comorbidities for COVID-related deaths as a better way to explain the risks and to show certain health conditions heightened the risk of severe illness or death from COVID. Notably, 83 percent of those who died from COVID in Alberta also had hypertension, but critics claimed such information downplayed the deaths.

Hinshaw added: "To those who believe that the numbers are not accurate, I would say that the process that we follow takes very seriously the responsibility of ensuring the deaths we report do have COVID as either a primary or secondary cause."

"I want to be clear … the presence of any chronic condition is not a death sentence, and should not be, so whether or not an individual who passed away had a chronic condition or not, does not mean that that death was less tragic," she said.