35 Republicans joined all the House Democrats in voting in favor of it. It will now be sent to the Senate for their vote. 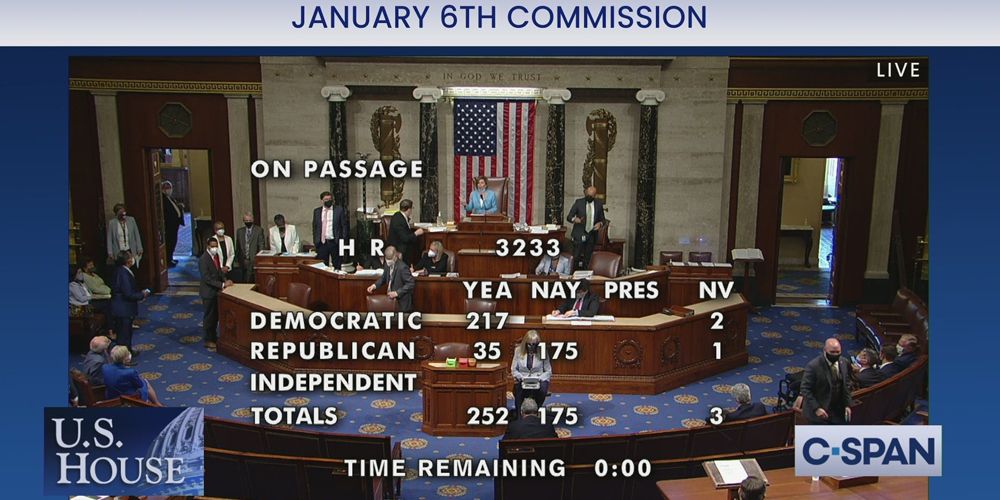 Despite Politico's fake news surrounding a Capitol Police letter being passed off as if it was the organization's official stance on legislation, the House of Representatives voted in favor of a Jan. 6 commission this evening.

What did they vote on, exactly? According to Lawfare it's described as "a bipartisan deal from the House Homeland Security Committee to create a 9/11-style commission to investigate and report on the Jan. 6 insurrection."

It was originally an idea floated by Hillary Clinton to Rep. Nancy Pelosi on a podcast that took place on former President Donald Trump's last full day in the Oval Office. California Democrat Rep. Eric Swalwell (famous for being honeypotted by a Chinese spy) picked up the idea again weeks later.

All House Democrats voted in favor of the Jan. 6 commission bill. Ed O'Keefe of CBS News compiled a list of the 35 Republican representatives who joined them.

Politicians like Maryland Rep. Jamie Raskin applauded the bill's passage. Ironic given how Raskin was a central figure in Trump's impeachment proceedings for Jan. 6th, and in the end he failed to win the votes of his colleagues.

The Jan. 6 commission bill's roots were the fallback option for Democrats losing their second impeachment trial against Trump.

In voicing opposition there were arguments brought forward by Representatives like Marjorie Taylor Greene. Her rebuttal against the commission bill was that the Biden administration would use the shroud of this long-term investigation as an excuse to harass Trump supporters. Backing that statement up, Greene pointed to the fact people charged for crimes related to Jan. 6 are being held in solitary confinement while the Marxists of Black Lives Matter and Antifa roam free.

"Republicans in the House and Senate should not approve the Democrat trap of the January 6 Commission. It is just more partisan unfairness and unless the murders, riots, and fire bombings in Portland, Minneapolis, Seattle, Chicago, and New York are also going to be studied, this discussion should be ended immediately."