"BLM and Antifa established an autonomous zone in Seattle," Greene said, "and attempted to burn government buildings in Portland, is that not an insurrection?" 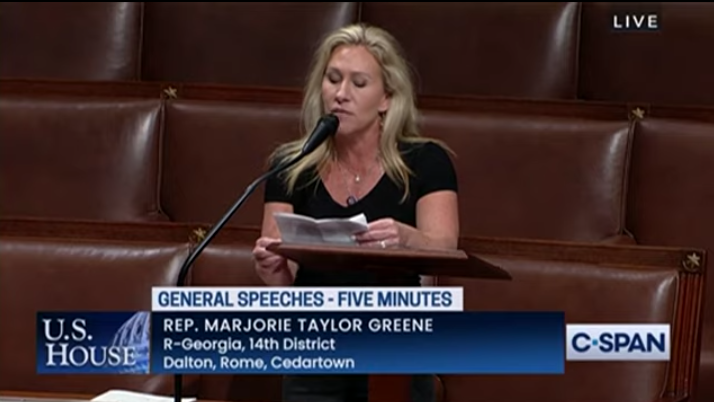 Rep. Majorie Taylor Greene (R-GA) took to the House floor on Tuesday to speak against the recently authorized Jan. 6 Commission, which is a group being put together by Senate Majority Leader Chuck Schumer and House Speaker Nancy Pelosi to get to the bottom of just what went on that fateful afternoon in January.

"I rise in opposition to the Commission to study the events of January 6, as well as spending $2 billion in security supplemental," Greene began.

"The question that comes to mind is this: What about all the riots that happened during the summer of 2020 after the death of George Floyd? What about all the damage caused to federal buildings, churches, people's businesses, and innocent people that were killed, like David Dorn?"

Greene detailed the damage done to cities across the US. In Minneapolis, "700 buildings were damaged, burned, or destroyed," she said, including hundreds of local businesses. This resulted in "$55 million in damages in Minneapolis alone."

"BLM and Antifa established an autonomous zone in Seattle," Greene said, "and attempted to burn government buildings in Portland, is that not an insurrection?"

Greene listed damages in New York and Philadelphia, along with the hefty monetary cost to those cities. "Protests in Kansas City resulted in $2.1 million in damages, mostly over the course of one weekend. Several officers were injured as well," she noted. "Protests cost the police department about $1.5 million in overtime."

And these were not the only cities for which she brought receipts of damages. Protests in Salt Lake City wracked up $100,000 in damages, while Denver was well $5.5 million. "BLM protests in Nashville set a federal courthouse on fire," she said, "the destruction is estimated to have cost $1.2 million in damages. Again, is that an insurrection?"

She brought up Portland, Ore., which saw over 100 nights of rioting, where rioters attempted to "burn down government buildings," which including damages to the courthouse as well. This was the courthouse that President Trump was derided for trying to protect with the help of federal agents.

A state of emergency order was declared in Louisville, where two police officers were shot. Kenosha, Wisconsin, saw police officers injured as well, and two city trucks were set on fire there by rioters. Kenosha is the city that made the phrase "fiery by mostly peaceful" famous.

Guilford County, North Carolina, was not without incident either, where the courthouse was broken into then set aflame, with a cost of $200,000 in damages. A courthouse in Oakland shared a similar face.

"Studies show 570 protests in 220 US locations turned violent over the summer. Are those not insurrections?" Riot damage from the summer of 2020 caused the most damage in US insurance history. "It resulted in up to $2 billion of damages in 20 cities across the US, mostly concentrated in LA, Detroit, Miami, DC and New York."

"Indeed," she said, "we should have a commission to study the violent Antifa and BLM mobs that have plagued American cities this past summer. And that's for the American people, who by the way, pay the taxes that fund everything we do here."

Greene told the House that "we should back the blue, because they certainly back us."

"Also," she said, "while it's catch-and-release for Antifa and BLM, the people who breached the Capitol on January 6 are being abused." She spoke of the poor conditions in which they are housed, including 23 hours in solitary confinement, while District Attorneys from Portland to New York have declined to prosecute protestors and rioters who caused the maddening damage over the summer and into the fall.

She wanted to know who placed the pipe bombs outside the DNC and RNC headquarters on the night of Jan. 5, why President Trump's request for 10,000 National Guard troops for the event he held at the ellipse on Jan. 6 was denied, who denied it, and why?

House Minority Leader Kevin McCarthy has also opposed the Commission. "Given the political misdirections that have marred this process, given the now duplicative and potentially counterproductive nature of this effort, and given the Speaker's shortsighted scope that does not examine interrelated forms of political violence in America, I cannot support this legislation," McCarthy said.