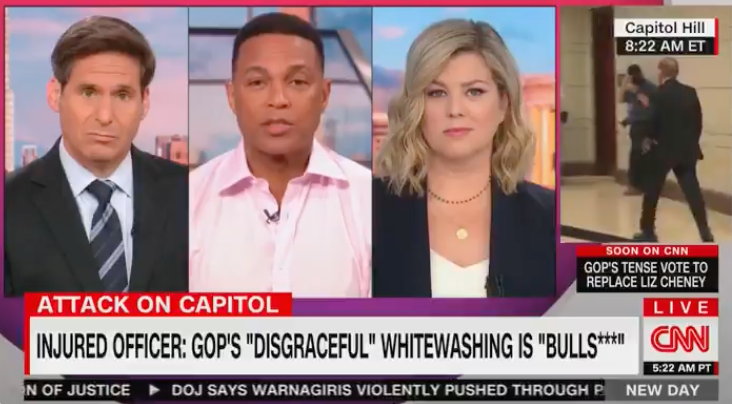 "And to have people deny that is just disgusting. And the only reason they're doing that, I believe is because one, they're embarrassed, two because they don't want it marked down in history, they don't want it recorded, because of their—they're complicit.

"They're complicit. Because the lies that they told, and the way they were able to be coopted by the former president, to them, I'm sure it's embarrassing, and it's some form of, they're trying to reconcile it in their minds. Cognitive dissonance. But something, y'know, I'm not a psychologist, but something is off," Lemon said.

This comes as a bipartisan commission has been formed to investigate the one day, one afternoon, Capitol riot of Jan. 6, in which Trump supporters broke off from a rally at the ellipse and broke into the Capitol, disrupting Congress until they quelled by law enforcement.

The rioters were unarmed, no weapons charges have been filed, and only two individuals out of over 400 who were arrested were charged with a serious crime, that of assault. Yet for Congress, the incident is still incredibly dire.

The 9/11 style commission, which was called for by House Speaker Nancy Pelosi, to delve into the "facts and circumstances" of the Jan. 6 riot will be led by the House Homeland Security Committee. House GOP wanted to include an investigation into the summer violence perpetrated by far-leftist groups as well. Other Democrats insisted on the commission as well.

In the formation of the commission, it was announced that "The commission will be charged with studying the facts and circumstances of the Jan. 6 attack on the Capitol as well as the influencing factors that may have provoked the attack on our democracy."

"Commissioners must have significant expertise in the areas of law enforcement, civil rights, civil liberties, privacy, intelligence and cybersecurity. Current government officers or employees are prohibited from appointment."

The Committee announced that the commission will be bipartisan, with 10 lawmakers assigned to it. The chair of the committee and half the participants will be selected by House Speaker Nancy Pelosi in coordination with Senate Majority Leader Chuck Schumer. House Minority Leader Kevin McCarthy and Senate Minority Leader Mitch McConnell will select the other five members.

This commission will be able to issue subpoenas, and their report will be due Dec. 31, 2021.