A video from Portland, OR posted on Twitter Thursday showed armed Antifa activists assaulting a driver after threatening him with firearms in broad daylight while blocking traffic. 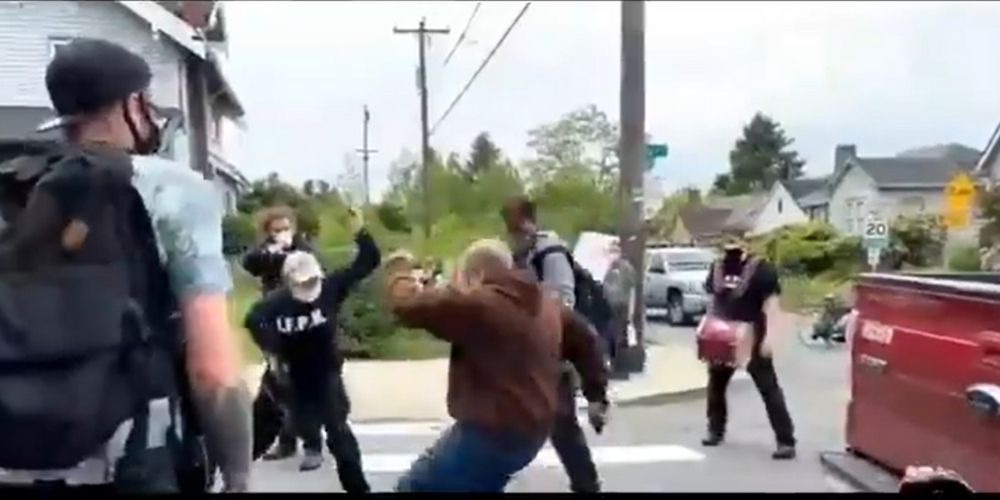 A video surfaced from Portland, Oregon, on Thursday showing armed Antifa militants assaulting a driver and threatening him with firearms in broad daylight while blocking traffic.

According to the Portland Police Bureau, On May 5 at approximately 12:12 PM, police were dispatched the report of a pedestrian struck by a car near North Interstate Avenue and North Killingsworth Street during an activist demonstration.

When officers arrived they did not find any pedestrians who claimed to have been struck. The march had continued on while openly carrying firearms. Additional calls came in from people who had been driving vehicles in the area and who were blocked by the anarchist march. One person told police that activists broke out their vehicle windows, damaged tires, and sprayed them with some kind of irritant near North Interstate Avenue and North Killingsworth Street.

A person in another vehicle blocked by the crowd near North Alberta Street and North Michigan Avenue got into a dispute with people who surrounded him and took a firearm from him, as well as tools and keys. One person was transported by ambulance to the hospital following one of the altercations.

The 28-second video, showed an armed anarchist group carrying firearms, yelling at the driver of a red truck "Put your f---ing gun down!"

The video splices to a later moment and showed the driver in the street, confronting the group, and being tackled after he pulls an object which appears to be a weapon and points it at the militants.

"Get the weapon!" "Get him on the ground!" voices are heard shouting as the driver is tackled to the ground.

A Twitter post by We Out Here Magazine said the activists were part of a weekly march in memory of Patrick Kimmons, a black man fatally shot by Portland police in 2018.

Police asked the public to send them information via email to crimetips@portlandoregon.gov or by using the Crime Stoppers website at www.crimestoppersoforegon.com. Police are offering rewards of up to $2,500 for information.

BREAKING: Nick Gravante called Trump in the middle of the dinner