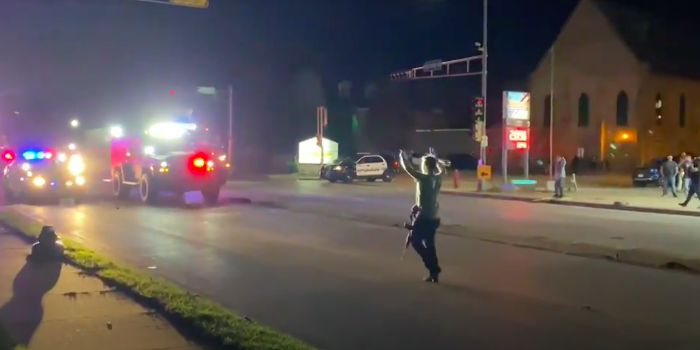 A team of investigative journalists, videographers and writers from the New York Times has tracked the movements of the shooter Kyle Rittenhouse during Tuesday night's riot in Kenosha, Wisconsin.

Rittenhouse, a 17-year-old native of Illinois, has been taken into custody for the shooting of three individuals during the riot. Two of the victims have been pronounced dead.

Rittenhouse appeared on multiple videos and photos taken throughout the night.

The teenager, armed with a semi-automatic rifle and carrying a med-kit, was seen early in the night and captured on film by Kristan T Harris, the producer and co-owner of “The Rundown Live”, an online news stream.

Rittenhouse was then interviewed by Richie McGinniss, a video editor at Daily Caller. While standing in front of a burnt down, boarded up business, Rittenhouse told Richie that his job was “to protect this business” and “help people if there’s someone hurt.”

Later, Rittenhouse defended parked cars being smashed by rioters. He was told to leave the area by police, and was then chased into a parking lot several blocks away when an unknown gunman fired a shot into the air.

As a man lunges towards him, Rittenhouse fires four shots, one hitting the man in the head. One video shows what looks to be a Molotov Cocktail being lobbed at Rittenhouse. Rittenhouse allegedly phoned the police after this.

Rittenhouse is then chased down the street by a group of three men, one rioter yells "that's the shooter." He falls down and points his rifle and fires at the men. Rittenhouse fired four shots. One man, carrying a skateboard, appeared to be hit in the chest and fell to the ground. Another, who is carrying a handgun, was hit in the arm and ran away.

The man who was shot in the arm appeared in a photo today, Gaige Grosskreutz's arm appears to have been saved by doctors. His friend commented on a picture saying Gaige's regret is that he didn't kill Rittenhouse.

After the shooting, Rittenhouse walks towards the police vehicles where he makes a hand symbol (the symbol was perhaps told to him during his earlier phone call after the first shooting) and is let through their blockade as they go and tend to the injured.

Many in the establishment media have suggested the incidents may have been race-related but the Anti-Defamation League (ADL), which tracks extremist activity, told CBS News that they found "no indication from Rittenhouse's social media footprint that he is connected to any extremist movements."