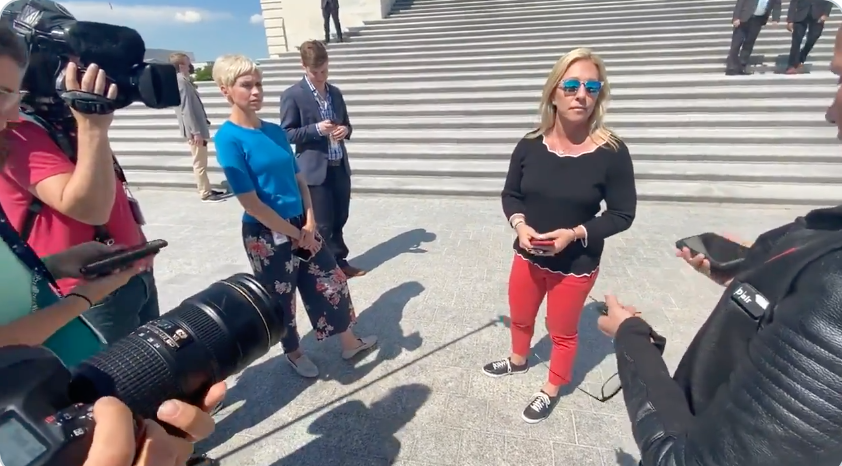 Marjorie Taylor Greene released the full footage of scrum she participated in involving MSNBC, or as she calls it, MSDNC, so that when the network inevitably chops it up, she will have receipts of her full remarks.

The video shows Rep. Greene (R-GA) speaking to reporters in front of the Capitol Building in Washington. A reporter asks "Can you tell me about why you think it is so important to ask Rep. Alexandria Ocasio-Cortez for a debate, and she says she feels threatened by it?"

"She feels threatened to be able to discuss the policy of the Green New Deal, is that what she's saying?" Greene asks.

"No, the manner in which you—" the reporter says, indicating that AOC takes issue with Greene personally.

"Since I have been a member of Congress I have been kicked off of my committees by the Democrats when there were no ethics violations against me—not one—I did nothing wrong," Greene said.

She recounted an incident in which Rep. Cori Bush (D-MO) walked by Greene screaming at her "to put on a mask." Greene spoke about another incident where the delegate from the US territory of Guam marched the National Guard to her Congressional office.

"I had over 30 National Guard marched on my office by the delegate of Guam. Thank God I wasn't in there," Greene said. Greene said that Rep. Marie Newman "shoulder-checked" her on Thursday inside the Capitol Building and refused to acknowledge her. Rep. Eric Swalwell, she said, took issue with one of her staffers, "getting in his face, cursing at him," for pointing out that he doesn't have to wear a mask anymore per guidance from the president and the CDC.

"The Democrats are the party of aggression and violence," she said, pointing out Reps. Ilhan Omar and Rashida Tlaib's support for Hamas terrorists over US ally Israel. "They're supporting the terrorists," she said, as well as supporting Antifa militants and BLM rioters.

"And then I get harassed by the press every single day," Greene said, "about January 6, and I've said the entire time, literally, starting on that day, during the riot, how much I'm upset by it, how much I'm against, and how appalled I am by it. I was a victim of it as well.

The American people, she said,  want to know what's in the Green New Deal, and she feels that it's proponents should be able to get out there and explain it, debate it, and be held accountable for its plans.

The reporter countered that they do "speak to Democrats all the time," before asking Greene "Do you think, today, that these constant confrontations with members of Congress, which we really haven't seen in Congress in a very long time, does anything need to change?"

"No, you know what we haven't seen in a long time? We haven't seen a member of Congress," she replied, referring to herself, "willing to hold people accountable for the actions they're committing. You see Democrats constantly getting away with things."

Greene suggested that the reporters ask House Speaker Nancy Pelosi why she denied National Guard troops to be on hand for Jan. 6. Green said there's nothing wrong with her asking questions and pushing for debate, that this is her job as a congresswoman.

Another reporter asks "You've had one conversation with Ocasio-Cortez on the floor... what did that entail?" Greene said that was when she was asking AOC for a debate on the Green New Deal, and when she asked AOC for accountability for what her socialist policies would do to business owners in America.

The reporter insisted on trying to get Greene to say that the election was stolen, but Greene didn't take the bait, instead saying that there's nothing wrong with "taking a look and satisfying the people who want to know."