The Conservative Party was looking for someone to fill in the shoes of Stephen Harper, who had just lost in a federal election to some guy from Quebec with nice hair. Can’t remember his name, which is weird because it was all that he campaigned on, but he seemed really nice. 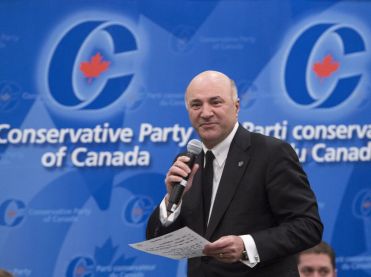 Last night I had the strangest dream I have ever dreamed before! I dreamed that Kevin O’Leary ran for the Conservative Party Leadership… Thank God it wasn’t real, because that surely would have been a nightmare!

The dream took place in a time not too different than ours; in 2017, I believe. The Conservative Party was looking for someone to fill in the shoes of Stephen Harper, who had just lost in a federal election to some guy from Quebec with nice hair. I can’t remember his name, which is weird because it was all that he campaigned on, but he seemed really nice.

Anyway, this dream was weird for a number of reasons. I think this whole dream was all inspired because of all of the real world media coverage that Donald Trump was getting at the time. The United States was fresh off of one of the most frenzied and divisive presidential campaigns ever.

Donald Trump, an entrepreneur, media mogul billionaire, had just defeated lifelong politician Hillary Clinton in a presidential election that will surely be cemented in history as one of the most memorable.

With all of that happening in the real world, my subconscious must have had a really fun idea that it manifested in a dream; What if Canada had a billionaire-type figure run for political office? Hah, that’s a wacky idea.

Kevin O’Leary, the self titled “Mister Wonderful,” and probably the closest thing Canada could parallel to a Trump figure. O’Leary is himself worth plenty of pretty pennies, and has a long IMDb resume, including a last place finish on Celebrity Jeopardy!, and most notably his time spent on Dragons Den and Shark Tank, two TV shows that are based around billionaire figures making investments in startups and businesses from Canada and the United States, respectively.

If Trump was able to do it, perhaps he did it with a winning formula. O’Leary is a brash, unapologetic, balding media figure. Trump had Trump Steaks, Kevin had O’Leary’s Fine Wines. Trump had his book The Art of the Deal (one of the finest books I’ve read in my time, I must say), O’Leary had Cold Hard Truth: On Business, Money & Life. (Not as good)

O’Leary had already laid the groundwork down for him to enter into politics. O’Leary had already offered to invest $1 million in the economy of Alberta in exchange for the resignation of Premier Rachel Notley in 2016, a troll move that I’m sure he knew would give him some free air time.

He then appeared with four other prospective leadership candidates at a conference for federal Conservatives in late February 2016 where he gave a presentation titled “If I Run, This is How.” Hint hint!

So there I dramt (the past tense of dream), I dramt all night these hilarious thoughts of what an O’Leary candidacy for the Conservative Party would look like.

Well for one, O’Leary spoke no French. But fear not! He’s already bilingual. In this horrible, unimaginable nightmare I had, O’Leary stated that he was bilingual; in English and Jobs. A slick, bulletproof response, that was sure to appease the 8 million+ native French speakers in Canada. Maxime Bernier, who now runs the People’s Party of Canada, said that O’Leary was a tourist who would never be Prime Minister without learning French.

So then, Mr. O’Leary stated that he was taking French lessons, and promised Canada that he would learn French in time for the federal election. O’Leary, a then-62-year-old man who surely had plenty on his plate if he was to run a serious campaign to be leader of the Conservatives, promised to find time from his busy schedule to learn an incredibly nuanced and complicated language.

He wanted to be taken seriously! This wasn’t just some stunt by an egotistical maniac who loves the spotlight (Yes, it is), this was a real political move by a serious political candidate!

He ran on a campaign of basically nothing, insisting that he was a serious candidate that could create serious change within the conservative party.

Thankfully, the wool was not pulled over the eyes of most Canadians, as O’Leary’s campaign hopes were intense yet short lived. Although O’Leary did do quite well in the polls, he dropped out ultimately because he didn’t know any French and his vast unpopularity in Quebec. He then left the party without paying them back $500,000 and endorsed Maxime Bernier, who ultimately lost to now CPC leader Andrew Scheer.

It didn’t help that on the same day that he announced his candidacy, his former Dragon’s Den co-star Arlene Dickinson stated that O’Leary was “self-interested” and “opportunistic,” directly questioning his qualifications for the office of Prime Minister of which he was hoping to achieve.

Anyhow, thank God that was all just some horrible fever dream that would never, ever happen in real life, and thank goodness that w-
Wait, what the hell? That all actually happened? Kevin O’Leary, I’m offering you $20 for a 100% stake in my business idea, in which you never, ever do that again.