On June 26th, an Illinois park will be hosting a "family-friendly party in the park celebrating LGBTQ Pride" which will feature drag performances for children. 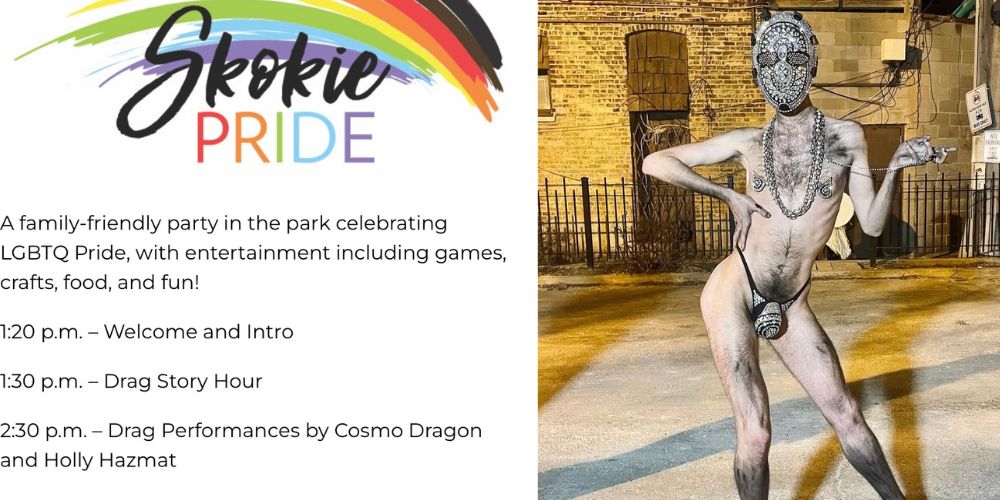 On June 26th, an Illinois park will be hosting a "family-friendly party in the park celebrating LGBTQ Pride" which will feature drag performances for children. The event will be hosted by the Skokie Parks District in Skokie, Illinois.

Libs of Tik Tok took to Twitter to post about the event and wrote, "Illinois Park is having a “family-friendly” pride event featuring a drag performance by this drag queen. @SkokieParks receives millions in funding."

The drag queen Libs of Tik Tok referenced is "Holly Hazmat" who can be seen in the photo striking an arms akimbo pose while nearly naked. According to the Skokie Parks website, Holly Hazmat goes on stage for kids at 2:30pm along with drag performer "Cosmo Dragon." The event will also host a Drag Queen Story Hour for children.

Drag Queen Story Hour has been mired in controversy as their popularity has grown. In 2019, reports emerged of a convicted child sexual predator reading at these story hours. Various allegations of sexually inappropriate behavior, including flashing, have followed a number of these events, raising alarm for concerned parents nationwide.

The Chicago Tribune reports that the Skokie Park will be "hosting what may be the town’s first-ever public LGBTQ pride event" and the man at the heart of the planning is Jon Marquardt, assistant superintendent of recreation.

Marquardt has received accolades in the past for his progressive park stance. In 2021 he received the first ever "Champions for Change award" from the Illinois Park and Recreation Association. He was reported as "wearing a broad smile" after he received the award and said, "It’s amazing. It shows we really are dedicated to diversity, equity and inclusion in Skokie.”

By invoking the ideology of "diversity, equity, and inclusion," Marquardt seems to affirm that Skokie Pride is part of a larger progressive platform. However, many of the drag queen events like the one being held by Skokie Park under the guise of progressivism have exposed children to hyper-sexualized environments which have been equated to child grooming.

As Libs of Tik Tok pointed out, and like many other areas in America, much of the funding for Skokie Park's drag show for kids comes from taxpayers.