A U.S. carrier group steamed toward the Persian Gulf this week in show of force against Iran, as exiles of the Islamic republic joined parliamentarians in Ottawa to demand that Canada take more punitive measures against the rogue regime. 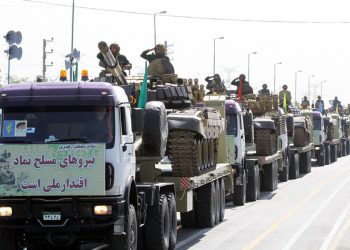 A U.S. carrier group steamed toward the Persian Gulf this week in a show of force against Iran, as exiles of the Islamic republic joined parliamentarians in Ottawa to demand that Canada take more punitive measures against the rogue regime.

Led by former attorney general Irwin Cotler, the coalition of dissidents and MPs called upon the federal government to apply Magnitsky Act sanctions to 19 high-ranking officials in Iran.  On top of freezing assets and holdings of these “architects of the oppression,” Cotler’s group also wants Canada to officially list the Iranian Revolutionary Guard Corps as terrorists.

“For 40 years the government of Iran wrote their ideology on the backs of the women,” exiled journalist Masih Alinejad told MPs during a committee briefing on her country’s egregious human rights record.

“All the power rests with the supreme leader of the Islamic state…who is selected for life by a number of high-ranking clergy, like they select the Pope at the Vatican,” explained Ebadi, a Nobel laureate. “Under the regime there is censorship and no freedom of expression…people joke, ‘I have freedom in Iran, the freedom to go to Heaven.'”

The story of Iran’s blight on the geopolitical landscape begins during the Islamic revolution in 1979, which culminated with the seizure of the U.S. embassy in Tehran where 52 diplomats and citizens were held hostage for 444 days.

As protests intensified in February of 2018, the regime responded by arresting 29 women for removing their hijabs in public. Amidst this political unrest was the death of dual Canadian/Iranian citizen Dr. Kavous Seyed-Emami while in custody of Iranian authorities.

Seyed-Emami, the founder of the Persian Wildlife Heritage Foundation and University of Lethbridge lecturer, had been accused of spying for America and Israel. To this day his widow Maryam Mombeini, also a Canadian citizen, remains under house arrest in Iran.

These events spurred an Opposition Conservative motion last June to list the Iranian Revolutionary Guard Corps (IRGC) as a terror group. While the Liberal government voted in favour, nearly a year later it has yet to follow through.

“As Minister (Chrystia) Freeland has said, including directly to Iran, until Maryam Mombeini is allowed to return home, her freedom will be the only topic of discussion we have with the Iranian government,” Freeland’s press secretary Adam Austen told The Post Millennial.

“We oppose Iran’s support for terrorist organizations, its threats toward Israel, its ballistic missile program, and its support for the murderous Assad regime.”

As for listing Iran’s entire armed forces as a terror group, the Foreign Affairs minister and Public Safety minister Ralph Goodale remain coy. In an email to TPM, Goodale’s spokesperson Scott Bardsley repeated what the minister has already told the House of Commons.

“The assessments for new terrorist entity listings are an on-going process,” wrote Bardsley. “New entities are added once it has been determined that they meet the legal threshold.”

Neither minister offered any comment about imposing Magnitsky Act sanctions against high-level Iranian officials, or whether the government was considering such a move.

Official diplomatic ties between Canada and Iran have been severed since 2012, when then Prime Minister Stephen Harper listed the regime as a state sponsor of terror, closed the Canadian embassy in Tehran, and tossed their diplomats from Ottawa.

Ferry de Kerckhove, twice-director general at Foreign Affairs and former Canadian diplomat with extensive experience in the Muslim world, said in the absence of official diplomatic ties there Canada can do little to force Iran’s hand on Mombeini and other Canadians held by the regime.

“The leverage we have is extremely minimal and the atmosphere that has been brought about by Trump’s renunciation of the JCPOA (Iran nuclear deal) makes the atmosphere even more difficult,” de Kerckhove said in an interview.

“The only countries that still have relations with Iran are the Europeans, but again there is very little leverage that the Europeans would be prepared to extend to help Canadians given that they themselves have serious issues of human rights with Iran, including their own citizens being in jail and similar situations so it’s very difficult to proffer anything positive.”

A year ago, the U.S. withdrew its support the Joint Comprehensive Plan of Action aimed at preventing Iran from developing nuclear weapons—what U.S. President Donald Trump called “the worst deal ever”.

The U.S. continued its pressure on Iran in April by sanctioning its crude oil customers, for which the regime threatened to close the Strait of Hormuz, the entrance to the Persian Gulf and friendlier ports of Kuwait, Bahrain, and Dubai. The sanctions followed Trump’s designation of the IRGC as a terror group.

“Whatever you think we could be doing on Iran, we would gain very little by doing what Trump is doing because we have no means to counter what Iran could do to us, whereas the U.S. has the power and means to oppose Iran,” warned de Kerckhove of Canada following the U.S. president’s lead on IRGC.

Canada already designates IRGC’s clandestine al-Quds wing as a terror group for funding and training the Taliban, Lebanese Hezbollah, and Hamas (who are also listed), and other tentacles of Iran’s terror exports; Palestinian Islamic Jihad and the Kurdistan Workers Party.

Adding to our government’s diplomatic woes with Iran, and by extension the United States, is Conservative leader Andrew Scheer’s recent speech to the Montreal Council on Foreign Relations.

In Montreal last week, Scheer offered shades of his party’s foreign policy that includes moving the Canadian embassy in Israel to Jerusalem, as Trump did with the U.S. embassy in December of 2017.

“So what can we give to Trump that Scheer has not just promised with the Jerusalem embassy? In this sense (the government) is in a weak position,” said de Kerckhove. “On Iran, Trudeau is actually in the same camp as Trump but we are very discreet – we still think that the JCPOA was the right treaty, but right now we’re pretty coy and we don’t talk much about it.”

While Iran vowed to stick to the nuclear deal along with Europe, China and Russia, despite the U.S. withdrawal, recent developments now endanger the treaty as Tehran has threatened to resume stockpiling enriched uranium prohibited by the JCPOA.

In addition to dispatching the USS Abraham Lincoln Carrier group to the gulf, Trump ordered four strategic B-52 bombers deployed to the U.S. airbase in Qatar. The administration claims this enhanced military presence in the region is to protect American interests and allies against possible attacks ordered by Tehran.

As prospects of a military confrontation between the U.S. and Iran increase, the chances for Mombeini’s release in the near-term diminish. Cotler’s coalition of activists and MPs have also lobbied on behalf of Saeed Malekpour, a permanent resident of Canada who has been in an Iranian prison for 10 years after being arrested for designing pornographic websites.

Other human rights abuses perpetrated by Iran against Canadians include Homa Hoodfar, a Concordia University professor imprisoned in Tehran for four months in 2016 for the crime of dabbling in feminism.

In 2003, Iranian-Canadian photojournalist Zahra Kazemi was tortured and killed after she was arrested for taking photographs outside of Iran’s notorious Evin Prison.