The City by the Lake is OK-sign sensitive. That appears to be true. So when a Chicago high school noticed that their yearbooks were riddled with teens making the OK gesture, the only solution was to replace every single yearbook, no matter the cost. That cost ended up being $53,000. 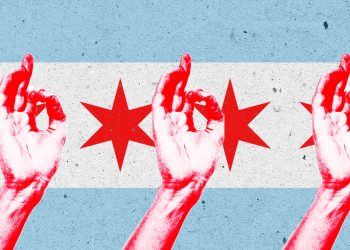 How did it come to this? For the second time in only a few weeks, an OK gesture, a symbol as old as salt, has led to a moronic cultural panic in the great city of Chicago.

On May 8th, the internet collectively lost their cool, thanks to just one fan’s hand gesture on a nationally broadcasted baseball game between the Chicago Cubs and the Miami Marlins. As the camera cut to reporter Doug Glanville, a man behind Glanville flashed the notorious OK hand signal, a gesture that has been the centrepiece to a non-sense debate about whether or not the gesture is far right.

Some viewers instantly related the gesture to the one made by the New Zealand Mosque shooter, who flashed the symbol at his first court hearing. Others, myself included, felt a phantom punch to the arm.

Since the 1980s, the OK gesture has been a key part of a schoolyard-type game, the circle game. To play, the person makes the OK gesture below their waistline and attempts to trick their friend into looking at it. If the person looks at the gesture, the person making the sign is allowed to punch the opponent’s arm. The game became popular with my generation after a Malcolm in the Middle episode featuring the game became popular.

The Cubs then permanently banned the fan from the stadium. Glanville himself played the victim. He opined an article for the New York Times, with one basic sentiment: “Ambiguity has always been a friend to racism.”

“Because I am a person of colour, the fan’s gesture suggested its sinister meaning.” Despite this, the man who was behind Glanville is technically allowed to punch all of us in the arm.

From my perspective, it was unwise for the Cubs to ban a fan from attending the game. The last time the Cubs barred someone from their events, they didn’t win a World Series for 71 years. (Though admittedly, the Curse of the Billy Goat is a lot catchier than the Curse of the Circle Game.)

The City by the Lake is OK-sign sensitive. That appears to be true. So when a Chicago high school noticed that their yearbooks were riddled with teens making the OK gesture, the only solution was to replace every single yearbook, no matter the cost. That cost ended up being $53,000.

Administrators saw 18 photos of students and staff of “various races, ethnicities, genders, and grades” making the white nationalist gesture, and immediately knew they had to pull the plug on the distribution of such hate.

Superintendent Joyless–Ehr, Joylynn Pruitt-Adams said that while the seemingly innocuous gesture could be interpreted as students playing what is known as the circle game, the upside down OK hand sign has also become associated with white nationalism and the far-right. (gasp)

“I want to be clear that we are not making any presumptions about students’ intent in using the gesture,” Pruitt-Adams wrote. “Regardless of intent, however, there is a real and negative impact. Many students, not only our students of color, experience this gesture as a symbol of white supremacy. Potentially subjecting our students to this trauma is simply not acceptable.”

I now unironically believe that, had the students flipped the bird to the cameras instead, administration at the Oak Park and River Forest High School could have saved $53,000 dollars, as even that gesture is less offensive than the horrid OK sign nowadays.

There is a resistance going on, though. Some refuse to let the symbol be appropriated by trolls from the depths of 4chan, including myself. And English comedian Stephen Fry.

For all of my white friends who ever use the OK emoji set to their skin tone, I say this: Enjoy it while it lasts! If I had $54,000, I’d bet that the fine people who design emojis are having some real conversation as to whether or not they should make the emoji colour-neutral (yellow) OR just remove the white skin tones altogether.

We’ve already seen emoji-makers go back and change the gun emoji to a water gun, so is it out of the question that they would update a controversial symbol that some are linking to the spectre of white supremacy? We’re going to have to wait and see, but the fact that this is even a debate really illustrates just how far deeply into lunacy we’ve delved.