Is gender dysphoria a birth defect? 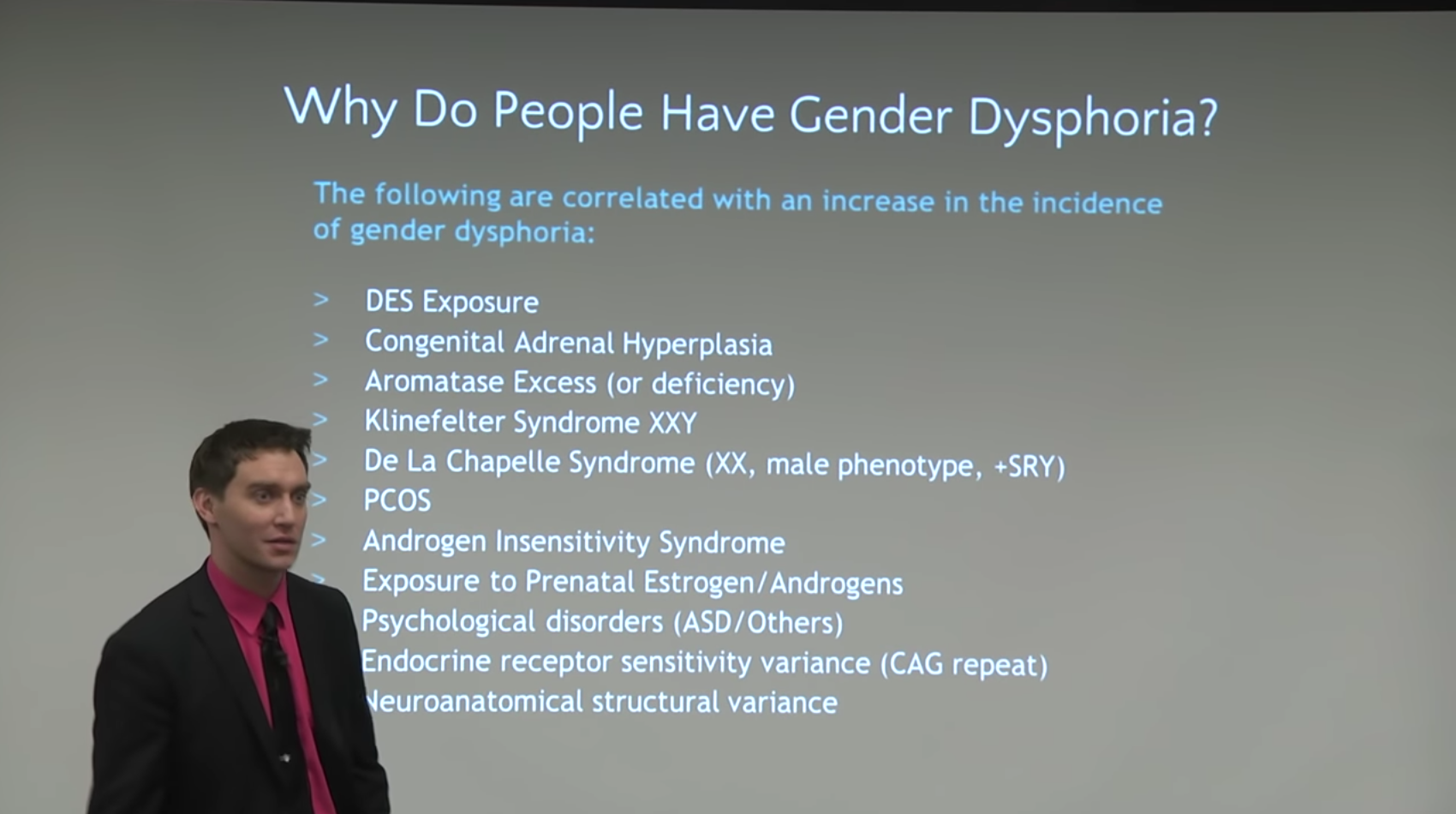 If gender dysphoria, the underlying medical condition surrounding transgender identity, was to be determined to be caused by genetic defects or complications from medication a transgender person's mother or grandmother took before or during pregnancy, how would this change the discussion around gender identity for conservatives? Many medical professionals in the field argue there is significant evidence to suggest this may be the case. One such expert, a Dr. William Powers, a popular Michigan family doctor who specializes in transgender treatment, provided an insightful presentation on gender dysphoria and the process of transition detailing this argument.

Dr. Powers is a board-certified family doctor who is a member of the Academy of Family Practice and the American Osteopathic Association. He studied neuroscience at the University of Pittsburgh and got his medical degree from Lake Erie College of Osteopathic Medicine. He has been honored in his field and is a sought-after physician treating over 1,500 transgender patients. The presentation linked above was to an audience of doctors at the 2019 Medical Education Week for Oakland University William Beaumont School of Medicine.

Dr. Powers argues that gender dysphoria is "effectively the modification of the neural architecture due to…something." Diethylstilbestrol, also known as DES, is one factor provided. The drug was prescribed between the 1940's and 1970's, longer in European countries, for women to help prevent miscarriages. Roughly five million American women were given the drug during pregnancy and between one and three million children were exposed with negative consequences. Curiously, there is a strong link between exposure to DES in the womb and homosexuality and gender dysphoria in males. Dr. Powers describes DES as a "super estrogen" being 600 times stronger than estrogen. "What do you think happens when you expose a male fetus to a "super estrogen" throughout the entire pregnancy?...We do. It's this."

Congenital Adrenal Hyperplasia is an inherited mutation in the genes that code for enzymes that create steroid hormones in the adrenal glands. It seems the overwhelming majority of women, Dr. Powers states the estimate to be 99 percent, with this condition are homosexual or bisexual. He argues, "The more severe the disease, the gayer they are." Of this population, 5.2 percent identity as male (transgender) compared to 0.3 percent of women in the general population. Dr. Powers argues that the condition is clearly influencing gender dysphoria.

Other conditions that are believed to correlate with gender dysphoria include aromatase excess or deficiency, Androgen Insensitivity Syndrome, exposure to prenatal estrogens or androgens, Endocrine Receptor Sensitivity Variance and other various intersex conditions in which a person's chromosomes do not express correctly. Although medical consensus has not been determined on causation. About half of Dr. Powers' male to female patients have a mutation that stores estrogen compounds rather than metabolizing them. Most male fetuses who are exposed to their mother's estradiol pass it through without absorption, however this mutation stores it, causing feminization of the brain, per Dr. Power's theory. There is also a very high correlation between autism and gender dysphoria.

Dr. Powers also states firmly that if he puts a female who believes she is male in an MRI machine the imaging will show a male brain. He cites the medical journal Neuroimage, 2009, Journal of Psychiatric Research, 2011, and the medical journal Cereb Cortex, 2015 as verifying this argument. He argues that gender identity can be viewed in neuroanatomy. Of his patients, prior to beginning hormone treatment, 20 percent of male to female patients and 85 percent of female to male patients have "considerable hormone abnormalities which deviate more than 95 percent from "average" values." The females in this study have elevated androgens in at least one if not more common male hormone categories. The majority of his patients have an, "underlying genetic, endocrine, or fetal exposure factor in the development of their gender dysphoria."

Considering this information, it would seem that a person with gender dysphoria is experiencing what other people experience when a vital part of their body does not function correctly from birth which requires medical intervention. Is this a birth defect that significantly and uniquely disables a person? As is well known and Dr. Powers points out, 41 percent of transgender people attempt suicide, dramatically more than all other patients with severe, even terminal diseases, combined. Even with medical intervention and surgery, suicidality is merely reduced, not eliminated. It is clearly a serious medical condition.

So, what are the implications of understanding gender dysphoria in this way? If the condition can be linked to genetic expression defects, exposure to abnormal hormones and/or defects in metabolizing hormones, wouldn't this be something that could be tested for in early pregnancy before brain development is impacted? If so, couldn't it be countered or corrected? Is the medical argument to cure gender dysphoria by preventing it from occurring?

Additionally, if brain scans are as reliable as Dr. Powers asserts, it would be a simple and definitive way to determine if a person is transgender or not. If there is a test for a sex-incongruent brain, why is this test not utilized in current transgender medical treatment? If a person does not have the indicators present in the opposite-sex brain, why would ethical medical professionals proceed with transition? If transition is little more than a personal decision without a verifiable medical condition, then how would any treatment be distinguished as "necessary?"

While Dr. Powers does not believe minors can consent to hormones or surgery, he advocates for puberty blockers in adolescence to "pause" puberty, which he recognizes many children outgrow in time. Why can't a child expressing possible gender dysphoria be tested for these genetic disorders, hormone or endocrine disorders and/or a brain scan prior to interrupting puberty for the purpose of "waiting to see" how they feel later on? The more evidence of congenital gender dysphoria, the less compelling the current Gender Affirmative Therapy argument is.

In 2016 the transgender population doubled representing 1.4 million Americans. In the UK over five years, reported in 2018, there was a 240 percent increase in referrals to gender clinics. Dr. Powers reports 2 percent of teenagers identifying as transgender when the general transgender population is 0.6 percent. Is it reasonable to argue all of this is due to the above discussed factors? If so, what is causing this dramatic increase? Shouldn't this be a public health concern more than a social issue if that is the case?

As science attempts to quantify and understand gender identity, conservatives are certainly challenged to consider the difference between a congenital defect with medical diagnosis and treatment and subjective identity, but so must LGBT activists. The more medical the condition becomes the more medical ethics and regulations must be put into place as is standard with all other medical conditions. Dr. Powers points out, "There are no major long standing American medical board organizations representing medical specialties with transgender standards of care." His practice is largely his own concoction of various off-brand treatments and medications discovered through trial and error.

Can LGBT activists continue to advocate for more open access to free treatments with less and less medical regulation, for younger and younger patients, with this information? Conservatives, I believe, can sympathize with a rare medical condition with transition being the most effective treatment to a permanent neurological developmental disorder underlying the concern, but can LGBT activists accept that identity alone isn't sufficient for medical intervention? It seems the entire conversation revolving around sex segregated restrooms, social and medical transition in children and minors, girls' sports, legal recognition and so on rely heavily on this question. Are LGBT activists ready to address that reality?

Dr. Power's PowerPoint presentation with citations titled, Healthcare of the Transgender Patient and the Powers Method of Transitioning, can be accessed from his website. Alongside the fascinating discussion of the origin of gender dysphoria, the presentation provides in-depth discussion into the full process of transition, debate, medications used, their side effects and other details of what a transgender person goes through. I recommend Ryan T. Anderson's When Harry Became Sally: Responding to the Transgender Moment and Abigail Shrier's Irreversible Damage: The Transgender Craze Seducing Our Daughters for more in-depth perspectives into the concerns surrounding this topic.