NDP leader, Jagmeet Singh co-signed a letter with Conservative leader, Andrew Scheer calling on the prime minister to recall the House of Commons next week to discuss the SNC-Lavalin allegations. 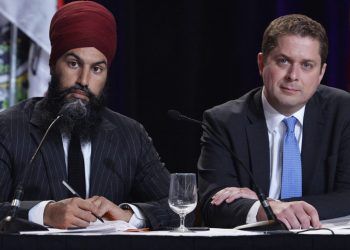 NDP leader, Jagmeet Singh co-signed a letter with Conservative leader, Andrew Scheer calling on the prime minister to recall the House of Commons next week to discuss the SNC-Lavalin allegations.

"As the leaders of Canada's two main opposition parties, we stand united in our belief that you owe Canadians nothing less than full transparency on this matter," said the letter.

The House of Commons has adjourned for a two-week break as the SNC-Lavalin allegations have come to a boiling point.

Jagmeet Singh has only recently been elected as an NDP MP in the Burnaby South byelection held on February 25th and is expected to be sitting in the house when parliament resumes.

"The day after Jody Wilson-Raybould's testimony, you did not appear in Question Period to answer for your actions as she described them. You have also recently shut down requests from Members of Parliament to have you testify at the Justice committee and to call a public inquiry into your actions and those of your senior officials," reads the letter.

Earlier this week, Andrew Scheer has also called for the Prime Minister to step down shortly after Jody Wilson-Raybould delivered her testimony before the justice committee.