After the NDP’s abysmal results in the 2019 federal election, party leader Jagmeet Singh has argued that it is neither his, nor the country’s fault that the NDP did so badly, but instead it’s the fault of the current electoral system. 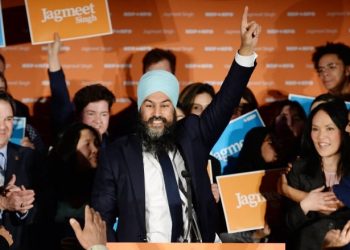 After the NDP’s abysmal results in the 2019 federal election, party leader Jagmeet Singh has argued that it is neither his, nor the country’s fault that the NDP did so badly, but instead it’s the fault of the current electoral system.

According to Global News, Jagmeet Singh will start campaigning for electoral reform after his party finished fourth behind the separatist Bloc Quebecois. Singh will suggest that Canada alters its electoral system from first-past-the-post (similar to the USA and the UK) to proportional representation, which significantly benefits minor national parties.

The NDP leader spoke on Tuesday, declaring that “the results [has shown] a broken electoral system and it’s certainly clear we need to fix it. I’ve long called for and will continue to call for true electoral reform.”

Nevertheless, democratic countries that utilize the proportional representation system often suffer instability when forming a government. This is due to the ability of smaller parties to gain a large number of seats. In Northern Ireland, for example, a government has not been formed in two years. Likewise in Israel, the proportional representation system has led to a total failure of the leading parties to form a government, creating deep polarization amongst the electorate.

In 2015, Justin Trudeau pledged to get rid of the current first-past-the-post system due to perceived representational deficiencies. This promise, however, never materialized.