The language used aligns with that of the pro-abortion extremist group "Jane's Revenge" and mirrors language used in a Molotov Cocktail attack against a pro-life organization in Madison, Wisconsin in May and the firebombing of a Buffalo, New York pro-life center in June. 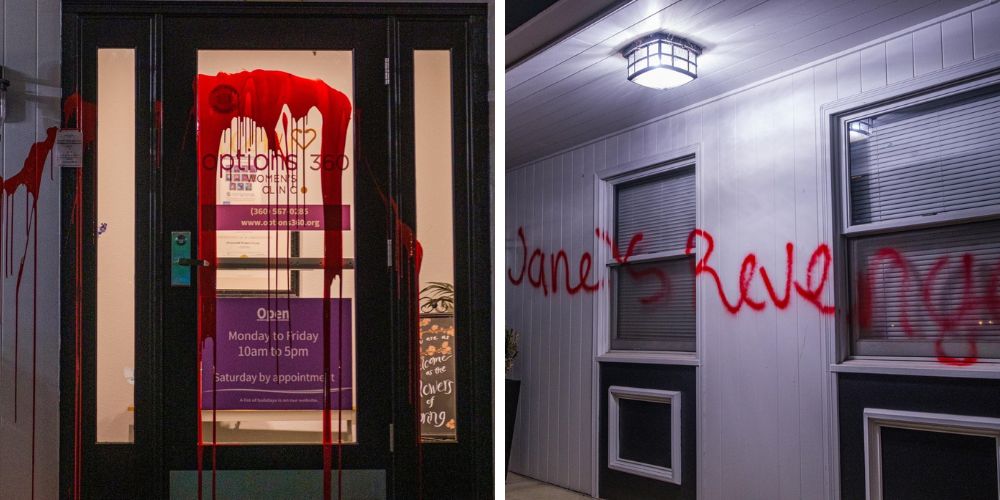 Options360 Women's Clinic, a pregnancy crisis center that provides educational and medical services related to sexual health, was found doused in red paint. Written on the walls in red of the building's exterior was "Jane's Revenge."

The language used aligns with that of the pro-abortion extremist group "Jane's Revenge" and mirrors language used in a Molotov Cocktail attack against a pro-life organization in Madison, Wisconsin in May and the firebombing of a Buffalo, New York pro-life center in June.

On Wednesday's episode of Human Events Daily, Jack Posobiec described Jane's Revenge as a "coordinated or decentralized network or movement of anarchists and violent radicals that are perpetuating these attacks" against pro-life pregnancy crisis centers.

An Antifa militant from Portland, Oregon was the first to post photos of the attack against Operations360 Women's Clinic on Twitter Thursday morning.

Earlier this week, a pro-life pregnancy clinic in Asheville, North Carolina was vandalized with the threat "if abortions aren't safe, neither are you" spray painted in red on its entrance.

Mountain Area Pregnancy Services is a Christian outreach ministry that "work(s) with families to honor the life of their child" as "all lives are precious, valuable, and ordained by God." The center's windows were smashed, and it was defaced with multiple pro-abortion slogans such as "no forced birth" and the anarchist symbol.

Jane's Revenge took credit for the attack and called on individuals to commit further acts of violence in a statement that was posted to social media stating, "Whoever you are and wherever you are we are asking for you to do what you can to make your anger known."