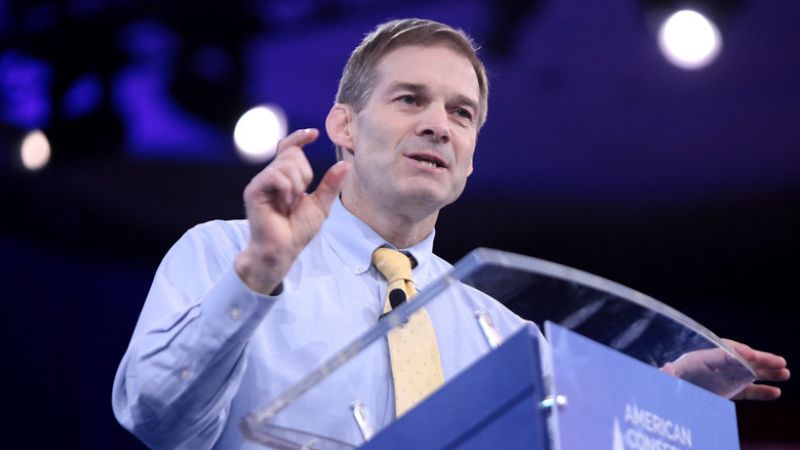 The Post Millennial
Sep 15, 2022 minute read
ADVERTISEMENT
ADVERTISEMENT
On Wednesday, Representative Jim Jordan sent a letter to the FBI requesting that they provide all documents and communications to the House Judiciary Committee regarding the FBI’s Domestic Terrorism Symbols Guide on Militia Violent Extremists.

The letter from Jordan to FBI Director Christopher Wray came over a month after Project Veritas released the guide to the public, which they had obtained from a whistleblower.

Jordan noted that they did not receive a response, and that "since our letter, new publicly available information and additional protected whistleblower disclosures suggest the FBI’s actions are far more pervasive than previously known."

Noting Project Veritas’ obtaining of the guide, Jordan noted that symbols and ideas like the Second Amendment, or 2A, "commonly referenced historical imagery or quotes" like the Betsy Ross flag or the Gadsden flag were labeled as symbols of "Militia Violent Extremists" (MVEs).

"Additionally, the FBI document also includes a section labeled 'symbols of militia networks some MVEs identify with,' and describes one group, called American Contingency, as 'mainstream media, nationwide, mostly online activity, low history of violence.' American Contingency is a company founded by former US service member Mike Glover, who has publicly rejected the FBI’s accusations that he is a terrorist and has described American Contingency’s charitable work on behalf of communities devastated by natural disasters," Jordan’s letter continued.

"The FBI’s recent characterization of American Contingency as a DVE organization is striking in light of new whistleblower disclosures that show that the FBI had concluded as recently as 2020 that the group was not a threat," the letter added.

Jordan explained that a whistleblower revealed back in 2020 that an FBI employee had flagged American Contingency as a "domestic terrorist group" because Glover "appears to be rallying individuals to 'take action'" and "speaks about his distaste for how the government is handling the current situations in the US and encourages people to 'join' his cause."

Notes made in the FBI’s e-Guardian incident reporting system revealed that the FBI had rifled through Glover’s life, including obtaining his military records, his veteran’s disability rating, and his monthly disability benefit, before concluding that the group "desires to assist Americans in preparing themselves for catastrophic events and not to overthrow the United States Government. A background investigation and review of Glover’s social media failed to support the allegation that Glover is a threat to the United States or its citizens."

Jordan wrote that the whistleblower information suggested that the FBI had opened an investigation into an American citizen because he exercised his First Amendment rights in being able to criticize the government.

The whistleblower commented: "It doesn’t take a First Amendment scholar to realize what is protected speech and what isn’t… It seems clear that this is an instance where an FBI employee reported something because it didn’t align with their own woke ideology… I think this is a primary example of how woke and corrupt the FBI has become."

Despite coming to the conclusion in 2020 that American Contingency was not a threat, the guide from the FBI still listed the group as a violent extremist report.

"This disclosure comports with other whistleblowers who have described how the FBI is pressuring its employees to recharacterize cases as DVE cases to artificially pad its data and advance a misleading political narrative," Jordan wrote.

The letter also stresses that requests made in the July letter were never fulfilled, and requested that those be addressed as well in their response.

Jordan’s letter expressing concerns regarding the reclassification of cases as domestic extremism comes as FBI agents expressed similar worries to the Washington Times.

"We are sort of the lapdogs as the actual agents doing these sorts of investigations, trying to find a crime to fit otherwise First Amendment-protected activities," he said. "If they have a Gadsden flag and they own guns and they are mean at school board meetings, that’s probably a domestic terrorist."
ADVERTISEMENT
ADVERTISEMENT
Rep. Jim Jordan