Berenson was permanently banned for tweeting "It doesn’t stop infection. Or transmission." 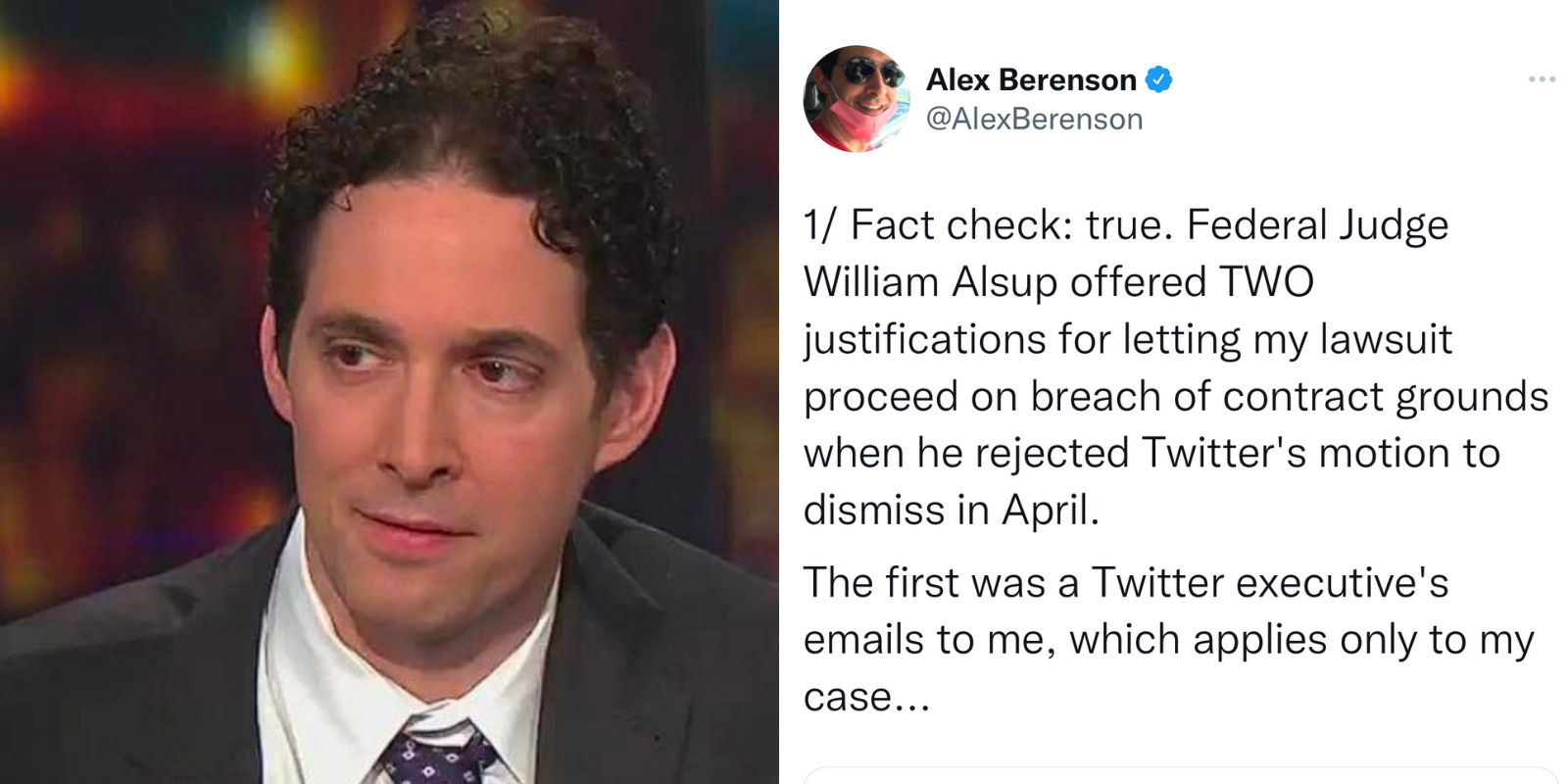 Twitter has recently settled a lawsuit with Alex Berenson and reinstated his account. After the reinstatement, Berenson posted some details about the suit to Twitter. Berenson said that the federal judge in the case, William Alsup, "offered two justifications" for allowing the "lawsuit to proceed on breach of contract grounds."

These were emails sent to Berenson by a Twitter executive, who per Berenson's account in the Wall Street Journal, repeatedly told him that "the company didn’t believe I was violating its rules." Then, on August 28, 2021, he was permanently banned for tweeting "It doesn’t stop infection. Or transmission." The second reason was that Twitter had been "modifying its terms of service when it set up its five-strike Covid misinformation policy."

Twitter had claimed at the time of the ban that it was Berenson's fifth transgression against their Covid misinformation policies, despite the senior executive's previous assurances. Furthermore, the Center for Disease Control and Prevention (CDC) currently recognizes that being fully vaccinated does not prevent the act of transmitting Covid-19 or becoming infected with the virus.

Berenson further explained the judges decision, saying that "once the company voluntarily sets guidelines that it says it will follow in disciplining or banning users, IT MUST FOLLOW THOSE - possible even if its underlying terms of service say otherwise..."

He quoted the ruling: "Plaintiff plausibly avers that Twitter's conduct here modified its contract with plaintiff and then breached that contract by failing to abide by its own five-strike policy and its specific commitments set forth through its vice president."

"In settling the case," Berenson writes, "acknowledging error, and reinstating me, Twitter has inherently - and publicly - accepted this theory of its contractual obligations." The important part of this, Berenson notes, is that this holds true for everyone.

"So if you've been banned for Covid misinformation - or ANY specific and named violation of Twitter's policies - and you have a plausible case that you did not in fact violate those polices - hello breach of contract case," he stated.

The groundwork for the ban began back on January 29, 2020, Twitter declared: "We’re committed to playing our part to amplify authoritative, official content across the globe." "Authoritative" and "official" are the keywords here that may point to a greater force beyond Twitter that may have had a hand in Berenson's suspension, and thousands of others.

On July 16, 2021, President Biden said Facebook and other social media platforms were "killing people" by allowing dissenting opinions on the mRNA vaccines. Apparently, this included proven facts on the vaccines as well. According to Berenson, it was a few hours later that Twitter locked his account for the first time.

"The settlement does not end my investigation into the pressures that the government may have placed on Twitter to suspend my account. I will have more to say on that issue in the near future. I made a promise to readers last month, and I take my promises to readers seriously."

Tesla CEO Elon Musk, who is in the process of acquiring Twitter, inquired what Berenson meant when he hinted at government involvement in his ban.

Berenson responded by saying that the settlement prevents him from expanding on the topic, but he hopes to have more to say on it soon.

In a Substack post from June right after a settlement agreement was reached, Berenson noted that he had emailed Musk about the lawsuit back in April of this year, but didn't hear back. "Elon Musk had nothing to do with what’s happening here," he added, to stop any rumors that the South African-American mogul may have had influence in the case.

Later in the day on Wednesday, Musk voiced his concern in response to a year-old Substack post from journalist Glenn Greenwald, titled "Congress Escalates Pressure on Tech Giants to Censor More, Threatening the First Amendment."

Author and former New York Times reporter Berenson stirred controversy on Twitter when he became a vocal skeptic of the COVID-19 vaccines, and was subsequently banned for his "harmful" takes on the efficacy of the mRNA treatment. According to Twitter policy, Berenson's violations were that he supposedly made "claims of fact" that were "demonstrably false or misleading" and "likely to impact public safety or cause serious harm."