BREAKING: Justice Thomas wants to know on what the right to abortion is constitutionally based

"But if I were to ask you what constitutional right protects the right to abortion? Is it privacy is it autonomy? What would it be?" 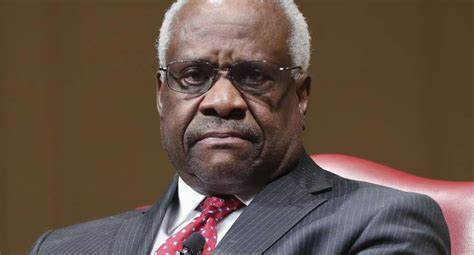 Supreme Court Justice Clarence Thomas asked one primary question during the oral arguments in the Court on Wednesday, as the Justices took up hearing a watershed case on abortion rights in the United States, and he asked it more than once.

Dobbs v. Jackson Women's Health Organization deals with the constitutionality of a law enacted in Mississippi in 2018 that prohibits abortions in cases where "the probable gestational age of the unborn human" was more than 15 weeks.

"It's liberty, your Honor. It's the textual protection in the 14th Amendment that a state can't deprive a person of liberty without due process of law, and the Court has interpreted liberty to include the right to make family decisions and the right to physical autonomy including the right to end a pre-viability pregnancy," counsel answered.

"So it's all of the above," Thomas asked. The two discussed cases for a moment, before Thomas went back to looking for an answer to his original question.

"I think it continues to be liberty," counsel responded, "and the right exists whatever level of generality the court applies. There was a tradition under the common law for centuries of women being able to end their pregnancies. But in addition, when it comes to decisions related to family, marriage and childbearing, the court has done the analysis at a higher level of generality. And that makes sense, because otherwise the Constitution would reinforce the historical discrimination against women."

Later, he asked general counsel this question again, looking for clarity as to what constitutional right backs that of abortion. "General," he asked, "would you specifically tell me specifically, state what the right is it specifically a board is that liberty is that autonomy? Is it privacy?"

"The right is grounded in the Liberty component of the 14th Amendment, Justice Thomas, and that I think that it promotes interest in autonomy, bodily integrity, liberty and equality. And I do think that it is specifically right to abortion here the right of a woman to be able to control, without the state forcing her to continue a pregnancy whether to carry that baby to term," general counsel responded.

"Well, Justice Thomas, I think that the court," counsel responded, "in this other context with respect to those other amendments, has had to articulate what the text means and the bounds of the constitutional guarantees and it's done so through a variety of different tests that implement first amendment rights, 2nd Amendment rights, Fourth Amendment rights. So I don't think that there is anything unprecedented or anomalous about the right that the court articulated in Roe and Casey and the way that it implemented that right by defining the scope of the liberty interest by reference to viability and providing the data is the moment when the balance of interests hips, and when the state can act to prohibit a woman from getting an abortion based on its interest in protecting the fetal life at that point."

"So the right specifically is abortion," Thomas asked.

"It's the right of a woman prior to viability to control whether to continue with a pregnancy. Yes," counsel responded.