"They’ve been outside all year. My kids have come home completely soaked from sideways rain. We’ve tolerated it until now. This is completely insane," one Washington state parent said. 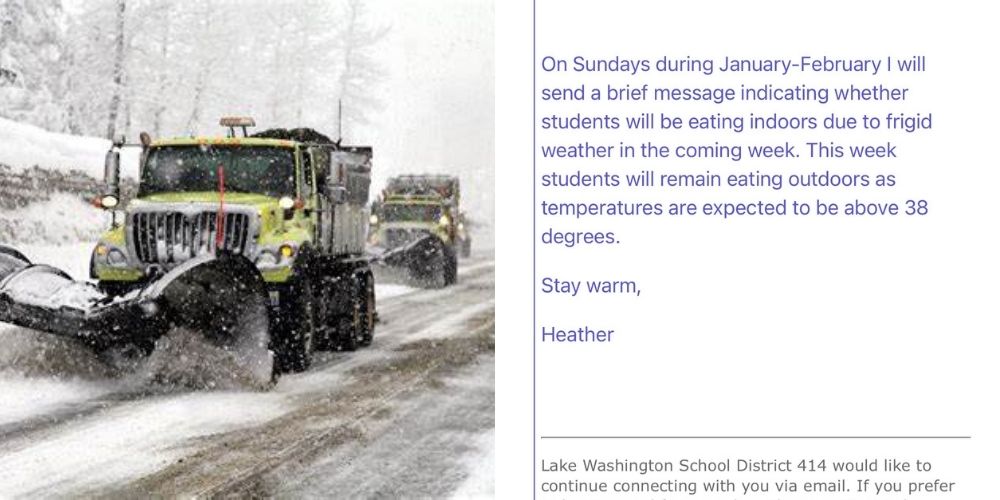 When they return from winter break, students as young as kindergarten at Lakeview Elementary School will be forced to resume the practice of eating lunch outside including on days when temperatures would be "expected to be above 38 degrees."

According to a January 2 email obtained by The Post Millennial, Heather Frazier, principal of the school which services children K through 5 grade, informed parents, "On Sundays during January-February I will send a brief message indicating whether students will be eating indoors due to frigid weather in the coming week. This week students will remain eating outdoors as temperatures are expected to be above 38 degrees."

The email signed off with "stay warm."

Parts of the state were pummeled by a snowstorm on Christmas. Freezing temperatures froze the snow and kept roads frozen over a week later. Rain finally began the thaw Sunday. Temperatures are expected to fluctuate this week between the 30s and 40s with with forecasted.

One parent told The Post Millennial, "They’ve been outside all year. My kids have come home completely soaked from sideways rain. We’ve tolerated it until now. This is completely insane."

According to that parent, though children are in a covered area outdoors, they are still exposed to the elements and "…they get 15-minutes start to finish so that children can rotate in and out! This means kids must go through the lunch line and eat in 15-mins. It’s all a shi* show."

The principal also sent an email dated January 1 which acknowledged the weather conditions.

"Good chilly morning to you! With frigid temperatures forecast intermittently over the coming weeks, we are moving students indoors for lunch whenever temperatures drop below Kirkland's 'normal' winter low of 38 degrees."

Frazier has said that "The 38 degree threshold was determined after looking at typical temperatures for December-February in Kirkland and a look at temperatures thus far in December 2021."

Frazier continued by outlining the school’s reasoning for the protocols. "Because indoor eating is unmasked and distances between students will be set at 5' we know that a positive Covid case will result in an increased number of identified close contacts and mandated quarantine."

The email did not address the rain and wind which are frequent during the winters in the Pacific Northwest.

Reports that more children were hospitalized due to the virus were contradicted by Biden's top Covid doc Anthony Fauci. In an interview last week, Last week Fauci clarified that these are children who are primarily hospitalized for other reasons, but are Covid tested upon admittance.

"If a child goes into the hospital, they automatically get tested for COVID and they get counted as a COVID-hospitalized individual, when, in fact, they may go in for a broken leg or appendicitis or something like that," Fauci said.

"So it’s over counting the number of children who are, quote, hospitalized with COVID as opposed to because of COVID."

The CDC reduced the number of days recommended for quarantine from 10 days to five days.

Even after the announcement, Principal Frazier added in her email, "If the CDC recommended reduced length of quarantine for both vaccinated and unvaccinated students is adopted, we will re-evaluate moving to indoor eating as our daily practice. A huge thank you to our PTSA for the wind/rain blocking banners that are making our outdoor lunch area much more pleasant!"

"Looking forward to the warmth of rainy days," she signed off presumably assuming so that the children would be eating outdoors again, even if the temperatures are below 40 degrees.

One parent of a 1st grader posted that another school in the Lake Washington School district had put out a call for 50 benches so that kids did not have to eat on the ground. The parent claimed that they had provided 10.

Another parent told The Post Millennial that the same practice was being used at schools including in the Riverview School District which includes the city of Duvall.

After the email was posted in a parents group, Duvall Mayor Amy Ockerlander posted a response justifying the practice with a link to an article entitled, Why Norwegian Parents Let Their Kids Nap In Below-Freezing Temperatures.

Despite the catchy headline the article said, "Before you go hucking your kid outside this winter, understand that Scandinavian parents have been arrested for the practice in the U.S. Also, these kids are equipped with weather-appropriate bundling and sophisticated baby monitors for safety."

The Mayor also wrote, "Eating outside in the snow/rain was standard during ski school last winter for my kids. They did just fine and they learned to be prepared for changing conditions, which meant they were willing to go out and play in the snow at 5 degrees for long periods of time."

"In Norway, babies nap outside in the winter. My daughter was exposed to Covid - in the lunchroom - right before break and had to miss the last week of school before break and because of that, we missed all but one day of my niece's visit from Kansas after 7 years."

She added that her children also had to miss time with her ailing mother who is undergoing chemotherapy and added, "There are many families in the same situation that I am aware of, including teachers and staff at our schools. If our district does this, it will be an inconvenience, but if the data shows it is safer it's not an issue."

She also added, "The kids are already outside at the bus stop and recess in this weather. For most an extra 15 minutes won't make a real difference and can help teach kids more responsibility for dressing appropriately for school (I say this knowing my son wants to wear shorts to school tomorrow - if he does, his discomfort is his responsibility) As with everything during the worst human pandemic in history, there will continue to be inconveniences for all of us until this thing is finally endemic and manageable."

In December, students at an elementary school in Portland, Oregon were filmed eating lunch outside, socially distanced in cold temperatures, allegedly to help mitigate the spread of COVID-19. The video went viral and even ended up a discussing in the White House briefing room. Other localities across the country, including New York, have this practice.

White House Press Secretary Jen Psaki even said that it is OK for schools to force children to eat their lunches outside in cold temperatures in order to "…keep their kids safe and keep students safe."

Psaki said at the time, "I have a three-year-old who goes to school, sits outside for snacks and lunch, wears a mask inside, and it's no big deal to him. I'm not saying that's the case for everybody, but these are steps that schools are taking to keep kids safe."

Some schools being even more extreme and are pivoting back to the failed model of remote learning.

President of the American Federation of Teachers union Randi Weingarten tweeted Sunday, "Because of the omicron transmission rates, and the number of educators who tested positive last week Newark Public Schools reverting to remote for 2 weeks. They don’t have enough staff."

Previously, the union was busted lobbying and influencing the Centers for Disease Control and Prevention’s guidelines on reopening schools.