Sheriff's deputy Felix Rubio, whose daughter was murdered, can be seen at one point trying to get closer to the classroom door only to be restrained by two officers. 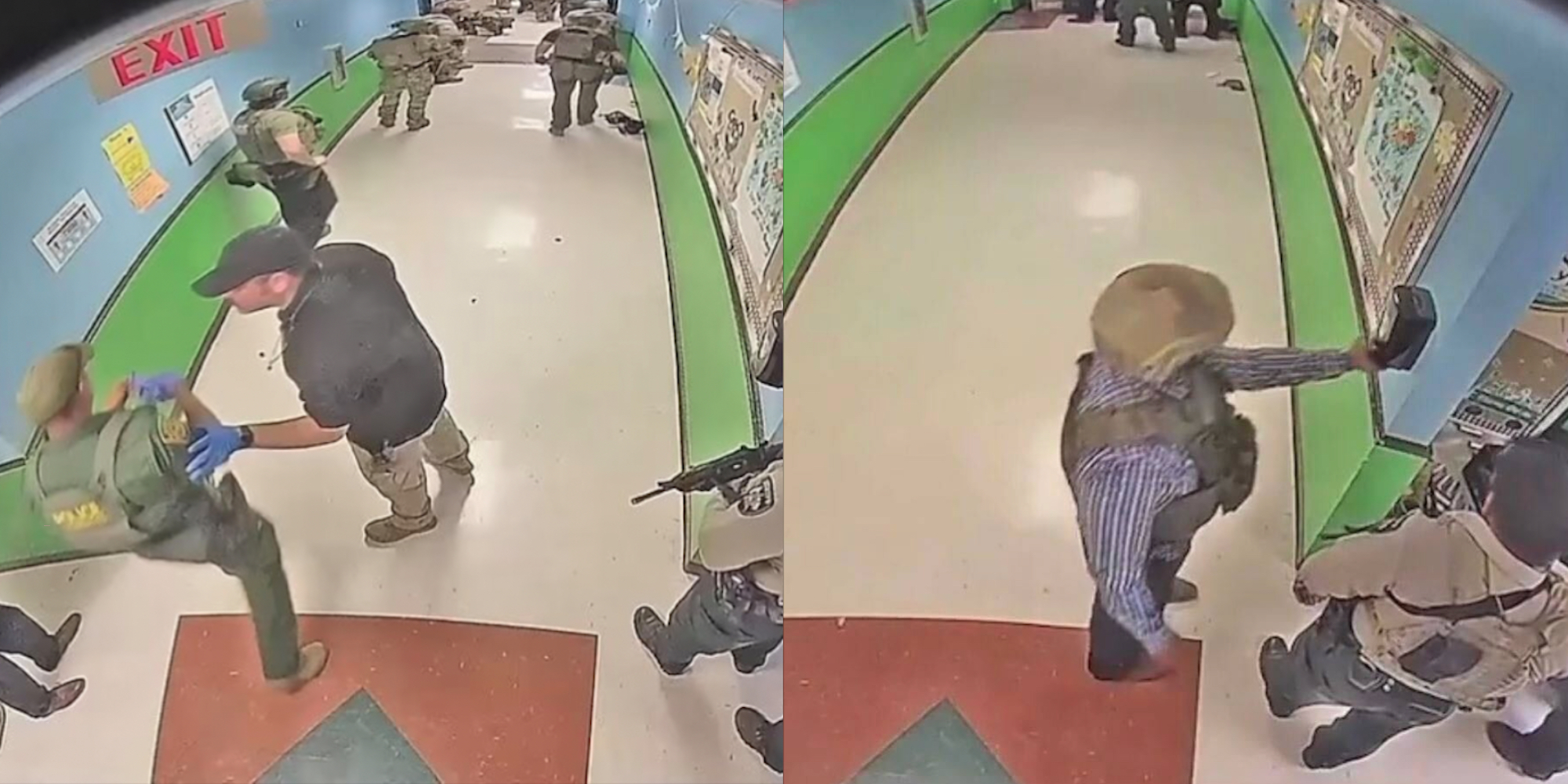 On May 24, a gunman entered Robb Elementary School in Uvalde, Texas and proceeded to murder nineteen kids and two teachers. New video shows officers standing in the hallway, children screaming, with one officer, whose child was in the room where the massacre took place, being held back by a superior.

Surveillance video shows the shooter calmly walking into the building and carrying out the attack. Police, who followed minutes later, congregated in the hallway with their weapons as the massacre took place. Another officer can be seen using the hand sanitizer on the wall, while another stands idly by, leaning against a wall, looking at his phone.

Gunman Salvador Ramos can be seen walking towards the building as a woman inside the school yells, telling students to get in their rooms.

Upon entering, Ramos walks calmly down the hallway before turning to enter a classroom. Just before he opens the door, a student sees him from afar and runs away.

In the following two and a half minutes, Ramos unloads over 100 rounds from his AR-15.

Police enter the building three minutes later and stagger themselves in the hallway as shots continue to ring out from within the classroom. Instead of attempting to break in, however, officers retreat. Even when re-enforcements arrive half an hour later with ballistic shields, no attempts to apprehend the gunman are made. Many at the scene thought the classroom door was locked, a claim that has since been proven false.

Seventy-seven minutes after Ramos entered the school, officers finally took action, barging into the classroom and shooting him.

Sheriff's deputy Felix Rubio, whose daughter was murdered, can be seen at one point trying to get closer to the classroom door only to be restrained by two officers.

While Ramos carried out his rampage, one officer checked his phone, while another nonchalantly applied hand sanitizer.

Blame for what Texas Department of Public Safety Director Steven McCraw referred to as an "abject failure" on the part of law enforcement has been placed at the feet of Pete Arredondo, the Uvalde Consolidated Independent School District Police Chief.

According to KERA, the footage was scheduled to be released on Sunday, however it was leaked by local news outlet, The Austin American-Statesman, and its television affiliate KVUE.

The outlets elected to release the footage "to provide transparency to the community" by "showing what happened as officials waited to enter that classroom."