In an era of a global pandemic we have been seeing the push for authoritarianism from the part of the political spectrum which had previously decried it: the left. 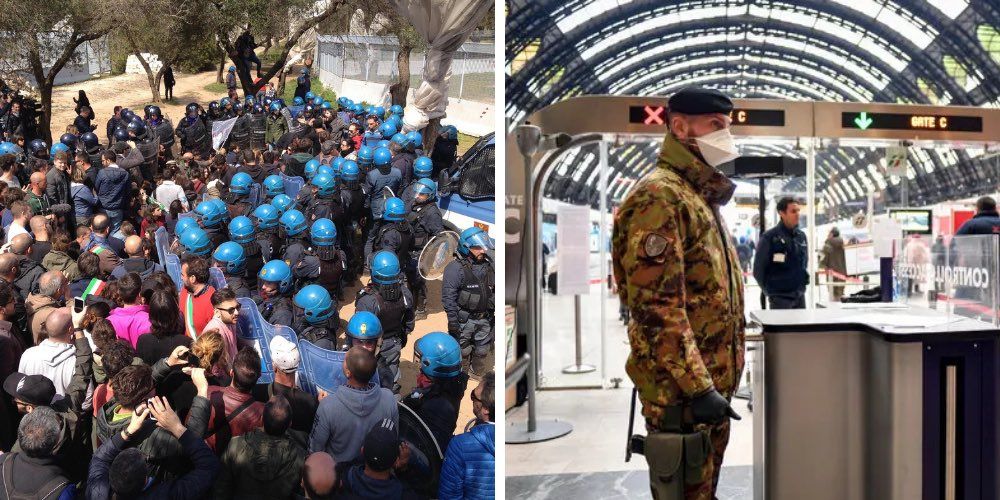 When lockdown started across Europe in February of this year, I was one of many people concerned about the dangers of this novel virus. It seemed to wreck as much havoc to the scientific foundations of virology as it did to the human body. Experts and researchers had few, if any, answers to COVID-19.

European governments were slow to react to the World Health Organization’s warnings about this virus that had originated in Wuhan. When the lockdown in Italy’s north was decreed on 23 February, the general sentiment was still one of confusion.

It was not until two weeks later—when the cases rose above 7,000 and deaths beyond 1,000—that Italians started to take the media and government messages about the virus more seriously. Once the Italian government announced a national lockdown on 9 March and the WHO declared that COVID-19 was a global pandemic on 12 March, Italian thinking suddenly shifted.

The populace went from thinking that this was a disease contained to a few and began to obey the ever-changing government decrees. These left most Italians quickly disappeared from public life, quarantined, socially distanced, isolated.

The political establishments of Italy had finally succeeded in creating a populace that feared leaving their homes. One which readily exercised the government’s orders, and took public obeisance of these mandates as a sign of virtue. Individuals treated scornfully anyone who dared to walk outside on the streets without a mask.

Now that lockdown has ended in many countries, including the US in its odd way, there are many questions to be asked as the cheering on of lockdown measures extended far beyond in Italy.

From political pundits to liberal and left-leaning parties and publications, we saw an en masse embrace of the lockdown. Any lockdown-critical voices were quickly marginalized or edited out by those voices who question to what degree lockdown was necessary, if at all.

British social commentator and journalist, Toby Young, launched the website Lockdown Sceptics earlier this year and was initially the centre of attack from the many leftists fearful that questioning the lockdown implicated a direct hit on their lives. The Guardian has run a series of hit pieces on Young’s website accusing those critical of lockdown as attempting to create a “culture war” or as using lockdown to revive the Brexit narrative.

Many critics on the left, like Jonathan Hafetz, who once regarded the domestic strategies of Bush’s Global War on Terror as Draconian and anti-constitutional in the aftermath of 9/11, which included the suspension of habeas corpus, have eagerly gotten behind the very same ethos, though it is designed to keep people beholden to state power.

All this, like the political aftermath to the terrorist attacks in the US of 2001, resulted in the excessive use of state powers and the overreach of police powers all based on the notion of the “state of emergency.”

Even in the UK, the opposition party to Boris Johnson’s government didn’t oppose the lockdown plan and Parliament didn’t even debate lockdown. All the people who were ready to take the British government to court over Brexit, as journalist Peter Hitchens, notes were silent. The overwhelming willingness of the British left to get behind lockdown has been a sight to behold for many.

I have been reporting on lockdown since February and was also taken in by the fear factor, as were so many of it. It led me to believe that a temporary lockdown might give scientists enough time to learn more about this virus and for politicians to come up with a better mitigation model that wouldn’t involve locking up entire societies.

By mid-March enough was learned about the demographic groups more severely affected by COVID-19, and the likelihood of dying from this disease, such that we knew that lockdown was not the best approach to mitigating the viral spread. In fact, some scientists have suggested that lockdown has only made the situation worse, not better.

Still, their voices have not been fairly represented in mainstream or alternative media. And when such voices are represented, for instance the protests in the US against lockdown, this is framed uniquely as emanating from far-right groups. This denies the underlying arguments being made by these individuals and weighs more heavily on caricatures of the right rather than the substance of their concerns.

Similarly, the neoliberal institutions of Twitter, Facebook and YouTube have faithfully followed the media lockstep which has genuflected to the words of Dr. Anthony Fauci. Bizarrely, Fauci seemed to have been anointed the unofficial head of the COVID-19 politburo, setting the standards for acceptable media voices like CNN, The New York Times, and The Washington Post.

CNN then used its own journalist as part of a hybrid experiment in reality TV as journalism with Chris Cuomo becoming the poster boy who would, hand to heart, narrate for all to see how dangerous this disease was. Of course, from the safety of his basement, we had only Cuomo’s narrative to believe, despite his ability to regularly suffer the effects of the illness the night before, never for the camera.

Meanwhile, liberal entertainment institutions like Saturday Night Live got in on the Fauci love-fest when Brad Pitt and other Hollywood liberal darlings joined Fauci to highlight the “need for a more unified global response to the pandemic.” But what on earth does that mean when these stars turn over their social media accounts to front line workers, even though the messages are already highly curated and redacted around what Saint Fauci has outlined?

We already know that any contentious voices to include those of two urgent care doctors, Dan Erickson and Artin Massihi, in Bakersfield, CA, have been removed from YouTube for stating what other experts have already stated: that the lockdown has led to other medical problems, including increased rates of domestic violence and enormous damage to our psychological health.

Similarly, if anyone dared to post a narrative on social media that reasonably critiques any of the dangers of the going COVID mitigation, such posts were deleted. This led to accusations of censorship directed at these media giants.

Few media outlets, until quite recently, have questioned this problematic marginalization of those who are critical of lockdown without pitting this as an evil right-winger against the innocent left. In fact, the major critiques of lockdown and the curtailing of democracy have been generally directed at countries like Azerbaijan, Serbia and North Macedonia where there is an assumption that countries “over there” are more prone to face the curtailing of democratic freedoms.

UK publication Spiked has been at the forefront of lockdown criticism with some amazing critiques of what has transpired this recently, before the mass protests, in one the biggest political breakdowns in recent British history. Boris Johnson’s advisor, Dominic Cummings, faced public outcry for having allegedly broken the very lockdown rules he helped author in driving from London to Durham in his private car.

Spiked editor, Brendan O’Neill noted that the fury over Cummings had far more to do with the older Brexit divisions between the left and the right than Cummings having secured childcare for his son, noting that: “Cummings Derangement Syndrome adds up to a serious breach of democratic and public norms. Bishops in politics, people calling the police about political advisers they don’t like, the celebration of civil service disobedience, the transformation of the private sphere into a political circus… none of this is normal, none of it is good.”

In a followup, O’Neill noted that the uproar over Cummings indicated a malaise in journalism surrounding COVID-19 and lockdown. He pointed out how many leftist British publications had repeatedly published false news stories in the drive to buttress public relations spin that Cummings must be guilty of breaking the law.

“Journalists are sacrificing their sense, their reason and their objectivity at the altar of their feverish Cummings obsession.” Indeed, those ten days of British media evidenced that fiction is readily printed and that the complicity between media and political parties goes unquestioned and journalism looks to earn more reader’s financial support by printing what news they would like to read.

In an era of a global pandemic we have been seeing the push for authoritarianism from the part of the political spectrum which had previously decried authoritarian curbs to freedom of dissent: the left.

How this will turn out is a matter of time as the numbers of those dead from COVID-19 versus those dead from hungry, thirst, and other diseases left untreated and unvaccinated will emerge in the coming years. For the moment, be wary of any voice from the media that mandates how you ought to think about this lockdown.