It seems clear that LGBT advocacy is more invested in keeping the community in fear, relying on advocacy groups to keep them safe from absolutely nothing. 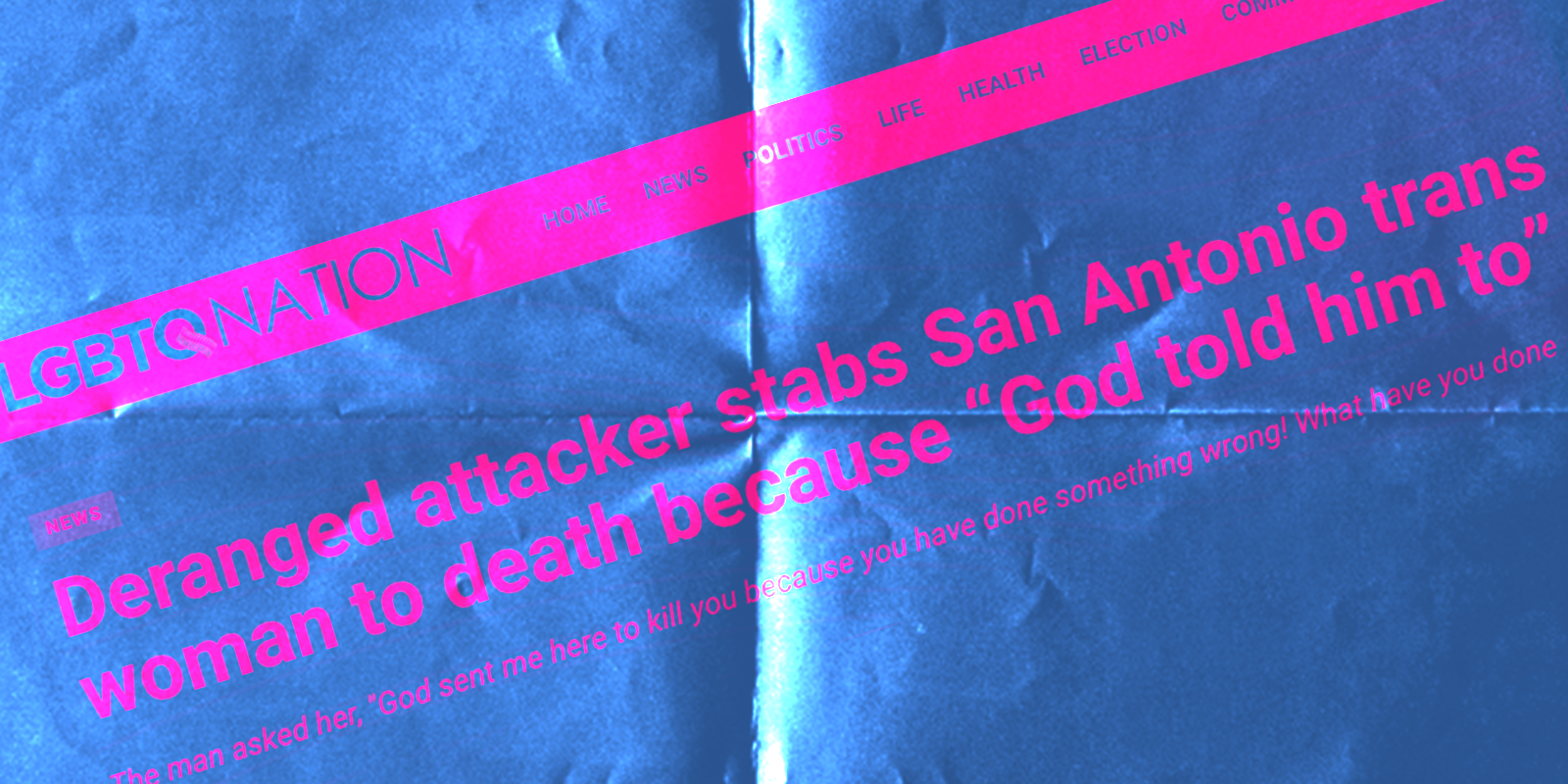 LGBTQ Nation, widely considered the most followed LGBT news website with 1.6 million likes on Facebook, posted the headline, Deranged attacker stabs San Antonio trans woman to death because "God told him to." The only problem was that Christianity was not the reason for the attack.

Following the headline, the article declares that the man asked, "God sent me here to kill you because you have done something wrong! What have you done wrong?"

One Facebook commenter declared in response, "Because of people like this, when someone goes out of their way to make sure I know they are a Christian, I decidedly keep my distance."

Another shouted, "It's time we all get together and take a stand, tell our respected state lawmakers that it's not ok to treat us as second class citizens!" They then demanded the killer be severely punished under hate crime law.

What the LGBT reader may not have been aware of, and which no one in the comments seemed interested in considering, is that the transgender victim was one of multiple victims in what appears to have been a random act of violence.

The attacker, Damion Campbell, entered Diesel Barbershop to book an appointment. When he was asked for payment he left angrily and returned with a gun and a knife and proceeded to hold the three employees hostage. Per local reports, “An arrest affidavit states surveillance video shows Campbell forced the three employees into the back of the shop. At one point, Campbell placed one victim ‘in a choke hold until he renders [victim] unconscious.'”

Shane Brown, CEO of Diesel Barbershop, said "A man attempted to kill three of my amazing employees. Three wonderful, kindhearted, give you the shirt off of their backs, loyal employees for no reason at all. None. In fact, detectives tell us this appears to be a completely random act of violence. And because of that random act of violence, one life has been ended and a family is forever changed, two employees will be forever scarred and changed by this, and the entire Diesel Family is reeling in shock. We’re all just numb now. Numb."

The LGBTQ Nation article acknowledges the facts of the case stating, “Even though police don’t think Campbell targeted O’Regan for her gender identity, her death makes her the 11th trans person to be murdered this year.” Later on towards the end of the article they state, “It’s unclear what led him to attack the employees.”

What would you picture if you saw a headline stating that a man stabbed a transgender woman to death while shouting that “God told him to?” What would you feel if you were an LGBT person marinated in media telling you that conservative Christians hate you and violence towards transgender people has become an epidemic? How would you interpret the world around you as a gay or transgender person if you scrolled by the headline and never saw anything more than those words and the reaction to it? You would probably believe a lie.

It seems clear that LGBT advocacy is more invested in keeping the LGBT community in fear, relying on advocacy groups to passionately "fight" for them to keep them safe from absolutely nothing. This was a random act of violence by a mentally disturbed person. To exploit this tragedy to push a false narrative of hate-motived violence is beyond irresponsible. From 2015 to 2019, out of 118 reported murders of transgender persons in the United States, 4 could be described as anti-trans hate crimes. Why is it so important to LGBT advocacy for LGBT people to live in fear, developing deep hatred for people falsely accused of targeting them for violence?