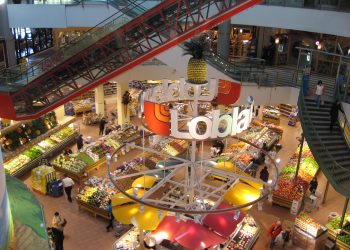 In the live announcement, McKenna praised Loblaws for its effort in fighting climate change by reducing electricity consumption.

“Loblaws will receive over 12 million from our Low Carbon Economy Fund to help the company convert the refrigeration systems in approximately 370 stores across Canada over the next three years,” said McKenna. “This is the equivalent to removing 50,000 cars from the road.”

The Low Carbon Economy Fund was first introduced by McKenna herself in June, 2017. The $2 billion fund is intended on encouraging and rewarding businesses and organizations to reduce their carbon footprint and better protect the environment.

However, as one Twitter user, Sean Craig pointed out: the company which makes $800 million in net earnings per year has recently admitted to a bread price fixing regime which adversely affected the poorest of Canadians.

“The arrangement involved the coordination of retail and wholesale prices of certain packaged bread products over a period extending from late 2001 to March 2015. Under the arrangement, the participants regularly increased prices on a coordinated basis. Class action lawsuits have been commenced against the Company andWeston as well as a number of other major grocery retailers and another bread wholesaler,” the company admits.

After facing a class-action lawsuit, the company offered customers a $25 Loblaws gift card as compensation. After the price-fixing regime was revealed, a $1 billion class action lawsuit was instigated by a woman from Elliot Lake, Ontario.

Irene Breckon, the anti-poverty activist who is the lead plaintiff in the case, alleges that the company profited by overcharging poor Canadians for the basic goods.

“They don’t have money for the basics, and then when you find out  that these large corporations are cheating us, it’s just wrong,” said Breckon.