Libs of Tik Tok, on Twitter, Instagram, and via email newsletter, is an account that culls the internet for evidence of the most insane aspects of the culture war that is raging in the United States. 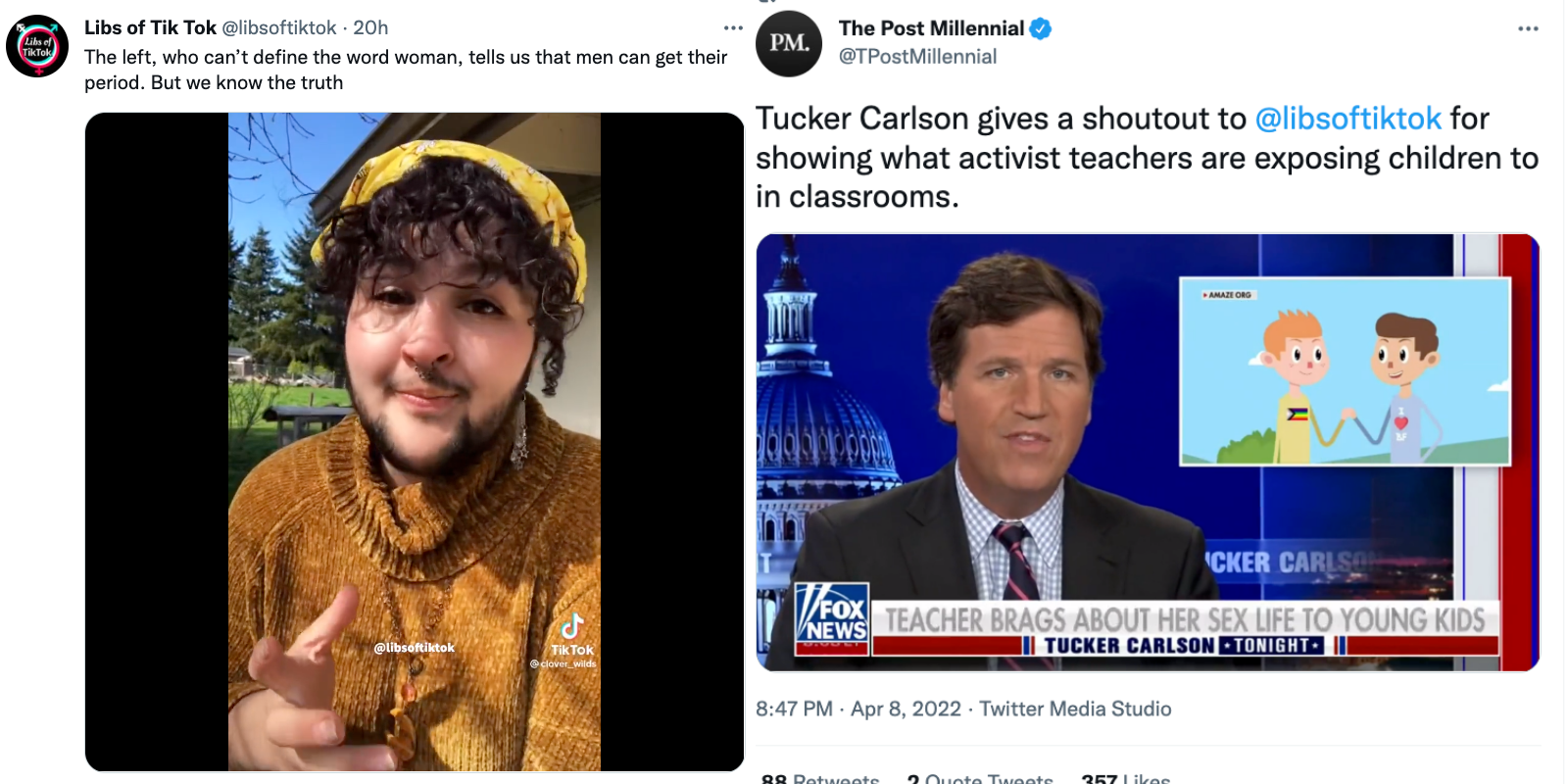 The Post Millennial caught up with the anonymous creator of Libs of Tik Tok, who has become an internet sensation. Libs of Tik Tok, on Twitter, Instagram, and via email newsletter, is an account that culls the internet for evidence of the most insane aspects of the culture war that is raging in the United States.

From video evidence of critical race theory being applied to school curriculum, gender identity indoctrination, or the sheer narcissism evidenced by those who have replaced the concept of the soul with one ensconced in gender, Libs of Tik Tok brings it all to the surface, like a deep sea fisherman of American culture.

The Post Millennial wanted to know what Libs had gleaned about American culture while doing this deep dive, and asked her to take a birds-eye view of what she had uncovered over the past few years.

"You're looking at it from ground level, from the bottom up. You're seeing everything like emerge in real time," The Post Millennial asked Libs. "What's your perspective on the state of American education, given how often you're seeing teachers express their views on how involved students should be in gender identity and conversations on sexual orientation?"

"I think that the American education system is completely and has completely been taken over by leftists," Libs said. "From the top down, we have the school board, the superintendent, the teachers, the staff, and it has been completely taken over over the last few years. So what we're seeing is the like push for, you know, the woke agenda, which includes, obviously, the sexual stuff and the critical race theory, and even some anti-American propaganda. We're seeing all of that being incorporated into all the schools, which are run by these crazy leftists."

Libs mentioned that there had been some progress on school boards, with help from conservative not-for-profits, that have helped remove far-leftists from school boards.

"So I do have some hope," Lib said. "Also, a lot of parents are really getting awakened now. My account has been very influential on this, as well as other accounts and media outlets, in really showing parents what is going on in the schools that they otherwise wouldn't know or realized. So I think that I do have a lot of hope for for the future. And I think that we're going to retake our school."

Libs praised Florida's Governor Ron DeSantis, saying that "he has been a front-runner," and that his work has been "really incredible."

"I think that other red states will follow his lead," she said, "and even in the blue states— I think that what we saw happen a couple months ago in San Francisco, which is one of the most liberal cities in the country, we removed three of their leftist school board members because they were just too they were too insane, they went way too far. I think that even parents who are not Republicans are really sick of it."

"So the average parent doesn't want their six year old to be taught about and to be taught about pansexuals," she said. "I think that taking all that into account, we're definitely going to win back our schools and we're going to take them back and we're going to get rid of these groomer teachers. So I do have a lot of hope, but right now it's, it's completely overrun by leftists. I would never in a million years send my kid to a public school right now."

Part of the problem, Libs said, is that even in conservative areas parents weren't "really paying attention, or realizing what's happening, and these leftists managed to take over the school boards and conservative areas, too. That's the scary part, every single school board, literally, minus a handful, is run by leftists in red states, red counties, red cities, everything everywhere. They're everywhere, but they're slowly getting pushed out."

Libs didn't start the groundbreaking account with the idea of exposing the rot in the American educational system. Instead, she said, "it started with the just like funny pics. And then, yeah."

She was surprised, too, that the account had this kind of impact on culture. "It just keeps getting more impactful and growing more and becoming more influential by the day," she said.

"I mean, not just referring to like the follower counts which are going up, which whatever, it is great and all, but the actual impact I'm having on our culture and policy, that it keeps growing as the account and the brand grows. And that I never saw that coming. It was never my intention or goal," she said.

"It didn't start with like 'oh, the schools are crazy. Let me start an account to show that,' it just progressed and happened over time. And every time someone like an elected official actually like interacts with the account or I hear through some sources that I have that an elected official thought saw of the content, I'm in awe all over again," she said.

Libs mentioned the recent, direct impact of her work in Texas. Libs had exposed a a school in Austin that was teaching kindergarten students about gender and sexual orientation, going so far as to hold Pride week events with drag queens, and an activist parade. When the Texas Attorney General's office got wind of it, they took action.

"And then his staff was messaging me like information, we were just messaging back and forth. And I was like, 'This is so incredible that I'm like doing all this work and the attorney general of Texas is actually doing something about it.' It meant the world. It was it was really great," she said.

Libs said that journalists and media outlets that are coming after those parents who speak out are making a mistake, saying that the outlets that claim there's dark money behind parents groups, or that the parents are speaking out are racist or bigoted, are just going to "alienate" people.

"It's not just Republicans, it's Democrats too," she said, noting that "no parent" wants their kindergarteners to learn about pansexuality. "So by the left doing what they're doing, they're just going to alienate all of their voters."

As to President Biden's message to parents to "affirm" their kids, Libs said "there's no such thing as a trans kid, there's no such thing. It doesn't exist. No kid knows that they're trans on their own. A parent or a teacher, or an adult is pushing them into it. And it's disgusting."

"How dumb could the President be to say now," Libs said, "right after what was just exposed at Disney, and parents waking up to the sexual grooming of kids. And it is across the entire political spectrum that parents are waking up and are starting to pay attention and speaking up about it, and he's coming out and saying that you need to affirm a six-year-old's transness."

The Post Millennial asked Libs why she thinks the left is so gung-ho on turning kids the opposite sex, and she said that this is something she's asked herself a lot, but isn't "a hundred percent sure."

"I think that what the general consensus of leading political commentators on the right is that people who are confused about their identity are easier to control and to become puppets for what you want them to do," she said.

Libs wasn't into politics at the outset, though she was raised conservative. "I was never really involved," Libs said. She grew up with Republican parents, but it wasn't until she started digging into it herself that she realized just how crazy the agenda of the Democrats had become.

It wasn't until she started digging into the project of Libs of Tik Tok that she got really into it. "Now it's what I do all day," she said.