Why sex-selective abortions should be banned

Terminating a pregnancy because the fetus is female devalues all women. 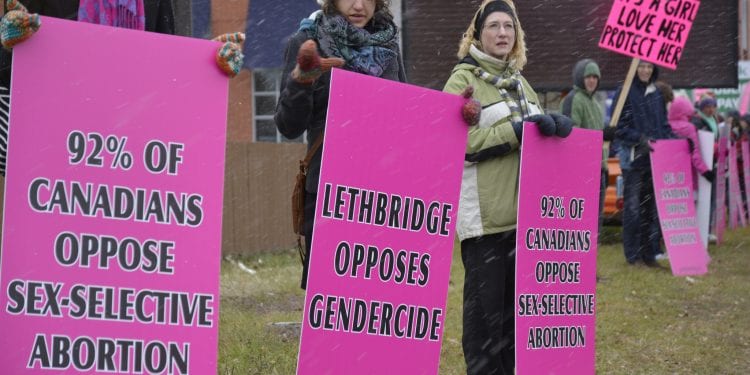 When someone is chicken-hearted, they are “timid, fearful and cowardly.” Such is the case with the leaders of Canada’s three main political parties on the issue of female feticide: “the selective abortion of female fetuses.” Justin Trudeau, Andrew Scheer, and Jagmeet Singh don’t want any legal restrictions on abortion. However, without legislation, the practice of female feticide will continue. A 2016 study found that sex-selective abortions are being performed in Canada. The study examined 177,990 births to women who immigrated from India. While there was no evidence of Canadian-born women having such abortions, there were “at least 4,472 missing girls" among Indian-born mothers. The normal sex ratio at birth is 103 to 107 boys for every 100 girls. The study found that the sex ratio for Canadian-born mothers was within the normal range: 105 boys to every 100 girls. However, for Indian immigrant mothers, the sex ratio increased with the number of births. By the third birth, the ratio was 138 boys for every 100 girls, and by the fourth birth, 166 boys for every 100 girls. This proves that thousands of Indian-born women in Canada have aborted a female fetus after giving birth to girls. The disturbing practice of Indian women aborting female fetuses is rooted in traditional Indian culture where a higher value is placed on having a son over a daughter. As a result, sex-selective abortions are common in India along with infanticide of baby girls. The country’s 2011 census found that there are 7.2 million more boys than girls under the age of 6. The normalization of female feticide has created a devastating social problem: a shortage of marriageable women. In contrast to traditional Indian culture, it is rare for Canadian-born women to place greater value on a boy over a girl. To have an abortion simply because the fetus is female violates Canadian values of equality. Nevertheless, the leaders of the Conservative Party, Liberal Party and NDP are unwilling to pass any legislation that would ban such abortions. Andrew Scheer has decided to follow Stephen Harper’s policy position of not allowing any legislation on abortion. Although Sheer is pro-life, he doesn’t believe he can win an election by restricting abortion rights. Justin Trudeau, who claims to be a Christian, is the most pro-abortion Prime Minister in Canadian history. Under the Canada Summer Jobs program, he denied funding to pro-life groups and churches that refused to sign his pro-choice values test. Trudeau celebrates abortion as an unlimited right. Of the three party leaders, Jagmeet Singh, a member of the Indo-Canadian community and a practicing Sikh, should be the most vocal critic of female feticide. (Because Sheer and Trudeau are both white, it is more difficult for them to condemn the practice without being accused of racism.) Unfortunately, Singh has the same policy position as Trudeau: that there should be no restrictions on abortion whatsoever. Contrary to popular belief, limiting a woman’s right to an abortion does not violate the Charter of Rights. When the Supreme Court struck down Canada’s abortion law in 1988, it invited Parliament to draft a new law. (Brian Mulroney’s Conservative government passed abortion legislation in 1990, but it died in the Senate in a tie vote.) Twenty-eight years later, Canadians are still waiting for legislation. While opinion polls consistently show majority support for a woman’s right to have an abortion, polls have also shown that a majority of Canadians are also opposed to sex-selective abortions. Some people will argue that politicians should not impose their personal views on Canadians when it comes to abortion. This is nonsense. Any political party leader who wants to ban abortions on the basis of sex could campaign on it in a federal election. If their party wins, they would have the consent of the electorate to pass legislation. It is time for Trudeau, Sheer and Singh to stop being chicken-hearted. In the next federal election, they should all promise to ban sex-selected abortions. Female feticide should be illegal for a simple and obvious reason: Baby girls and baby boys both have equal worth. Terminating a pregnancy because the fetus is female devalues all women. Anyone who believes in the equality of the sexes and supports female feticide is guilty of doublethink—believing two contradictory things and claiming that both are true.