A 2-year-old must wear a mask, but AOC and additional glitterati were dressed to the nines and face-mask-free at the annual Met Gala. 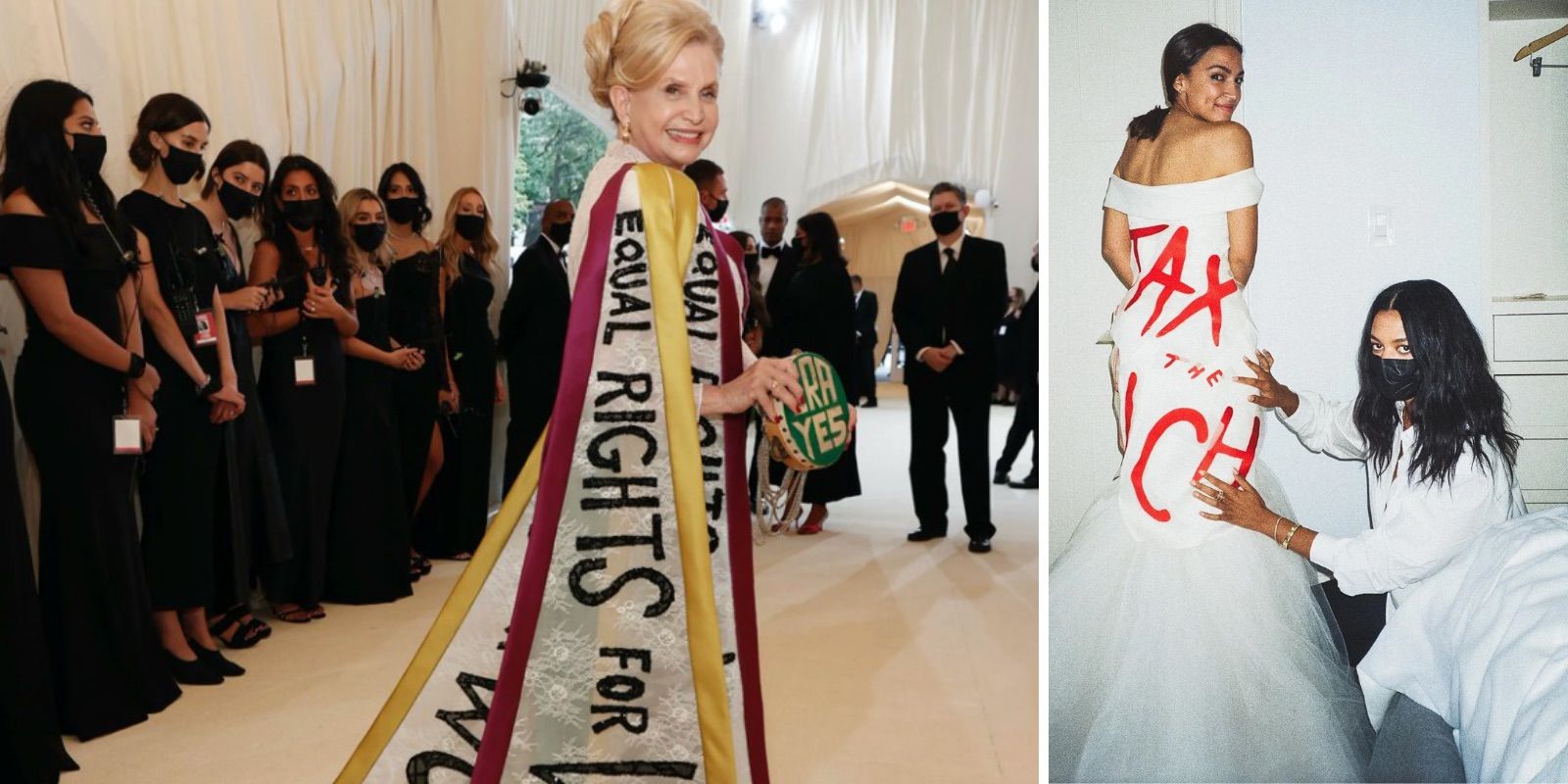 The Metropolitan Museum of Art has required that all visitors show proof of vaccination, and wear a face mask, to enter the museum. However, photos from Monday night's Met Gala show political and entertainment luminaries not masked, with full smiles, while staff was masked.

In photos from the event it is easy to see who was permitted to remove their masks and those who were prohibited from doing so, in service to their celebrity "betters."

The Met's policy specifically and unequivocally states that masks are required for all visitors over the age of 2 years old. A 2-year-old must wear a mask, but AOC and additional glitterati were dressed to the nines and face-mask-free at the annual Met Gala.

Tickets for the Met's annual fundraising bash begin at $30,000, while tables go for in excess of $200,000. Last night's gala featured New York Representative Alexandria Ocasio-Cortez, teeth and all, wearing a dress emblazoned with the words "tax the rich." She mingled with those wealthy people while the attendants wore face masks.

Her colleague, Rep. Carolyn Maloney, also of New York, was bedecked with a cape sporting the words "Equal Rights for Women."

Maloney smiled for the camera, regally displaying her cape, while Met staff stood against the wall wearing black dresses and black face masks. Maloney's smile was crystal clear and gleeful as she posed for her cause of "equal rights for women," except for the women who were not permitted to show their faces.

Lots of celebs were unmasked, too. And the Met glorified their appearances at the star-studded party.

Masks are seen on photographers and staff, as well as perhaps some guests, but there are many who do not appear to be required to adhere to the face mask policy.

Nikki Minaj was one celeb who did not attend the gala, in part due to their requirements to prove vaccination. Minaj has not yet been vaccinated, and has stated that she'd like to make her own decision based on further research. She also said that, with a small child at home, she did not want to travel.

The Met was reached for comment, and said that the requirements for the event were much more rigorous than for regular visitors. Proof-of-vaccination was required, along with negative rapid PCR test just prior to the event. Organizers instructed guests and staff to mask up inside, unless eating or drinking.

Perhaps the maskless put their face coverings back on as soon as the photos were over, and they sipped their martinis through straws snaked under face masks.

The reopening of the Met, which sits on Central Park, to visitors was a welcome respite for many New Yorkers last year, after it had been closed during the early part of the pandemic. Admission is pay-what-you-wish for locals, who have a tendency to view the Met as their own museum, for which their tax dollars entitle them to entry.

About 10 percent of the Met's operating budget comes from the City of New York, and admissions policies and changes thereto must be approved by the city. The city has required public spaces to demand proof-of-vaccine for entry, and the Met implemented this policy in August, as soon as Mayor de Blasio announced his executive mandate. Admissions account for about 14 percent of the museum's funding.

The Met is not meant to be an elitist institution, but a palace for the people, where New Yorkers rich and poor can see world-class art, can glimpse ancient history, and marvel at the spectacle of human creation. The Met is barring New Yorkers from attending unless they are masked, but they have permitted celebrities and politicians to grace the place with their smiles and open-mouthed laughter.

Whether for photo ops, or for the whole night, this flagrant violation of its own policies is one about which the Met should be unabashedly ashamed. And it's an admission, by those wealthy elites of New York City, that they see the rest of us as nothing more but servants, waiting to do as we're told, too filthy to breath the same air.

This article was updated with information from the Met in response a request for comment.