Mollie Hemingway: 'A country has not survived with two standards of justice'

"Rule of law has to mean one rule of law, not the variables you see weaponized right now by the administration," said Hemingway. 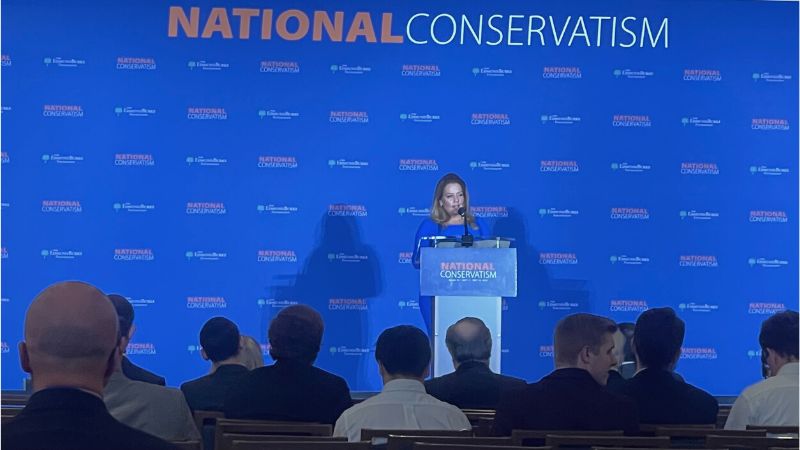 Focusing on federal law enforcement agencies, Hemingway recounted how the Department of Justice has been "fully weaponized" to "persecute political opponents."

Hemingway noted the usage of the Department of Justice to go after concerned parents late last fall, attempts to restore election security, or the numerous attempts to go after former President Donald Trump.

"Previous to this administration, the Department of Justice and its Federal Bureau of Investigation was exposed to having been party to one one the most horrific attacks on our republic in history.

"It weaponized campaign dirty tricks, bought and paid for by Democratic presidential candidate Hillary Clinton, and accused her electoral opponent Donald Trump of being an active Russian agent."

Hemingway noted that the subsequent investigation had "no basis whatsoever," and that the department had tried to prevent Trump from being elected.

Once elected, the department "continued the lies to undermine the will of the American people as expressed in their election."

Noting the "propaganda press," Hemingway noted that members of the media continued to push lies about Trump’s ties to Russia and the validity of the 2016 election.

"In addition to the Russiagate hoax, they were also co-conspirators. The FBI also lied to Big Tech companies to get them to censor the Hunter Biden laptop story, a story about the Biden family business and its potential corruption. The FBI raided Trump’s lawyer’s office and then leaked his privileged communications," she said.

Hemingway said that the treatment of violent protestors across the country in 2020, many of whom were had charges against them that were dropped.

"One particular example of our true standards of justice and what they do to a country. Following the murder of George Floyd in Minneapolis in 2020 extremist groups such as Black Lives Matter coordinated more than 10,000 demonstrations across more than 2,700 locations in all 50 states plus the District of Columbia," said Hemingway.

"The scenes that came out of the riots around the country the first weekend of June 2020 were apocalyptic, although the media did their best to downplay the carnage," she continued, noting the infamous footage of a CNN reporter in front of a burning building saying that the rioters in Minneapolis were "mostly peaceful."

25 Americans were killed in these riots, which cost insurers more than $2 billion, all while the media relentlessly referred to them as peaceful, or mostly peaceful.

Noting the toppling of statues that occurred across the country, not just of confederate figures, Hemingway spoke of Trump, who’s aid that these topplers would not stop with the confederate statues, a statement which was fact checked.

"The 100 largest US companies pledged more than $1.6 billion to BLM and related organizations… The exceedingly and vanishingly few companies that support non-leftist movements, by contrast, are harassed and targeted," said Hemingway, citing the examples of Goya and Wendy’s.

"Celebrities and Democrat politicians also worked to bail out rioters who have been arrested for violent actions in Minneapolis and other cities. In Minneapolis, businesses and police precincts were getting fired on, businesses were being looted, and schools were being attacked by rioters, then Senator Kamala Harris tweeted, 'if you’re able to, chip in now to the Minnesota Freedom Fund to help with bail.

This bail fund, with the help of Harris and other big name celebrities, was able to raise over $35 million. Many of those bailed out had previously committed violent crimes, and went once, once bailed out by the fund, to commit more violent crimes.

"The downtown area around the White House was wracked with violence as a result of these protests, which got out of control on May 31," said Hemingway.

Hemingway noted the various fires that were set in the area near the White House, and first responders had issues attempting to respond to scenes.

"Aerial shots of the fires on cable news made it look like the White House was in the middle of a war zone. Protestors closed with law enforcement at the barrier set around the White House, and at least 60 members of the Secret Service were injured in the chaos."

Hemingway spoke about the media backlash to Trump taking a photo outside of St. John’s Episcopal Church, which many said the area of Lafayette Park, which lies between the church and the White House, had been cleared of protestors solely for this photo. It was later proven that the area had been cleared to install additional security fencing.

Hemingway told the crowd that despite the violence seen across the country in cities like Portland and DC, "very few people… were even charged with offenses," noting that nearly "95 percent of the time" charges were dropped.

She contrasted the difference between the federal government’s handling of the riots of 2020, and the prosecution of those who partook in the riot at the Capitol building in January of 2021.

The Department of Justice "put all its resources to bear on the pretrial detention and imprisonment of anyone who was anywhere in the proximity of the Capitol riot whether they were violent or not," said Hemingway.

"The US Congress that cared hardly at all, if at all, about what Americans are going through as their cities and businesses and homes were set ablaze, put aside the unimportant work such as" the countries borders, the economy, threats posed by China, and more, "all that unimportant work has been set aside, so that anyone who has any questions about what is arguably the weirdest election of our lifetime, can have their lives destroyed."

"Rule of law has to mean one rule of law, not the variables you see weaponized right now by the administration."