Gas prices in Montreal and Laval shot up over the $1.50 marker for the first time this year, just cents away from the record set in 2014 of $1.53 per litre. 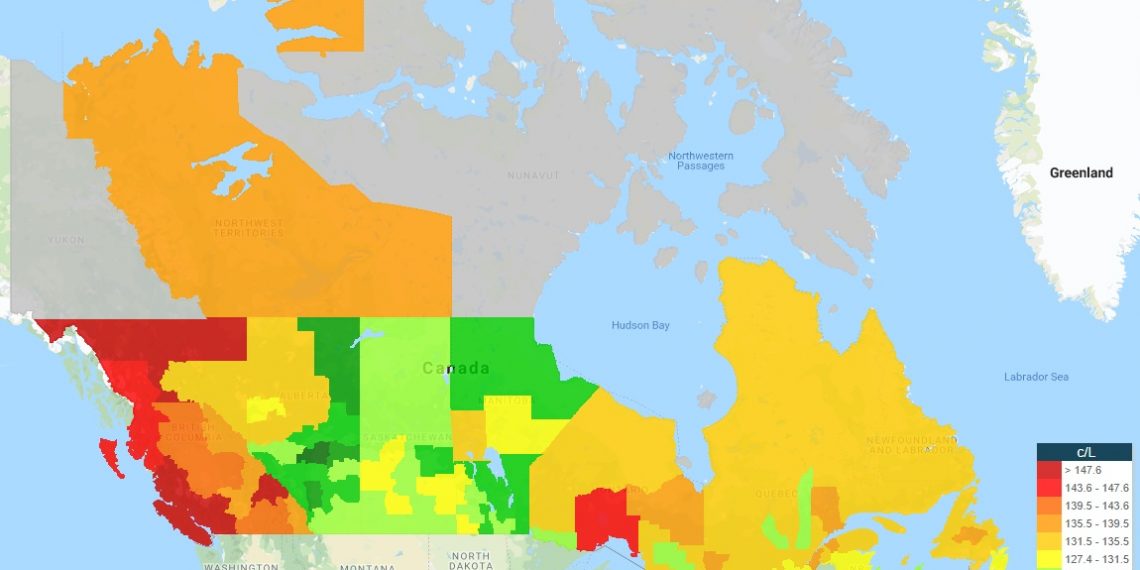 Gas prices continue to climb, and with no end in sight, many are up in arms, as the constant upticks stress consumers more and more by the day.

How high will the prices go? Sadly, nobody knows.

It’s during these times that Canadians rally together, and rightfully, collectively complain that something has to be done. A quick look at the heat map on GasBuddy  shows us that, we’re all in this together.

We already knew B.C. had the right to complain, but Quebec has decided to play catch-up in a hurry. Specifically, the Montreal area.

Gas prices in Montreal and Laval shot up over the $1.50 marker for the first time this year, just cents away from the record set in 2014 of $1.53 per litre.

If there’s any silver lining, it would be that the prices only skyrocketed in those urban areas, with no other regions nearby experiencing the same spike. The median price of regular gasoline remained at the still high at $1.44 per litre.

As expected, British Columbia is entrenched in the red coating of high gas prices, while people in the prairies, along with southern Ontario and parts of the Maritimes enjoy “lower” prices.

As of right now, it looks as though the lowest prices are in Mill Woods, AB at about $1.12 per litre, with B.C. residents going through absolute mayhem, at a high average of about $1.55 per litre.

When B.C. Premier Horgan was asked about the record-setting prices at the start of April, he said “we’ll see how it goes through the summer. And if there’s an opportunity to have the province step in and help, we’ll do that,” adding that he was still “hopeful there will be some correlation between the commodity price and the retail price.”

While promising that the government may provide relief, there were no specificities as to what that could entail. According to the Vancouver Sun, almost 34 cents of every litre of gas purchased in Metro Vancouver is controlled by the province, including the 17-cent TransLink tax, two motor fuel taxes totalling 8.5 cents, and the carbon tax, which rose to about 8.9 cents on April 1.

Another 1.5 cent per litre increase is coming on July 1, when the TransLink regional fuel tax goes up from 17 cents to 18.5 cents per litre.