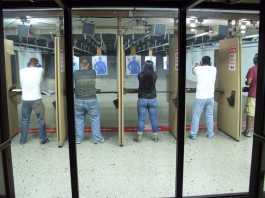 Senator Marilou McPhedran put forward an April 8th motion in the senate to introduce a handgun ban to Bill C-71 which was promptly defeated.

The motion went before the Senate Committee on National Security and Defence today and was rejected by the committee who voted 6 against and 2 for, while 3 senators had abstained.

Shortly after one of the votes, Senator McPhedran left the committee and was replaced by Senator Bev Busson.

McPhedran, who was named a senator by the Prime Minister in October 2016 has cited the New Zealand government’s recent swift gun legislation instigated by the Christchurch shooting as one of the motivations behind the call.

“Looking at how swiftly the New Zealand government is moving to prohibit the weapons used in the mass killings of Muslims in their places of worship, and looking realistically at the Canadian parliamentary agenda, the Government of Canada has run out of time unless the bill currently before the Senate is used for a new initiative to deal more effectively with the proliferation of handguns in Canada,” said McPhedran.

The Post Millennial contacted the Canadian Coalition for Firearms Rights (CCFR) to discuss the motion and the motivation behind it.

“It is unfortunately very common for anti-gun politicians to use senseless tragedies in other jurisdictions to promote their agendas. Personally, I think politicizing any tragedy is disingenuous,” said CCFR spokesperson Tracey Wilson.

“Senator McPhedran should be aware of the scope of the bill and understand that any amendments introduced after the 2nd reading in the Senate must fall within the scope of the bill itself. She has a history with the Coalition for Gun Control and was appointed by Trudeau, although she sits as an ‘independent’ Senator on the ISG.”

“Her actions today with this motion show a reckless and almost radical attempt to use the Senate to implement a ban on handguns, something that is under threat from the Liberal government at the same time.”

Currently Bill C-71, which intends on reforming many of Canada’s existing gun legislation by modifying background checks, record-keeping requirements and transportation is undergoing its second reading in the Senate.

Border Security and Organized Crime Reduction Minister Bill Blair has been commissioned to provide a report intended on studying further firearms bans. Initially, Blair promised that the consultation and investigation would be completed before the end of 2018, however a report has yet to be tabled by the minister.

“Canadians expect us to take the time to do it right and I’ve been doing my very best to take that time,” said Minister Blair on April 3rd.

The CCFR pointed to the lack of progress on the consultations as a reason to suspect the handgun ban motion. In her statement, McPhedran stressed the lack of time for the government to rush through a handgun ban into legislation before the 2019 election.

“It is incredible to think [Sen. McPhedran] tried to use her position as a Senator to  jump over the consultations being conducted by Minister Blair, of which we have not yet seen the results of. The fact her colleagues easily  voted against her motion shows how poorly thought out her attempt was.  It is noted she immediately left the committee meeting upon defeat of  her motion,” said Wilson.

While firearm advocates rejoiced over the decision to not pass the handgun ban in the Senate, some have warned that the Liberal might implement restrictions as part of their election platform.

“I would expect to see a ban on handguns and “assault rifles” (modern sporting rifles) as part of the Liberal election platform. Minister Blair hinted at this in committee last week,” said Wilson.

“There is also lots of talk about implementing central storage for restricted firearms, a dangerous and naïve idea that would collect tens of thousands of firearms under one roof, the very guns sought after by the criminal element.”

“One thing left out entirely of this debate with the Liberals is real change on working on crime. This government seems to content to further regulate legal, RCMP vetted gun owners, yet is soft on crime and terror. There is a cost to this inaction, as we see in the streets of our cities and towns, and that cost is in human lives. The violence will continue as long as the focus is on sport shooters and duck hunters and away from criminals.”

On April 3rd, Doctors for Protection from Guns rallied in Toronto during a planned “Day of Action.”

According to the group’s intended goals is a restriction on gun ownership and calls to “recover firearms currently in circulation.”

“Many people may not know that in Canada, the number of firearms owned  in the public domain has been increasing steadily. There’s approximately  one million classified as restricted firearms, and these are not  hunting rifles, these are handguns as well as semi-automatic rifles.  We’re concerned about that,” said Dr. James Byrne, a physician.