Following a string of crimes committed around the area of Fort Meade in Maryland, the families of service members stationed in the area are calling for their loved ones to be stationed at bases overseas.

Hannah Nightingale Washington DC
Sep 27, 2022 minute read
ADVERTISEMENT
ADVERTISEMENT
Following a string of crimes committed around the area of Fort Meade in Maryland, the families of service members stationed in the area are calling for their loved ones to be stationed at bases overseas.

In a Facebook group for relatives of service members at the base, which notably is the headquarters of the NSA,  users were seen expressing their concerns over recent crimes reported in the immediate area as well as Anne Arundel County, Maryland, where the base lies.

"While these are usually, isolated incitents, it’s very common," one user wrote. "It’s been a shame to work in courts in the area recently and see how unprovoked and more violent incidents like this are getting." 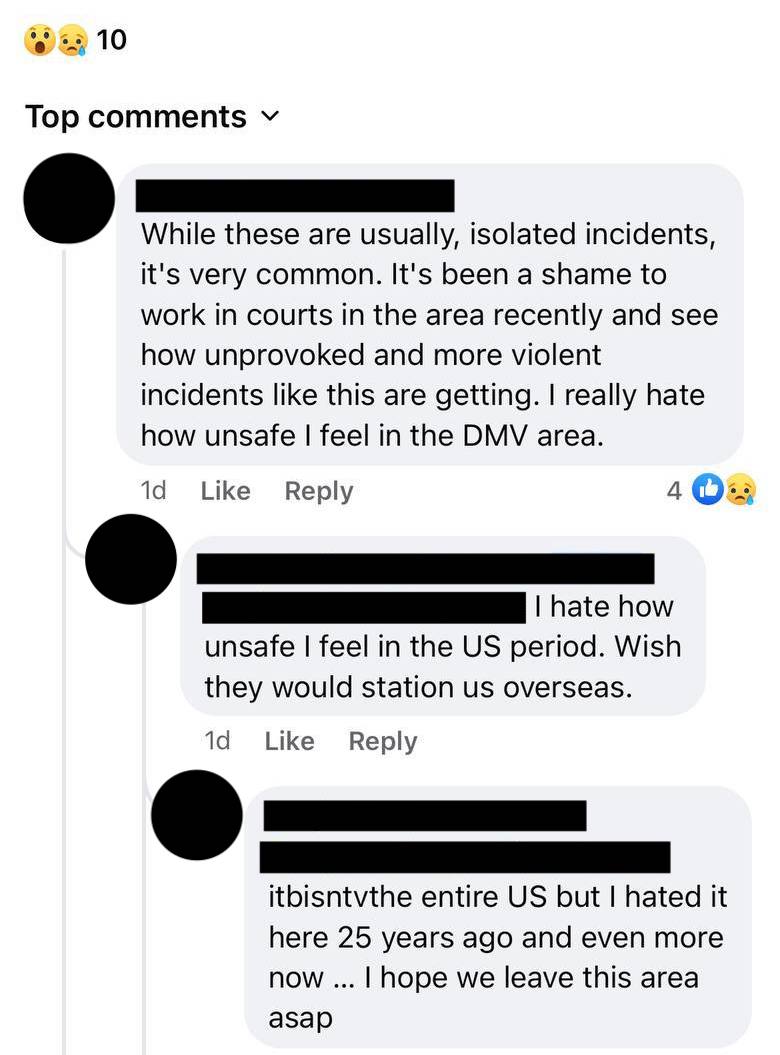 "I really hate how unsafe I feel in the DMV area," they continued, noting the "DMV," or the District of Columbia, Maryland, Virginia area.

"I hate how unsafe I feel in the US period," another user responded. "Wish they would station us overseas."

Another user said that they "hated it here 25 years ago and even more now," adding that "I hope we leave this area asap."

The concerned posts came as a shooting was reported on the 1500 block of Annapolis Rd, within the immediate area of Fort Meade.

According to WBAL, Anne Arundel County police officers arrived to a recording studio located at 1588 Annapolis Road at 2:30 am on Sunday for reports of a shooting.

One man is dead with another being injured. Police said that a large crowd of 60 to 70 people prevented officers from going inside the building, where a large party was taking place.

"Dozens of people let this man die. They listened to him agonal breathe, they let him bleed out and they just let it happen," said Lt. Jacklyn Davis, of Anne Arundel County Police Department.

"The group actually would not let the officers get close enough to be able to render aid. They had to wait for an exorbitant amount of extra officers to arrive to be able to actually form a line and push the crowd away to get the fire department in to start doing CPR and life-saving measures on this man," Davis said.

One man who works nearby told the outlet that the area right across from Fort Meade has seen an increase in crime.

"We have parties, gang-related and people coming around from different places joining up and having parties. Anything can happen in this area at any time anytime," the man said.

Another Facebook user wrote, "this is actually a pretty normal occurrence in this area. It all just doesn’t get put in the news." 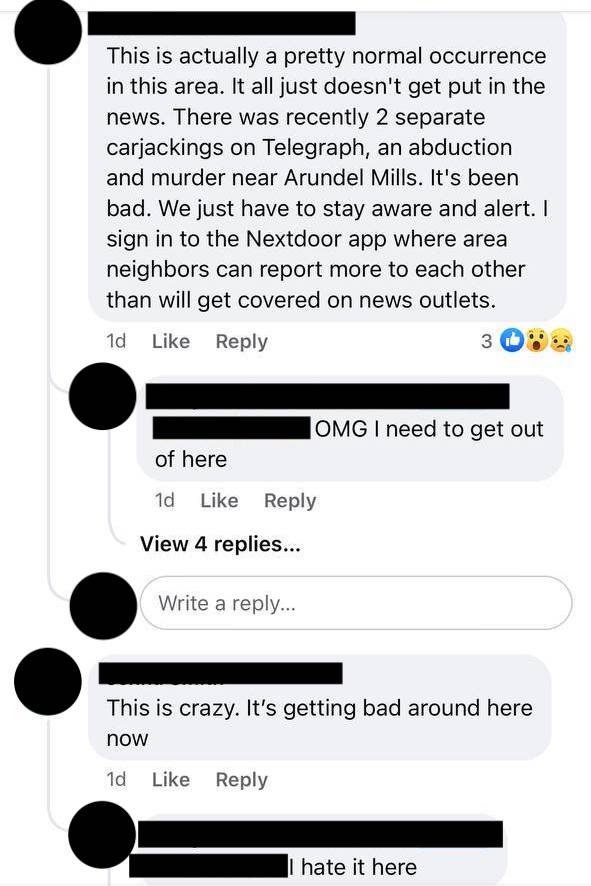 "There was recently 2 separate carjackings on Telegraph, an abduction and murder near Arundel Mills," they added. "It’s been bad. We just have to stay aware and alert. I sign in to the Nextdoor app where area neighbors can report more to each other than will get covered on the news outlets."

"OMG I need to get out of here,: one user responded.

"This is crazy, it’s getting bad around here now," another added.

Yet another user echoed the previous sentiments, writing, "I hate it here."

On September 21, Anne Arundel County police received a call about a possible assault and abduction, according to WBAL.

A witness told officers that she was in the Arundel Presence parking garage when she saw what she believed to be a man stabbing another man, with another assailant allegedly forcing the victim into a car.

The car sped away. A car, which investigators believe to be the same vehicle, was discovered two hours later at Leakin Park engulfed in flames.

After firefighters put out the flames, police found the body of a 39-year-old man who had been shot. The victim has been identified as Steven Deon Gillus of Hanover, Maryland.
ADVERTISEMENT
ADVERTISEMENT
Fort Meade