MUST WATCH: Disgraced IDW bro Sam Harris says we wouldn’t be so fragmented if more children had died of Covid

"If kids were dying by the hundreds of thousands from Covid at a rate of whatever it was, you know, 1 percent, but it was pretty much all kids. We would have had a very different experience." 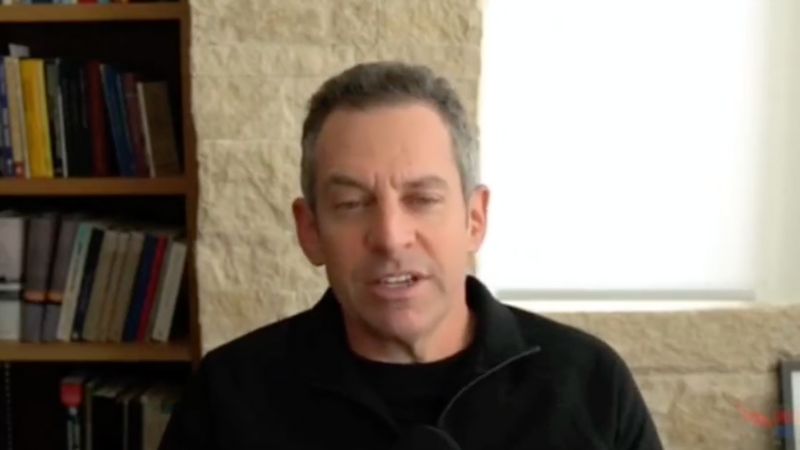 On Friday, prominent atheist Sam Harris went on the Uniting America podcast and told host John Wood Jr there would be less Covid vaccine skepticism if the disease were "preferentially dangerous to children rather than old people" and later said "give me kids being preferentially killed or injured by this disease."

Harris said, "Leave Covid exactly as it is, but just make it preferentially dangerous to children rather than to old people. Right? Just flip that around, the variable of age. If kids were dying by the hundreds of thousands from Covid at a rate of whatever it was, you know, 1 percent, but it was pretty much all kids. We would have had a very different experience."

"And there would have been no f*cking patience for vaccines skepticism, right?" Harris said. "And everyone would have recognized that this is not 'my body, my choice.' This is 'you're not going to kill my kids with your ignorance.' Right?"

"We have to get back to a world where we trust the experts," Harris said earlier in the podcast, making the point that society functions best as a technocracy.

Reports of myocarditis as a side effect of the Covid vaccine emerged almost immediately after the vaccine rollouts and persisted through 2022, despite experts saying otherwise.

In November of last year, after two years of studies, including those done by the FDA, reporting that myocarditis is a side effect from taking the mRNA-based Covid vaccine, Moderna and Pfizer have launched clinical trials to track how pervasive the heart problem has become in young adults and teens.

"But let's say the vaccines really did block transmission but then nothing else was, you know, all of the other mishegoss about how, you know, untested they are and how dangerous they might be and the spike protein and blah, blah, blah, leave all that in place. Just give me a little more transmission blockage. And give me kids being preferentially killed or injured by this disease," Harris said would be all that was needed for more conformity around citizens taking the vaccine en masse.


In October, evidence emerged that the vaccines were not as effective as experts previously said, specifically with regard to their ability to prevent transmission of the disease.  Pfizer executive Janine Small said in an EU hearing that her company didn’t know if her company's Covid-19 mRNA vaccine would prevent transmission, despite being marketed that it would.

Harris continued, "much of what was said about Covid at the time at which it was said, you know, the conspiracy thing and the platforming of people who were obviously unwell and unbalanced, professionally and mentally around vaccines, and their skepticism, the patience for that would have been nonexistent."

"We got unlucky at how benign this was," Harris said.

In November, Harris, a disgraced member of the Intellectual Dark Web, deleted his Twitter account after stating that he hated Trump so much that he would not have cared if Hunter Biden "had the corpses of children in his basement."

In August, Harris said Biden family corruption was "infinitesimal compared to the corruption we know Trump is involved in" and that censorship of the Hunter Biden laptop story during the 2020 election was a "left-wing conspiracy."

The Twitter Files revealed deliberate efforts behind-the-scenes at Twitter to censor stories around Hunter Biden's "laptop from hell," contents of which implicated Joe Biden's son to corruption connected with influence peddling and profiteering, especially with his overseas business dealings.