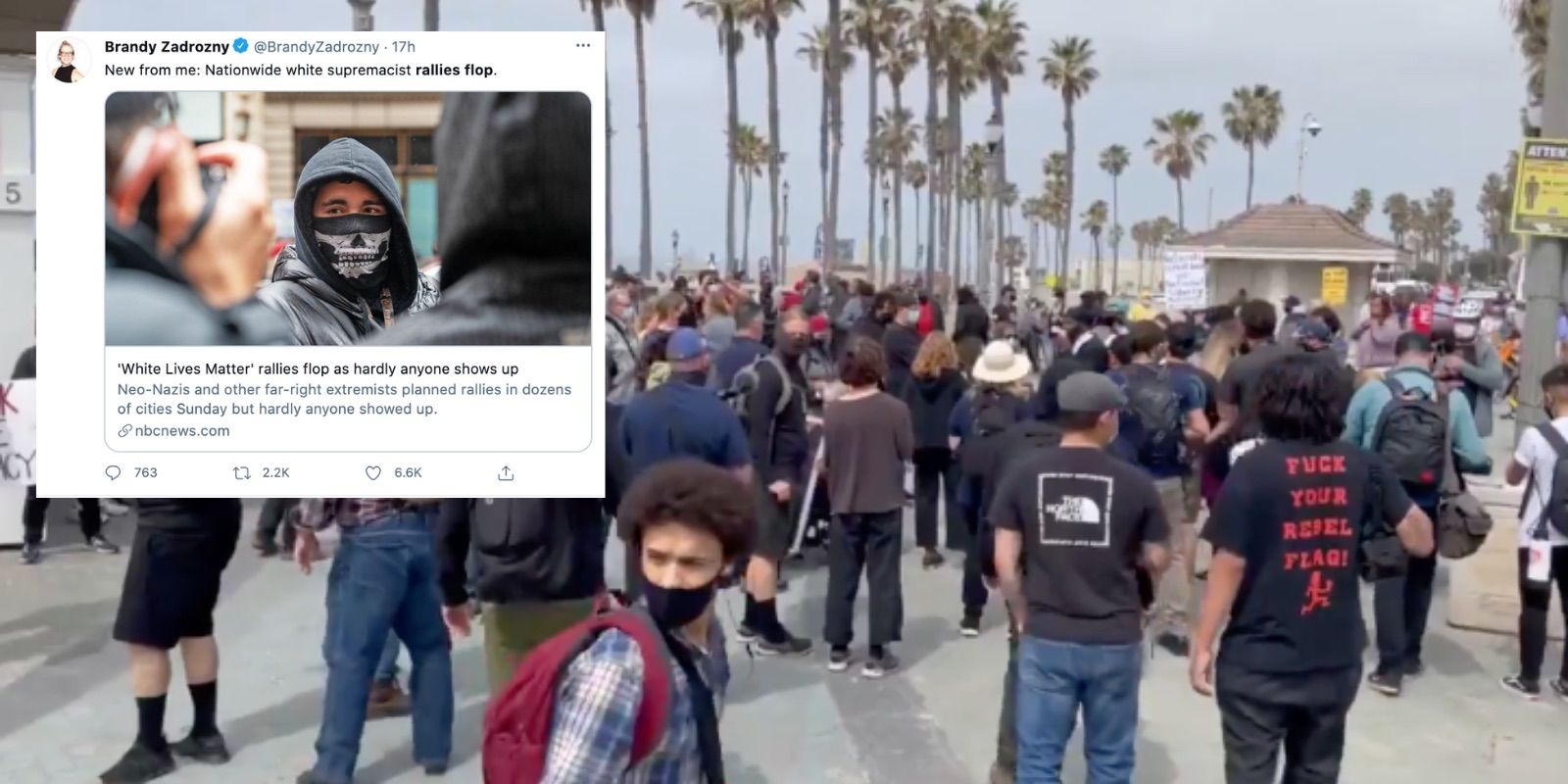 NBC ran a story about so-called "White Lives Matter" protests that were planned for the weekend, to which basically no one showed up. In Brandy Zadrozny's eyes, the lack of attendance meant that the white supremacists had simply been forced out of the public square and into the underground. But perhaps the lack of attendance means that there just aren't that many white supremacists out there.

"'White Lives Matter' rallies flop as hardly anyone shows up," NBC writes. "The poor turnout underscores how the country's unpopular and disorganized extremist movements have been driven underground."

The story goes on to describe multiple events that were nearly entirely populated by counter-protestors, Black Lives Matter activists, Antifa, and police. One "White Lives Matter" protest drew merely one protestor, a whole bunch of police, and counter-protestors who yelled at the one guy.

"The poor showing underscores how the country's unpopular and disorganized extremist movements have been driven underground by increased scrutiny from the media, law enforcement agencies and far-left activists who infiltrate their private online spaces and disrupt their attempts to communicate and organize," NBC writes.

In light of the fact that "White Lives Matter" protests garner barely a blip in attendance, it is hard to understand just why the mainstream media and cultural discourse is so obsessed with overturning and denouncing white supremacy. If white supremacy is so pervasive, and is the root cause of everything from crimes committed by black people against Asians to the Capitol riot of Jan. 6, where are all the white supremacists?

They were not in Raleigh, North Carolina, where "...a small crowd of antifa and anti-racist protesters gathered at the park where the 'White Lives Matter' march was planned. They marched around downtown behind a large white sign that read, 'WE ACCEPT YOUR SURRENDER.'"

They were not in New York. Instead of white supremacists, there were counter-protestors alone.

Nor were the in Philadelphia, where NBC reports that counter-protestors had a picnic, complete with the local delicacy of Tastykakes.

Huntington Beach, California, seemed to have the biggest turn out, with some angry people getting in each other's faces and ending with getting arrested. Yahoo reported that the events in Huntington Beach were spurred by "more than 200 counter protesters, including those from the Black Lives Matter movement."

As a result, "Police declared an unlawful assembly in the area of Fifth Street and Walnut Avenue shortly in the afternoon after the situation heated up and members of the two groups clashed... At least 12 people from the counter-demonstrations were taken into custody for various reasons as the crowd turned violent."

"Two of the largest Telegram channels dedicated to events in Philadelphia and New York City were shown to be traps created by anti-fascist activists," NBC wrote.

To bolster the idea that white supremacy is a massively huge threat, NBC notes the number of federal cases that have been brought against Capitol rioters. Four Trump supporters lost their lives, one at the hands of police, three due to medical incidents including a drug overdose. One police officer, Brian Sicknick, also died many hours after he engaged with two protestors at the event, but his cause of death has not been released. The men who assaulted him have been charged with that crime, and for having used the weapon of bear spray.

"Hate hasn't disappeared," NBC wrote, "but membership in formal extremist groups may have been disincentivized. So far, 369 federal cases have been brought against people accused of involvement in the Capitol siege, according to a database maintained by the Program on Extremism at George Washington University."