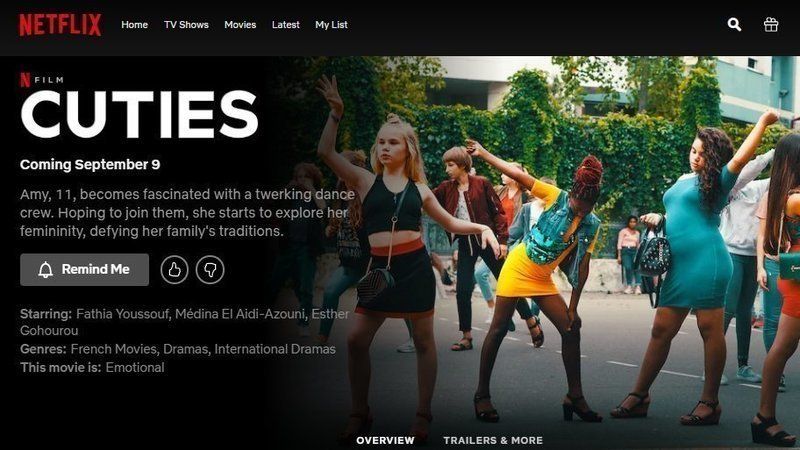 Netflix recently released the trailer for an upcoming film called Cuties—a French film that hyper-sexualizes 11-year-old girls as they form a twerking dance crew. A petition was kicked off shortly after the trailer was released that has, at the time of this writing, reeled in just shy of 28,000 signatures.

The trailer shows an 11-year-old protagonist grappling with wanting to join a twerking crew while balancing what appears to be a culturally conservative home life. The film seems to depict the protagonist stealing money, sneaking around, and experiencing the faux fame that comes with girls exposing their bodies on social media.

The film was initially released on January 23 at the Sundance Film Festival, competing in the World Cinema Dramatic Competition sector, and winning the Dramatic Jury Award.

Social media users have criticized the film for not only appearing to support sexualized activity by underage girls, but by having a different advertising scheme in its home country of France than it does in the US.

The French title of the flick is Mignonnes and includes a film poster showing a group of four girls more or less having fun in a materialistic way, swinging shopping bags as they hop and skip down the cobblestone road. This is shockingly different than the advertising scheme Netflix chose to distribute, which depicts the pre-adolescent girls dressed in tight-fitting clothes and posed in compromising positions, resembling strippers.

One Twitter user tweeted: "its interesting to compare the french version of the cuties poster to the american version... like the French version has more "kids having fun!" vibes, while the American version is just fucking.... gross. I feel like the #Netflix marketing team has a lot to answer for."

The Post Millennial contributor Anna Slatz also took to Twitter, giving her thoughts on the matter: "I’m sorry what the f**k is this pedophile bullsh*t."

The anonymous Internet forum 4Chan, known for posting what many consider to be controversial material, has elected to bar users from posting images of the film on its message boards.

The petition to have the film removed has a goal of 35,000 signatures, making a $2 dollar donation optional for signatories to make the removal possible.