Two mosques in New Zealand have been targeted in a mass shooting where several people who were worshiping have died. 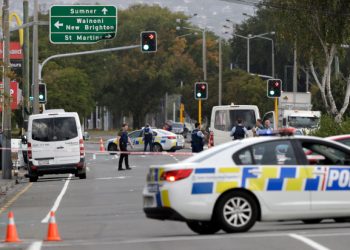 Two mosques in New Zealand have been targeted in a mass shooting where several people who were worshiping have died.

The shooter, who recorded his attack online has since been arrested by the police. On his rifle, the suspected shooter named Alexandre Bissonnette, who shot up a mosque in Quebec City on January 29, 2017.

49 mosque-goers were murdered in the attack, while sources cite anti-immigrant sentiments as a reason for the attack.

According to one report, an individual who claimed responsibility for the attack left a 74-page anti-immigrant manifesto shortly before the incident.

In the video posted online, it depicts a man driving up to the site of the incident and opening firing on a crowd of innocent Muslim worshipers before firing upon the street.

The situation is ongoing and police are involved in the circumstances.