Djokovic's Australian visa has been cancelled after the government discovered the document did not accommodate his medical exemption to the COVID-19 vaccine. 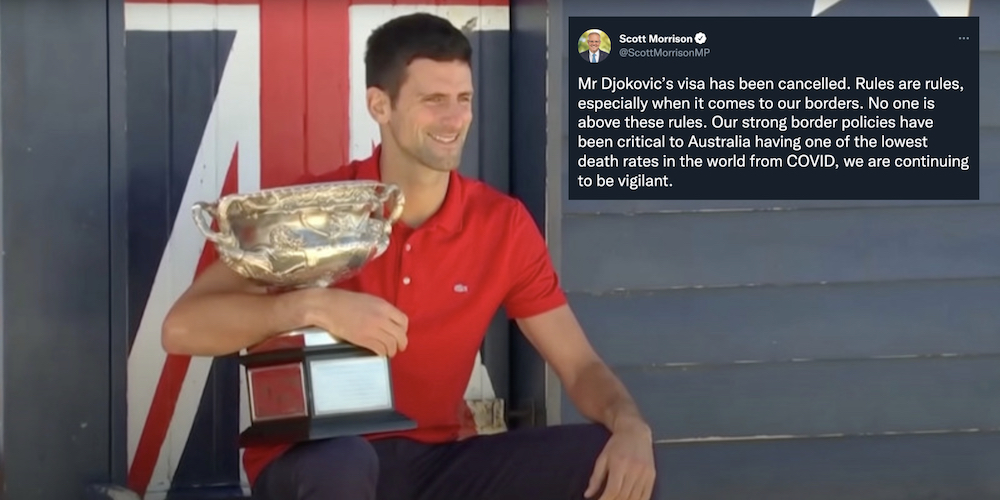 Djokovic's Australian visa has been cancelled after the government discovered the document did not accommodate his medical exemption to the COVID-19 vaccine.

Novak Djokovic arrived in Melbourne late Wednesday night ahead of the Australian Open, which begins January 17. The competition requires every participant to be vaccinated against COVID-19, but recently granted Djokovic a rare medical exemption.

According to Reuters, Tennis Australia granted Djokovic his exemption following a "rigorous review process" by independent panels of medical experts. The decision was later confirmed by the Victorian state government.

Upon touching down at Melbourne International Airport, however, Djokovic was detained. As BBC reports, he was questioned "for hours," and eventually told he would be deported, not due to his vaccination status, but rather because the visa he had filled out did not permit medical exemptions.

His lawyers are planning on challenging the decision.

According to a statement from the Australian Border Force, "Mr Djokovic failed to provide appropriate evidence to meet the entry requirements to Australia, and his visa has been subsequently cancelled." They go on to add that "non-citizens who do not hold a valid visa on entry or who have had their visa cancelled will be detained and removed from Australia."

Djokovic's father released a statement expressing outrage over his son's treatment, warning that Serbians supported him and would "gather on the street" in protest if necessary.

The tennis legend has long been ambiguous about his vaccination status, calling it a "personal decision," and has expressed concern with vaccine mandates.

Following Tennis Australia's decision to green-light his medical exemption, Djokovic faced criticism from both citizens and government officials of the sunburnt country, who argued that "rules are rules", and that he shouldn't be given special treatment.

Speculation arose around whether Djokovic had been granted his exemption based on his personality alone, but organizing officials vehemently stated that the double blind assessments were carried out without revealing personal data, and thus no special treatment could have been given.