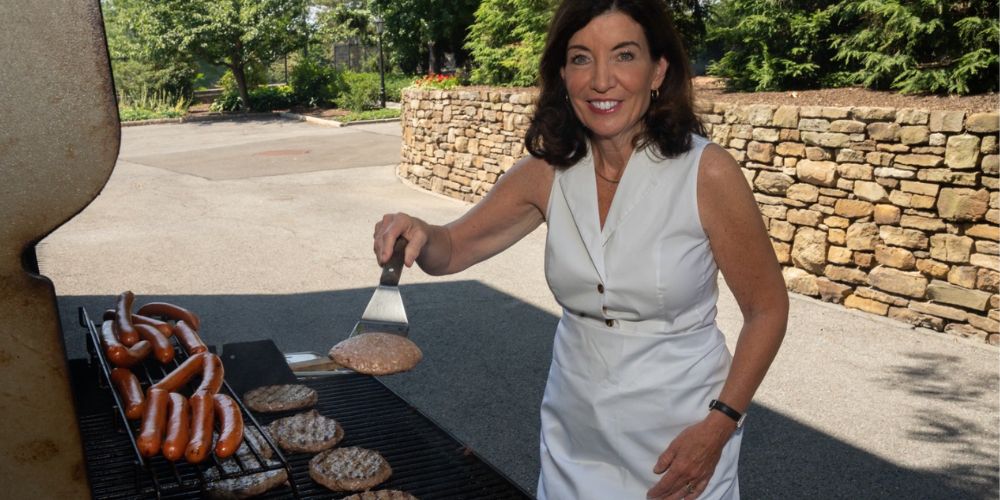 Unelected New York Governor Kathy Hochul took to Twitter on Sunday and posted a photo of herself allegedly hoisting some hamburger meat off a grill and wrote, "Great day for a barbecue, New York!"

The tweet was immediately lampooned by a variety of Twitter users as they pointed out the numerous logical inconsistencies in the photo. "How embarrassing and fake are politicians? Well, embarrassing enough to cook FROZEN, pre-made burgers on the grill but having someone prep a fresh one to put on the spatula," wrote Jesse Kelly

Kelly's critique of Hochul's panoply of BBQ honed in on the clear visual discrepancy between the perfectly circular (frozen) patties on the grill and the discolored, fresh meat she's lifting above.

"They've redefined 'recession' and 'woman,' but we must draw the line at 'barbecue,'" wrote Angela Morabito.

Many Twitter users noticed that Hochul's attire was white and unblemished from the usual grease and splatter that comes from cooking meat in open-air.

"I too am quite the grillmaster and I must say I love your brand new, spotless apron," wrote parody account @HollyBriden.

@BruinJustine rhetorically asked, "Who the hell wears a white dress while grilling."

Not everyone was making jokes, as @HershAmy, a "Songwriter, performer and fundraiser" from the Hudson Valley wrote "Hello to our wonderful governor. Make sure you throw some vegetarian burgers on there!"

Many users noted that Democrats have a history of staging BBQ events and posted similar scenes from the likes of former Virginia Governor Terry McAuliffe and North Carolina politician Cal Cunningham.