It's been revealed that the Office of the Director of National Intelligence (ODNI) poorly photoshopped a woman in a wheelchair and a blind man into the stock photo used for the cover page of its annual demographic report. 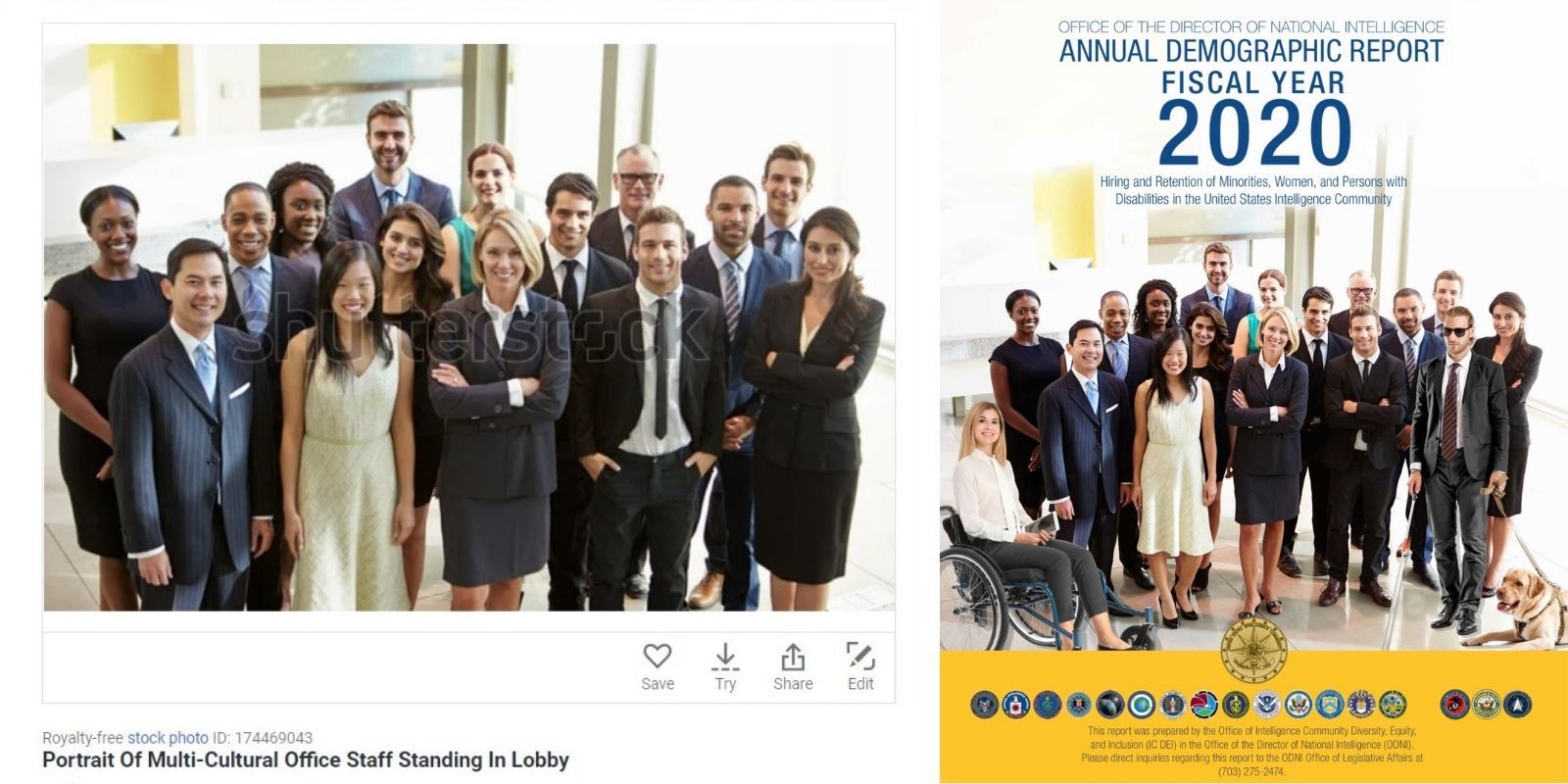 It's been revealed that the Office of the Director of National Intelligence (ODNI) poorly photoshopped a woman in a wheelchair and a blind man into the stock photo used for the cover page of its annual demographic report.

For the cover of its annual diversity report, ODNI purchased a stock photo called, "Portrait Of Multi-Cultural Office Staff Standing In Lobby," and then photoshopped a woman in a wheelchair and a blind guy into the image.

In response to the report's release, DNI Avril Haines, who was sworn in under the Biden administration on Jan. 21, stated via press release that the Intelligence Community (IC) should "reflect the diverse makeup of America and demonstrate that we are fostering an environment where every professional can succeed."

"Promoting diversity, equity, and inclusion is fundamental to our democratic values and critical to meeting the IC's mission," Haines wrote Thursday, the day of the report's release. "This takes work every single day. We are committed to doing more to address this critical issue and accelerate our progress."

The annual report discloses key metrics outlining the hiring and retention of minorities, women, and persons with 2020 disabilities in the United States intelligence communities in order to "drive diversity, equity, and inclusion."

ODNI's report is per the National Security Act of 1947 and congressional directive under Public Law 116-92, section 5704,1 which requires the Director of National Intelligence to submit an annual demographic report on the employment of minorities, women, and persons with disabilities (PWD).

The 2020 fiscal year report summarizes the aggregate representation of individuals employed in the Intelligence Community (IC), pay grade representation, hiring, promotion, and attrition of minorities, women and PWD. Such reports have been published since 2016 to "provide transparency into the IC's progress and ongoing efforts to increase demographic diversity."

According to the report's findings, the number of minorities in the IC's civilian workforce increased to 27.0 percentage. Among the minority demographic groups within the IC, most identified as black or African American (12.3 percent), followed by Hispanic (7.0 percent), Asian (4.3 percent), two or more races (2.7 percent), American Indian/Alaska Native (0.3 percent), and Native Hawaiian/Pacific Islander (0.2 percent). Race or national origin (RNO) was not reported by 1.1 percent of the civilian workforce.

The amount of women remained at the same level as the previous fiscal year reported, plateauing after demonstrating incremental gains in fiscal years 2018 and 2019. Meanwhile, the percentage of PWD increased to 11.9 percent.

ODNI is charged with leading a coalition of agencies and organizations by providing intelligence integration for the Intelligence Community (IC), whose mission is to provide "insightful, objective, and relevant" intelligence to inform leadership decisions on national security issues and events.

Members of the IC provide the "nuanced, independent, and unvarnished" intelligence that policymakers and warfighters need to protect American lives and interests anywhere around the world, according to the annual report.