The UK is in an impossible position, with no sign of how things will eventually be resolved 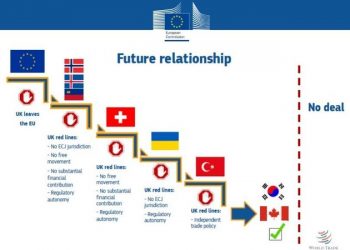 When Canadians woke up on June 24, 2016, many of us learned that the United Kingdom had voted to leave the European Union in what was widely known as the Brexit Referendum. The referendum was called by Conservative Prime Minister David Cameron, who did not think that British citizens would actually vote to leave, and had thought the referendum could finally hush those pesky “Brexiteers”.

Prime Minister Cameron resigned immediately following the referendum, and the party chose Theresa May as the new prime minister. Interestingly, less than a year later, the new Prime Minister Theresa May called an early election despite already having a majority in parliament. The following video best sums up how that went.

The early election saw the Conservatives lose their majority and to this day survive with the support of the DUP, an Irish unionist party that was considered too far-right for the liking of many Conservative supporters. The DUP only had two seats going into the election, but the ten that they won were enough to become a kingmaker for the tories.

It became the subject of significant public ridicule, especially since the entire premise of the election was for Theresa May to win her own, larger majority so that she could march into those Brexit negotiations with a strong mandate that signalled that the Brits would have her back.

The words “strong and stable” came to define the election campaign. Theresa May wasn’t campaigning to win. After all, she already had a majority before this all started. She was running to form a “strong and stable” government which she did not get, but at least this happened.

The staircase image released by the EU in late 2017, which appears above, illustrated exactly why the EU already knew that Brexit negotiations would not make much progress, and they turned out to be spot on.

The top step has the EU flag, representing full EU membership. It is an unacceptable end result for the UK because, well, that’s what this whole thing is about in the first place. No good.

As we move down the steps, consider that the UK would have to essentially accept “taxation without representation”, as they would no longer have a say in European Parliament but would still have to follow at least some of its rules if there is to be a yes-deal Brexit.

The second step has Norway, Iceland, and Liechtenstein. These countries are not EU members are part of the EEA, which allows them to be part of the EU with respect to free movement across borders. That requires the UK to submit to the jurisdiction of the European Court of Justice, allow free cross-border movement, continue paying the EU, and follow its regulations. No good.

Switzerland, who shares a unique relationship with the EU, is on the third step. It is integrated with the EU not by membership, but by a number of agreements. Those treaties, due to the geographic and economic reality of Switzerland, mean that Switzerland still has open borders, contributes financially to the EU, and has to follow the EU’s regulations on good and services. No good.

The next steps have Ukraine and Turkey, that have looser relationships with the EU. Even those involve some sacrifice of sovereignty.

For true independence, the UK must go all the way down to the bottom of the staircase, which would involve redoing all of Britain’s trade relationships essentially from scratch.

It would leave Britain (at least briefly) as the only country other than Mauritania to have no free trade agreements.

When those trade agreements get negotiated, the British will be in a much weaker position now that they represent an economy of under 100 million, rather than the better part of a billion people that were represented by the EU. That was a big part of the whole point of having an EU in the first place.

The situation gets even worse

As if that problem wasn’t big enough, there is also the situation with Northern Ireland. In the shortest possible summary, the UK (which includes Northern Ireland) have a 1998 agreement with the Republic of Ireland not to have a closed border. That border, well, let’s just say has previously led to a lot of “trouble“.

Ireland is a member of the EU, and Brexit raises the spectre of renewed violence, especially if there will need to be a border across Ireland. Not having a border, however, will compromise Brexit, since there would still be free movement between Ireland and both the EU and the UK. Irish reunification might simplify things, but that would be a whole separate behemoth of an issue by itself.

And just like that, as these unsolvable problems floated around in the minds of politicians, almost three years have passed an a solution has not gotten any nearer.

On Tuesday, March 12, the House of Commons voted down the prime minister’s proposed Brexit deal. The government was criticized for negotiating right up until a few hours before MPs were to vote on it. MPs were not happy that they would have to vote on a pivotal motion in that country’s history and not get adequate time to scrutinize it.

However, without the last minute negotiations, the deal as it previously stood had no chance of being passed by parliament anyway. Since the prime minister deal was voted down, the big issue now concerns the March 29 deadline.

A vote was scheduled for today (3pm ET) to determine whether the UK would respect the March 29 deadline and leave the EU even without a deal if none is passed by then. A hostile amendment to the vote tried to permanently eliminate the possibility of a no-deal Brexit, regardless of the deadline.

By 312-308, the motion to take the no-deal Brexit off the table passed. Although the Conservatives hold 314 of 650 seats, Prime Minister May decided not to force her MPs to vote in any particular way.

Legally speaking, as of now, a no-deal Brexit would still happen on March 29 if no deal is reached by then, since motions cannot override a statute. The EU could also veto an extension of the deadline.

By 164-374, a puzzling motion for a “managed no-deal” was defeated. It would have allowed for a no-deal Brexit that ignores the prime minister’s deal and opts for a trade relationship whose terms are decided as it goes. It sounded like the intention was that the UK would have a “no-deal Brexit”, but the UK and EU would simply just continue acting as if nothing had changed.

The motion passed by 321-278. The announcement was immediately followed by a speech from the prime minister, whose voice had very noticeably been worn out in recent days.

MPs’ shouts made it clear that they were frustrated that the prime minister kept giving them multiple choice questions that they did not like. The atmosphere was one of stubborn refusal to compromise from partisan positions. It has been the decade of toxic tribalism, a societal mood that spread across borders and oceans.

The UK put itself in a situation where it faced a number of options, none of which were much of a political win for anyone. Perhaps 2015+4 is just not the year for serious compromise.

For understandable reasons, the EU seems to believe that the UK has put itself in an impossible position that could not be resolved with more time, and so would probably be reluctant to drag on negotiations.

The opposition seems to be set on making sure that Brexit never occurs, and an easy way to do that would be to call a second referendum. The British are undoubtedly sick and tired of this seemingly impossible game, and might be eager to give parliament a “never mind” vote on Brexit.

There were no answers at the end of the day that was supposed to decide the answers to some serious questions. With 16 days do go, and nearly 3 years since the referendum, there is still no solution in sight.

The lack of an answer at this point, however, could be the best answer we’ve gotten yet. It looks like it will be a no-deal Brexit, or no Brexit at all.