Only a scandalous budget could possibly distract Canada from SNC-Lavalin

When their backs are against the wall and no strategy is off the table, there may be no limit to the amount of long-term damage the Liberals are willing to cause for their partisan short-term gain. 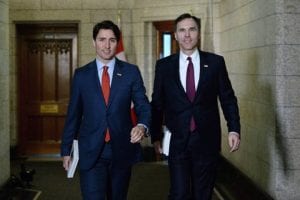 This Tuesday is federal budget day.

It is also the day when the Justice Committee will meet behind closed doors to decide whether former Attorney General Jody Wilson-Raybould should be invited back to respond to recent testimonies by Trudeau’s principal secretary, privy council clerk, and deputy minister of justice.

If the Liberals plan to invite her back on budget day, that would be a welcome political blunder. No government wants their budget to be overshadowed in the news cycle, much less their election year one.

For weeks now, it has looked like the stars are aligned for a monster-budget, with Canada’s recent slump in GDP growth to serve as a convenient Keynesian excuse.

The Justice Committee meeting on Tuesday will not be able to create as many headlines compared to if it had been public. Most pundits agreed that that was the reason that the Liberals abruptly shut down the previous committee meeting before even discussing a possible return by the former attorney general.

I would hope there is no chance that the Canadian people and media would let that slip just because it is budget day. If it does, it would be because the budget is a scandal in and of itself.

The budget is said to include a pharmacare program, which has been studied for the past 9 months by a committee chaired by former Ontario Health Minister Eric Hoskins.

It is also said to include “learn to code” funding to help individuals become retrained for the jobs of the future.

If this year’s budget causes an outcry, it might actually benefit the Liberals’ political calculus. A “Green New Deal” level radical budget is the only kind that will cause such fierce debate that it would actually have a hope of drowning out SNC-Lavalin just long enough to break the public’s attention.

That shift in public discourse would benefit the Liberals as it would rally progressives into defending whatever outrageous spending might be proposed.

The Liberals, after all, are a party of elections.

When their backs are against the wall and no strategy is off the table, there may be no limit to the amount of long-term damage they are willing to cause for their partisan short-term gain.